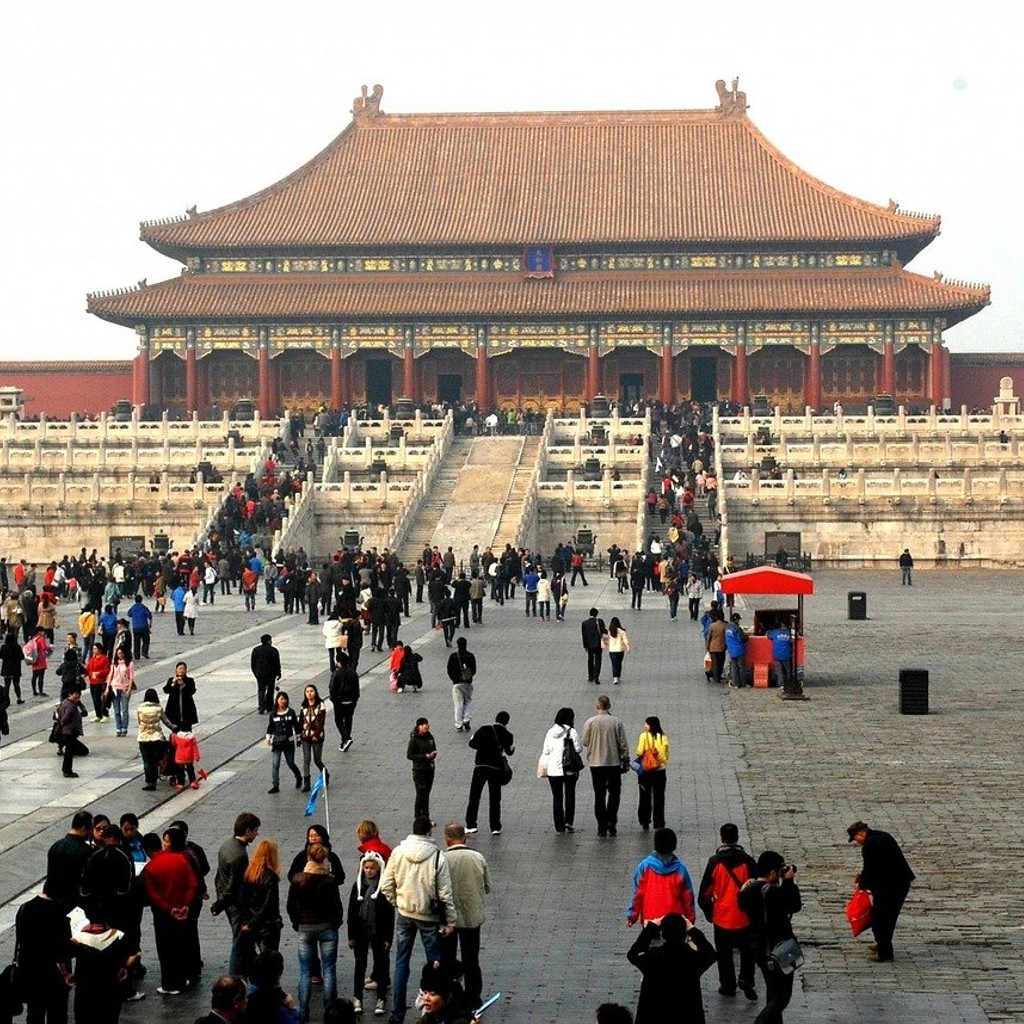 Working out in Tiananmen Square

So here we are, standing in flimsy running gear, standing for what seemed like an hour squeezed in the crowd, our heads protruding above the pack like a couple of emu’s, the ceremony finally started.

Tiananmen Square, just the name alone demands reverence! This was where Mao Zedong declared the founding of the People’s Republic of China in 1949 in front of over 1 million of his faithful; this was also where pro-democracy students protested in 1989 – images of which were broadcast across the world. This is where every tourist who visits Beijing makes a pilgrimage, we were here a few days ago as well, faithfully following the red and white flag held up by our tour guide careful not to lose him amongst the crowds of tourists all walking the same well worn route from Mao’s Mausoleum north through to the Forbidden City.

However today was different, for a start it was just after 6am was around zero degrees, an eerie fog hung over the square and there was not a tourist in sight. Every morning at dawn, tens of thousands of locals turn out to watch the raising of the flag and we were eager to join them on our last day in Beijing. To make our visit more interesting we chose to combine our pilgrimage with a run around the square – a unique way to keep the fitness routine going and even better to ward off a potential hangover. So here we are, standing in flimsy running gear, to the amusement of the locals who are all decked out in jackets and gloves! After what seemed like an hour squeezed in the crowd, our heads protruding above the pack like a couple of emu’s, the ceremony finally started. Out came the guards all marching at the same pace, the flag goes up, a scratchy song plays (which everyone knows the words too…except us!) and then the crowds disperse! That’s it, all over in a couple of minutes – we got out of our warm Westin Heavenly beds for that?

Now it was a matter of a jog around the square to get our circulation going and a quick cab back to the hotel for the magnificent buffet breakfast. That was never going to happen; today we were the tourist attraction! Every 20 meters or so we were stopped for photographs – not sure whether it was my female friends legs or my Western Bulldogs jumper that attracted them! Either way we are now in numerous wedding photos and family albums across China. (Yes people were getting married at 6am!) We couldn’t understand why we were an oddity as capitalism was well and truly alive in today’s Beijing and here is a city that will be shortly hosting the Olympics. Hey, get used to it guys, soon your city will be overrun with athletes – ok, so we are not athlete material but let’s just keep that between us for now!

After jogging past many buildings designed to be imposing, with names like “Great Hall of the People” and “Monument to the People’s Heroes” we finally made it back to the big gold-framed picture of Mao up on the big red wall.

After one final photograph with a little old lady trussed up in her full-length puffer jacket (The one item the Chinese don’t export – thankfully) next to the slogan “Long Live the Unity of the Peoples of the World”, we felt we had done our bit for world peace and it was time to get a taxi back to the hotel.

There was a small issue here…. someone forgot to tell us it was peak hour, not an empty taxi in sight! By now we had no feeling left in our bodies so we decided to just run down a busy side street to try and stay warm. After what seemed like hours, I spotted a taxi down an alleyway and split away from Ranni to grab it. On top of the usual challenge of directing a Beijing cabbie on how to get to our hotel, I had to use my best sign language to explain that we needed to also pick up the half naked freezing chick on the corner. Actually that wasn’t hard, blokes are the same the world over!

We were staying at the Westin Beijing, a brand new hotel in the middle of the Financial District, miles from anywhere useful and in a street that has only just been created, much to the confusion of geographically impaired taxi drivers of this city! It was a brilliant hotel, great rooms, fantastic restaurants, pool, gym etc – it just lacked any evidence of being in China! Even looking out the window didn’t help as similar characterless modern buildings surrounded the hotel. As far as the eye could see (which wasn’t far due to the incessant smog) were brand new featureless 8 lane roads which only months ago no doubt were bustling neighbourhoods called Hutongs.

Our visit to Beijing actually commenced in one of these Hutongs with a couple of nights in a traditional style Courtyard Hotel near Tiananmen Square, down a quiet alleyway where it appeared that life here hasn’t changed for centuries. Our hotel – Beijing Sihe Hotel, the former residence of a famous Chinese artist (not modern art from the look of things!) was built in the Qing Dynasty, which means it must be a few hundred years old! The brochure probably best describes it – “The spacious guest rooms are sharing the beautiful inner and outer courtyard with each other, and decorated by the antique furniture those are carved with dragon and phoenix, the symbol of Chinese ancient nobility. This is representative of nature and elegance, to bring you the experience of luxury and noble”.

This was exactly how we felt about it, every room was slightly different and in deference to Ros’ seniority we allowed her the privilege of accepting the upgrade to a luxury room – which ended up being the smallest room in the hotel – probably had better Feng Sui in it’s favour…who knows?

A full Chinese breakfast was included but unfortunately each morning we left too early to sample the dumplings, which I hear, are to die for. Well I think that’s what the receptionist was trying to tell me! I’m really not sure what our conversation was about as I felt bad about disturbing her as every night at midnight she would make up her bed behind the desk, carefully remove her name badge (which read 005) and go off to sleep – her feet propped up against the safe which housed our valuables. So possibly the 6am conversation we had in the dark, where I asked for an iron whilst she fumbled around for her name badge had nothing to do with dumplings! Sadly we had a conference to go to on the other side of town otherwise we all agreed that this tiny hotel in the Hutongs was one of the highlights of a city that every day is sadly looking more and more like Singapore.

Everybody who visits Beijing needs to do a city highlights tour, which we did by taking a slice out of one of Travel Indochina’s small group journeys. Better than just jumping on a coach, you get to have lunch with a local family, whiz through the Hutongs on a rickshaw, participate in a tea making ceremony and see the world famous Chinese acrobats. You also get to visit Tiananmen Square and the Forbidden City which was amazing but I think I have already reached my lifetime temple capacity so apologies for the lack of description on this incredible city that dates back 500 years and was hidden from the public until recently! Actually parts of it are still hidden under scaffolding as time and the changes to the environment are taking it’s toll – but don’t worry come Olympic time it will be all be in pristine condition – as will the rest of Beijing.

Another must, no better than that, a reason alone just to go to China, is to walk on The Great Wall. No schoolbooks or documentaries do it justice, to stand on the wall seeing it snaking off in both directions disappearing into the mist is amazing. We chose to visit one of the lesser-known sections of the wall at a place called Mutianyu, which is 90km from Beijing. Here there were very few foreign tourists, however local school groups and soldiers made up for them! After surviving the T-shirt sellers at the bottom we caught the Cable Car up, scoring the lucky carriage with the words “William Clinton rode in this car” inscribed proudly in the window!

Surprisingly on the wall it wasn’t too crowded and during our 3-hour walk there were many photo opportunities without a soul in the viewfinder. The surface was quite uneven in places and very steep in parts, which made for some strenuous walking – this was one day where the cool temperatures were appreciated! We came down the mountain in style, screaming down the slope in a luge, more reminiscent of Torino than Beijing. The whole way down there were guards on the tight bends yelling “faster, faster” or was that “slow down”? Not sure, I think I need to work on my Cantonese or was that Mandarin – damn I shouldn’t have slept on the bus, I only half remember our guide giving us some basic lessons!

Language was not an issue at the markets in town. Everybody spoke English. “You kill me”, “I no eat”, “Too much”, “You crazy”, “Special Monday price”. They had all the lines and tried everything to get you to buy an “original” designer item; one lady even jumped on my back and tried to bring me down in a headlock!! In the end the only way to survive was to just give in and start bargaining. I found the best tactic was to just sit in a shop and describe what you wanted, they would send someone out to find it, you then ask for 10% of the price they quoted and end up paying 20%. Five bags full of shoes, CD’s, handbags, t-shirts and jeans later and I knew my family would be happy!

For my own pleasure I found the back streets the best. Here I loaded up on a Mao shoulder bag, a Mao 1960’s clock, Mao’s little red book, Mao’s propaganda posters and even a Mao watch where he waves back at you if you remember to wind it up. I was finally content, I had found the found the China I had come all this way to see!

Can’t see anything wrong with that, do yourself a favour and visit Beijing whilst remnants of China still exist! 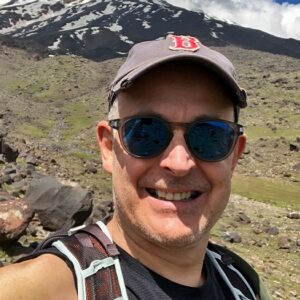 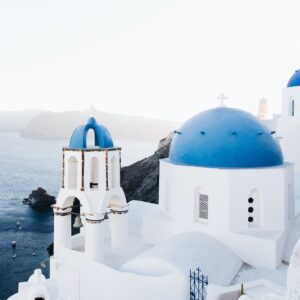