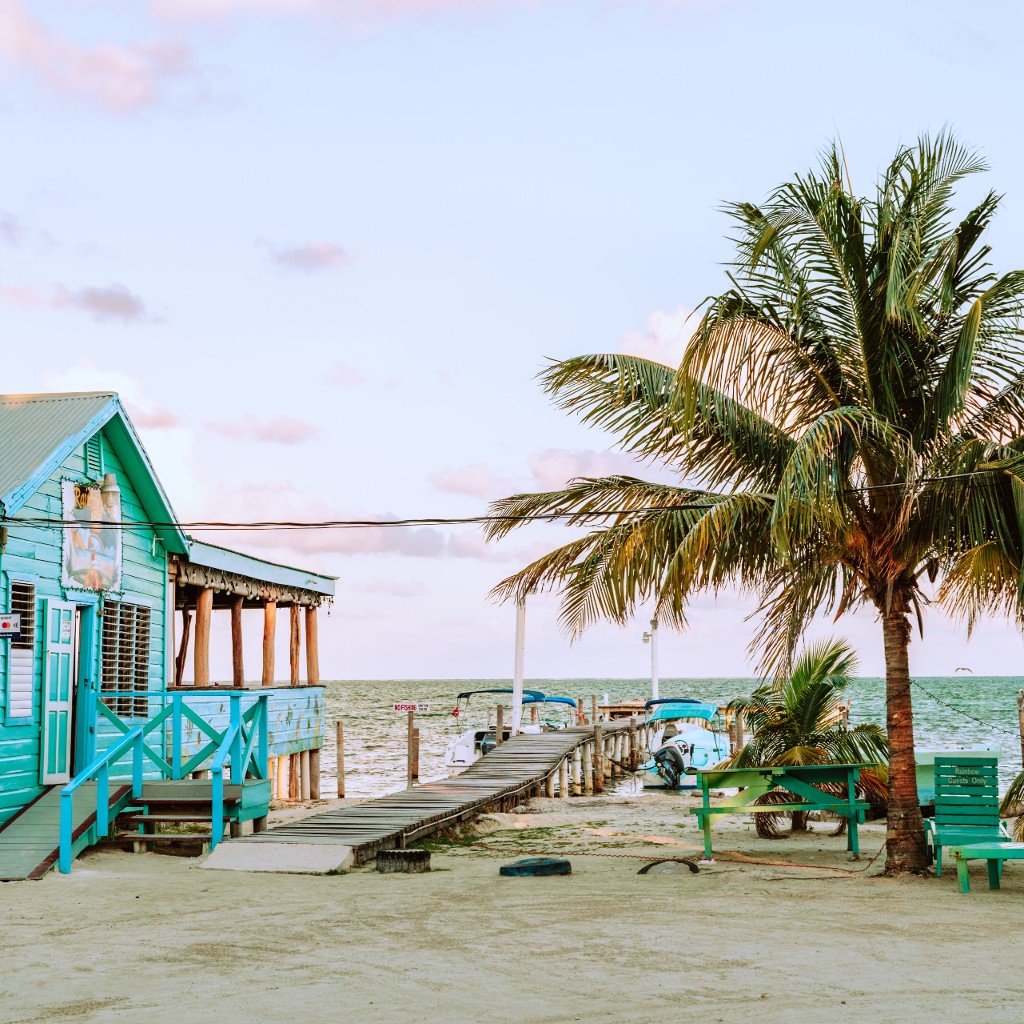 Where on earth is Belize

Our guide grabbed a 5-foot shark then swam with it to Sheridan so she could get a close-up, we all then had a pat – he then did the same with a stingray.

Where on Earth is Belize? It is a long way from everywhere but fairly close to paradise – if paradise is somewhere near here, no Belizean would make the effort to find it and if they did a hurricane would probably blow it away before they got there. Life here on the Cayes is very laid back; there are no cars, no traffic lights and only a handful of tourists. Most people spend their time lazing around in hammocks listening to reggae. I’d like to say Caye Caulker is beautiful but that would be creating a false illusion that we are staying on an exotic tropical island in a magnificent resort with absolute beach frontage on a gorgeous white sand beach. This place is 1km long, flat, has two main roads (Front street and Back Street), those houses that have been painted are bright colours, the rest look like they have never seen a coat of paint. Weathered houses on stilts with rusty roofs cover the majority of the island, the beach is non-existent and there is nowhere to swim except off the end of one of the piers. My 6-year-old daughter, Sheridan counted at least a dozen scruffy dogs, a couple of cats and the odd chicken. Mix that with a few Rastafarians and Mexicans and that pretty much covers the population. hammock

Doesn’t sound like the place you would travel for 40 hours to get to but it is exactly what we were looking for!! Caye Caulker really grows on you; even our dilapidated house with the view of the back of another dilapidated house is wonderful, with a huge veranda, numerous hammocks and 40 satellite channels. We landed on the airstrip yesterday and they asked us if we wanted them to call “The Taxi” – five minutes later (She must have been at the other end of the island) the golf cart arrived. It was a great way to end a long journey that commenced with a non-stop flight to LA. We just made the 2-hour connection, as the security etc was pretty tight.

Then our Mexicana flight to Cancun sat at the end of the runway for an hour, as they couldn’t get it started. Finally they towed us back to the terminal where someone re-booted the computer and we were off. This delay meant we were going to miss our bus at the other end, but somehow we got to the bus terminal one minute prior to departure (using a fantastic company called Cancun Transfers) and 6 hours later, desperately tired we arrived in Chetumal which was our first real view of Mexico (Mexican Holiday Inn’s are green too). Didn’t stay long as we had two more planes to catch, I practiced my Spanish on the taxi driver – it must have worked as he delivered us at Corozal Airstrip in plenty of time for the spectacular flight by Cessna to San Pedro then to here. The view was magnificent, flying over the clear blue water, with sandy Cayes spread out below us.

Anyway (I just took a break as a kid came in selling Banana Cake – yum looks nice!) today we really got to appreciate what makes this area so appealing. After getting up at six, jogging around the island then having a lazy 1-hour breakfast (really slow service…you goin’ nowhere man) we got out on the reef. Spent the morning snorkelling among some really big fish, the best part was swimming with the stingrays and sharks (Fins to the right, fins to the left – we were the only bait in town). Our guide grabbed a 5-foot shark then swam with it to Sheridan so she could get a close-up, we all then had a pat – he then did the same with a stingray. We just had to remember to keep clear of the ray’s mouth and the shark’s tail – or was it the other way round? Anyway I’m here now! We also swam over about a dozen 4-6ft sharks – it was pretty freaky but we looked cool in our floaties and didn’t shit ourselves too much.

Well I better go now as my wife Michelle has just come in which means it must be snapper time. Had a snapper sandwich for lunch and no doubt we will have snapper steaks. Impressed the waitress last night when I recited the whole menu back to her. (There are only so many ways you can eat snapper). Cool though, you get 2 free rum and cokes with every meal!

The next morning we chartered our own boat and driver and created our own tour. First we went searching for Manatee’s, which basically are seacows, and very rare, eventually we found some – huge, curious animals with big snouts! We then had our packed lunch on St Georges Caye, a tiny island only 15 minutes from the mainland. Rich Belizeans have their weekenders there – one family was eating Subway fresh from the packet – what a lifestyle! We then did some more snorkelling and watched Michelle swim with a shark for 10 minutes, when we told her she got back in the boat very quickly!! The next day we caught the water taxi to Belize City where we met up with the Funky van. While we were on the docks looking for the van, I got chatting to a weathered old bloke with one tooth wearing a “Bulldogs University” T-shirt, shame I didn’t have the camera handy! So eventually we caught up with Patrick, our tour leader, looks like an American basketballer, tall black and good looking. Amy, our other travelling companion is a young graphic designer from Anaheim who spent most of her youth sneaking into Disneyland on weekends – not sure if that was before or after the gothic phase – either way she’s cool and is blown away by most things Guatemalan! They love her too; she hasn’t got the hang of converting dollars and pays too much for everything! Laughs at my jokes and her and Sheridan are best buddies already – so we are a pretty good group!! Our first stop was the Belize Zoo, small compared to Melbourne Zoo but had some unusual animals and Sheridan enjoyed it!