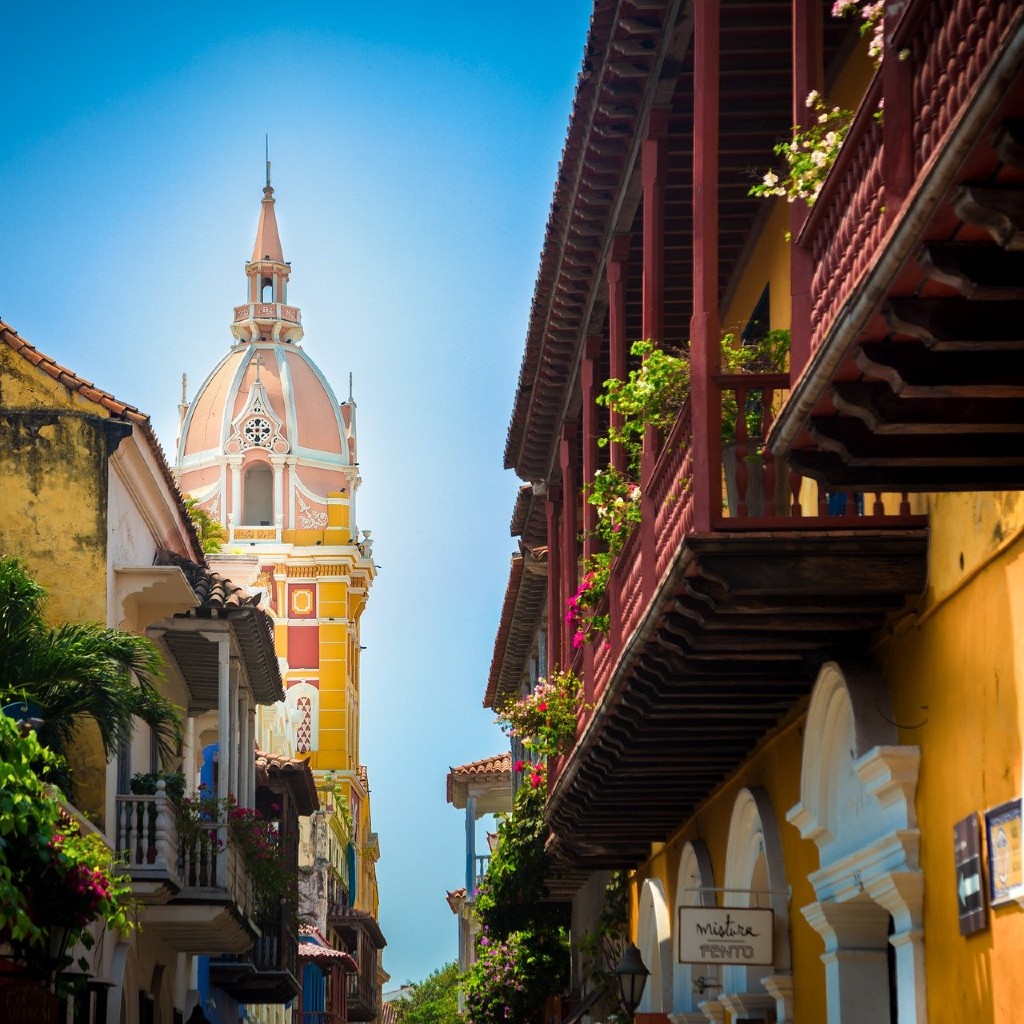 Welcome back to Colombia

The old city of Cartagena was built in the 1500’s, it is surrounded by a huge wall and most of the structures were built in the following 200 years.

My last day in Colombia, down to only 10 dollars, I turn around and wave goodbye to Colombia for the final time – hoping one day to return. Walking the 100 metres across no man’s land, a desolate patch with a small group of trees the only respite from the heat. Strung between them was a raggedy looking hammock, I remember thinking to myself “I wonder who that belongs to?” A few steps and I am into Venezuela my ultimate destination with my ticket home waiting at Maracaibo Airport. I hand my passport to the border guard with a smile, he takes one look, laughs and points back to Colombia!! Not understanding fully, I finally work out that he means that I am not welcome as Venezuela is an ally of Argentina who is at war with the country of my nationality – Great Britain. I reluctantly return to Colombia to be refused entry, being reminded of a little-known law that doesn’t allow a foreigner re-entry until 3 months after the last departure. After hours of back and forth, the border closes as it is now dark, so I retire to the grimy hammock I had spotted earlier in the day. Trying to sleep, being eaten alive by mozzies and jumping at every noise, I finally nod off to be woken by a Colombian border guard with a plate of rice, a fried fish and a beer! He explained that his boss may let me back in the next morning as long as I fly home that night. Eventually I am allowed back, and I am put on the first bus back to Barranquilla. On the outskirts of town, I notice a small girl, no more than 5, with frizzy blonde hair and huge brown eyes, sitting in a doorway, strumming a guitar and singing in a high pitched voice…I don’t know she had something about her I couldn’t place!! As the plane took off over the Caribbean I looked down at the aqua blue of the sea and knew that one day I would return to this amazing country.

Ok so that was exactly 25 years ago, it is my birthday today and the beer I had at the border all those years ago was my first “legal” drink! Circa 2007, we are staying in a hotel in the old town of Cartagena that costs over $100 a night, we just purchased some emerald jewellery, I have a decent career and here I am writing to you guys whilst listening Nova 100 with Hughesy and Kate on the Internet! Just need them to play Shakira and the picture is complete.

Sorry about the nostalgia, a close friend of mine sent me an email yesterday reminding me that is what birthday’s are about, to look back at what you have achieved, have some “me” time and then move forward again. It was actually in my final weeks in Colombia that I decided that I would become a Travel Agent!

We are loving Colombia, everything I remember about the place is still true. The old city of Cartagena was built in the 1500’s, it is surrounded by a huge wall and most of the structures were built in the following 200 years. There are amazing churches and palaces and museums, each one takes your breath away. Just standing on every corner there is a photo opportunity. It is the only Spanish city that despite 200 years of trying, Francis Drake, Henry Morgan and all the other pirates could never penetrate. Actually I did notice that Pirates del Caribe – Fin del Mundo opens soon so it seems that Johnny Depp has succeeded where many others have failed, then again with looks like his he’d be used to that! Speaking of looks, for 25 years Michelle believed that my ravings about the beauty of Colombian women was just leftover adolescent pangs that I never quite got over. Now both Sheridan and Michelle are my witnesses, everywhere you will find the most incredible looking women in all walks of life. The lady who sweeps the street would stop traffic in Toorak Road, the lottery ticket stall holder would wow them in Milan and the policewomen…well arrest me now!!

There are police on every corner, so you always feel quite secure and as it is a quiet time of the year there are not many tourists around and the police are happy to point out anything of interest. You only get hassled in the key tourist spots where they try to sell you wristbands, t-shirts, Shakira cd’s or paintings of fat women..makes you wonder who they got to model them? There is a famous Colombian sculpturer called Botero that is well know for making monuments of large rounded women, some of you may have seen “Big Bird” on Singapore River – well that is one of his too! Speaking of getting hassled, yesterday was a real laugh, well now that we are dry and on solid ground it is! Out of Cartagena there are two “must do” day trips, one is to a mini volcano full of mud that you sit in for an hour then get stripped and washed under water by a local woman before you go home. Sheridan and I were up for it but Michelle wasn’t keen on a mud bath so we opted for a leisurely cruise out to Islas Rosario instead.

Cruising out of the harbour in a tiny boat, grossly overloaded we headed for the islands for a day in the sun. Through the heads of Boca Chica, the new city on our starboard side was strung out like a poor mans Gold Coast or Miami. Into the open sea the waves were gentle as we powered toward the beautiful islands, small white sand beaches some with only one house on them, many of dubious architectural style and finally to the Oceanarium. Here we saw sharks being fed, one dolphin did a couple of tricks, there were a few turtles hanging around and some flamingos. Anyway Sheridan loved it and you couldn’t help but stare at the water, I mean how many shades of aqua are there?? Lunch was served on nearby Playa Blanca, a lovely long strip of sand with a few huts on it. A plate of rice with a whole fish was presented to each of us..Sheridan not daring to eat what was not long ago swimming under our boat, it’s face looking up at her with this half burnt charcoal smile. In the end, I decided that we should just feed it rice whilst Sheridan ate some salad.

After we ate it was time to be hassled Colombian style. A couple of large units started massaging me despite my protests, Sheridan had her hair beaded whilst Michelle stood guard over our gear surrounded by dozens of guys trying to sell her everything from shell wrist bands to coconut carvings. It was a good thing that nobody meant her any harm as I was rendered helpless my face pressed in the sand whilst the two women smeared a white concoction on me, occasionally a hand disappearing up my leg, too close to my …um – wallet for my liking – whilst Sheridan was trapped between a large set of breast as her “hairdresser” manipulated her hair with her dexterous hands into long platted strands. Sheridan reminisced about an experience in Belize three years earlier where a woman of similar proportions achieved the same result with her hair. Good thing we were only on the beach for two hours so there was only so many things they could sell us. Reminded by Michelle that my $20 massage was a complete rip off, I used a new strategy of striking up a conversation with one of the locals to kill time. Fernando Colon comes to the beach every day, it takes him 2 hours to walk in each direction, he is 28 and has a 5 year old daughter. He barracks for Aston Villa (Angel, a Colombian plays for them) and Real Cartagena who are not very successful. One day he wants to learn English and maybe see a kangaroo, I asked him if he was related to Chistobal Colon (Christopher Columbus) which he took as a great compliment! He doesn’t understand the rules of Australian football but now knows the “Bulldogs Western” are the team to follow. This is where my Spanish ran out, I bought two bracelets and the boat was leaving. I waved goodbye to Fernando and his friends and I could hear him practicing his first words of English “Goodaye Mayte” as we plowed into the surf.

The journey home was a nightmare!! Every day in Cartagena at around 4pm there comes a wind that takes the edge off the heat, the sort of wind that makes you smile, reminds you that you are alive – any wind lovers out there will get what I mean. Each day we have looked forward to it…except today. The little boat struggled for an hour, riding high at the front, climbing to the crest of each wave then crunch, slamming down sending a plume of water over us. We got completely drenched and had to shut our eyes every 20 seconds and shivered for the first time in months! Finally we somehow made it back to port, thanked the statue of Christ (I think it is him coz my glasses were fogged up so I just guessed) that guards the entrance to the harbour and dripped all the way through the cobbled streets back to our beautiful hotel.

Michelle and Sheridan have now awoken from their siesta, that same cooling breeze is coming through the window and I’m being reminded that I promised to go souvenir shopping! Hang on, aren’t I supposed to be getting the presents today. Well I guess not – nothing has changed in 25 years…I’m still in “no mans land” and yet somehow I’m still smiling!

Welcome back to Colombia!