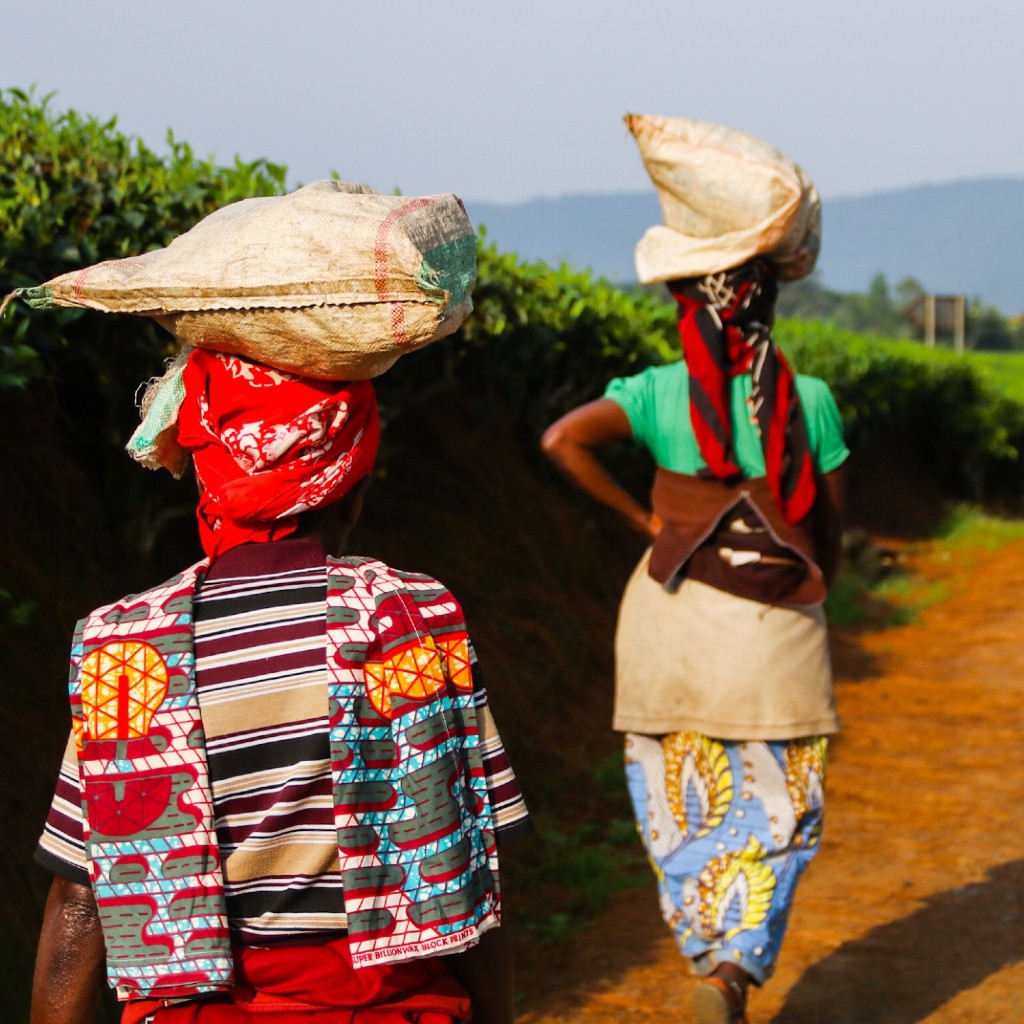 You will never forget your first encounter with a silverback, there is that initial fear, followed by a need to get closer, quickly replaced by the realisation that he is in complete control of the next few minutes of your life.

We roll out of Team Africa Rising Headquarters on our Scott Spark mountain bikes, narrowly avoiding a lady carrying firewood on her head. She is dressed in a vibrant umushanana, which consists of a long skirt with a sash across her shoulder, the striking orange and aqua blue contrasting against her rich brown weathered skin. We ride on through a bustling village, onto the open road, verdant tea plantations creep right up to the edges of the road and as it curves you feel that you are being engulfed in a sea of green. In the distance one of the five nearby volcanoes is struggling to appear through the smoky sky, a result of burning off in neighbouring Uganda.

Ahead of me is Adrien, a member of Team Rwanda, already a multiple national champion who competed in the London Olympics however, to the untrained eye, he looks the same as all the skinny young men you see just hanging around. Cycling is a big deal here, which is quite remarkable given that as recently as 2006 riders were competing on wooden bikes.

In 2007 Team Africa Rising was formed by Jonathan Boyer, a legendary American Tour de France rider with a colourful past. A deeply religious man, he sought redemption by moving to Rwanda with a vision to develop the sport in the struggling nation. Since then the team has morphed into a semi-professional outfit that has competed at the Olympics, World Championships and Grand Tours. The rise of the team is so remarkable that several years ago Hollywood came knocking, resulting in an award-winning documentary called Rising from Ashes (Think Cool Runnings or Eddie the Eagle). Last year the President, Paul Kagame, recognised the opportunity to promote his country in a positive light on the world stage and purchased 18 Pinarello road bikes for the team. When I toured their rustic headquarters, the quality of their equipment was the most unexpected element of the visit.

The majority of taxis in Rwanda are bicycles, you just need to look for the yellow, red and green stripe on the pannier rack, flag the rider down and off you go. He gets a great work out and you get a pollution free commute. The quality of roads in Rwanda is quite surprising and although every inch of the country is covered in hills, you can still get to the Uganda, Congo, Tanzania or Burundi border within 2 hours, from virtually anywhere, on smooth bitumen. There is not much traffic either, a few local buses, occasional trucks, tourist jeeps, virtually no motorbikes then suddenly a bunch in lycra that look like they should be on Beach Road swoosh past.

From the moment you cross the border into Rwanda it feels like you have stepped out of Africa. In physical terms, for sure, as you are confronted by rolling green hills that remind you of Switzerland. However, there is something else, the country is thinking ahead, playing the long game, considering the community, the environment and practicing responsible governance. We were delayed at the border for 2 hours, although frustrating, it was the result of searching visitors bags to ensure that illegal items in the form of plastic bags don’t enter the country. There is no rubbish to be seen and community pride is evident everywhere.

It could be a result of Umuganda Day, which occurs on the 4th Saturday of every month when communities come together to clean streets, dig ditches, build schools or assist their neighbours. Although this is now law, it is an ancient Rwandan tradition that was brought back when there was an overwhelming need to bring a country that had been destroyed by the Genocide back on its feet again. Umuganda means ‘coming together for a common purpose to achieve an outcome’.

Every individual in Rwanda is affected by the genocide and as a visitor you need a basic understanding of what occurred before you can fully embrace the country. It was one of the most horrific events of recent times and a visit to the Kigali Genocide Memorial is incredibly confronting, some of the stories and images will never leave me.

The Rwandan Genocide refers to a period of 100 days that started in April 1994. During that time nearly 1,000,000 Rwandans were slaughtered. The perpetrators were radical and militarised Hutu’s, the working class, who were brainwashed into turning on the Tutsi minority, who were essentially the middle class. Such was the frenzy that neighbours and friends turned on each other, ordinary people became mass murderers, the result being that the majority of Tutsi population and many moderate Hutu’s were wiped out.

Our hotel, Des Mille Collines became a sanctuary during the genocide when the manager Paul Rusesabagina saved the lives of over 1,000 refugees. Sitting on the pool deck of the 5-star hotel sipping on a cold Belgian style Virunga Lager with the lights of Kigali twinkling all around, it’s hard to imagine what it was like up here only 24 years ago.

But you have to allow your imagination to take you there, otherwise how else can we prevent this happening somewhere else in the world.

Just try and imagine attempting to rebuild a country where the concept of trust has completely disappeared, a country where every single household has been a victim of unspeakable crimes, a country where nobody wants a pet dog anymore as they can’t remove the image of hungry ownerless dogs roaming the streets gouging on corpses.

Paul Kagame is the rebel leader that stopped the genocide, he has been president since 2000 and with a 98% popularity rating it appears he will be president for life. Globally he is also well respected, recently being elected as the head of the African Union.

As soon as he became president he launched his 2020 vision “The Vision 2020 is a reflection of our aspiration and determination as Rwandans, to construct a united, democratic and inclusive Rwandan identity, after so many years of authoritarian and exclusivist dispensation. We aim, through this Vision, to transform our country into a middle-income nation in which Rwandans are healthier, educated and generally more prosperous. The Rwanda we seek is one that is united and competitive both regionally and globally” – Paul Kagame

Throughout the country there is evidence that his vision is working, he is supported by a parliament where over 60% of members are female and it seems that a focus on innovation is paving the way forward. The government prides itself on zero tolerance for corruption, this flows down through business and on to the individual. With the right paperwork you can set up a new business in a day, unheard of in most parts of the world. The population has become more health conscious as legislation determines that on a Friday afternoon, businesses must close so everyone can go out and exercise. Solar lights line the highways, once a month is a car free day, drones deliver blood and for the first time Rwanda has a food surplus. Yes, that’s correct, here is an African country with a food surplus. There are many innovations dotted throughout the country, one being the integrated fish and rabbit farms where the organic manure produced by rabbits enhances the natural pond food and improves the nutritional status of the fish.

Rwanda is known as the land of a thousand hills, the rich soil, altitude and temperate climate means that most things grow naturally which puts the country in a solid position given the strong movement around the world toward organic products. Tea plantations are everywhere; such is the scale that only 3% of the product is consumed locally. This is evident in trying to order a cup of tea at any hotel or restaurant, stop with the hot milk, like really?

Throughout Africa there are issues where wildlife intrude on villages, eat crops and put the human population in danger. Conversely, the domestic animals from the villages wander into the national parks and ruin the delicate ecosystem. Rwanda has found the ideal solution, observing that humans are the only animal that consume tea leaves. As a result of this discovery, bordering all the national parks are a thin wedge of tea plantations that provide a natural barrier and a wonderful aesthetic.

Rwanda has a diverse range of world class national parks. In the north we spent a night in a luxury tented camp at Akagera National Park, the variety of game as good as the more crowded parks in Kenya or Tanzania. Hippos bellowed into the night just meters away, a thin piece of canvas our only protection from the most dangerous animal in Africa.

In the south we spent a few days in the rainforest of Nyungwe National Park, Africa’s largest mountain rainforest, a remarkable pristine park where the Nile River starts as a tiny inconspicuous trickle on its 6,853km journey to the Mediterranean. We trekked for hours to find chimpanzees and enjoyed observing them in their natural habitat, to them we must have looked awfully clumsy in our gaiters, day packs and walking sticks. Above us they swung in the trees with abandon, occasionally dropping down to sprint through the thick forest that we had struggled through, despite the guides hacking a path for us with their machetes.

Primates are the primary reason visitors come to Rwanda, tourists come from all over the world, fly into Kigali get transferred straight up to Volcanoes National Park, where for US$1500 you can trek for a few hours to spend an hour with a family of mountain gorillas.

It sounds like a lot of money, but this ensures that protecting the gorillas is more valuable than poaching them. As part of the fee we each donated a goat to a local village where until recent times their only source of income was from poaching.

You will never forget your first encounter with a silverback, there is that initial fear, followed by a need to get closer, quickly replaced by the realisation that he is in complete control of the next few minutes of your life, followed by a guarded mutual respect. Although we didn’t get within touching distance of the mountain gorilla family, just being in their presence was an emotional experience. It was one of those rare moments where taking a photo became an afterthought. Ok, the hour is up, quick get a photo.

Two hours of mountain biking with a world class rider is a humbling experience and exhausting just trying to keep up, so by the end I was feeling very wobbly and slightly delirious. Getting wiped out by a jeep full of American tourists in their pressed khaki, having ticked off the Gorillas, on their way to the airport for their connection to Houston would not have been a great way to end the ride.

Sweating heavily and feeling unsteady on my feet, I look up as the waiter hands me a fresh ginger and honey tea. I’m suffering from tonsillitis and bronchitis, am struggling to breathe and still distraught that today was the day I was supposed to be riding out with Team Rwanda. Instead I’m laying here making up stories, wondering what might have been.

He turns to me and says “Come on we need to get you well, you are going home tomorrow.”

As we drive to the airport I take one last look at the lights of Kigali, turn to my wife and daughter and say. “How good is it to be among people that after so much hurt and suffering, put it behind them and come together for a common purpose to achieve an outcome”

I could live here.