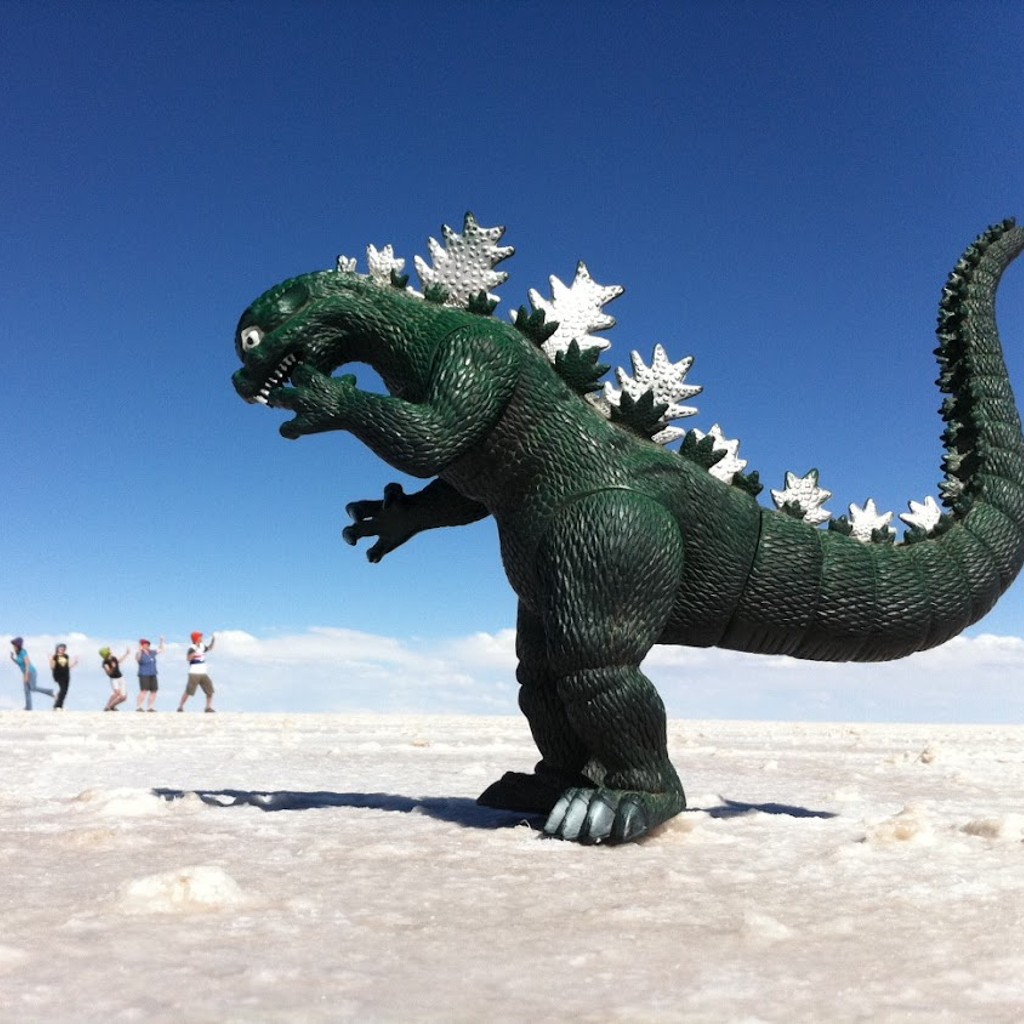 Tuning out of Bolivia

There was a valley where the rock formations are said to have inspired Salvador Dali, and contrasting coloured lakes side by side – each one hosting a different rare and valuable mineral.

All around us in every direction it is blinding white as far as the eye can see, not quite snow white but the sort of white you might paint a room and then declare it trendy. Way off in the distance there appears to be an island floating in mid-air, silhouetted against the deep blue sky. I quietly walk away from our group and strike out for the horizon; looking back they don’t appear to be any further way – just smaller.

I choose a relatively smooth piece of ground and sit down with my legs crossed; the crusty surface crackles beneath my weight. This is the moment I have been looking forward to since we crossed into Bolivia from Peru several weeks ago. I retrieve the iPhone, select my favourite song and personalise my Salar de Uyuni experience by tuning into a live version of Mana’s Vivir Sin Aire – ah yes, the kings of Mexican rock music at their best!!

Salar de Uyuni is one of the most incredible sights I have ever seen, and to have come so far to experience one of the most remote places on earth, surrounded by nothing, is quite eerie. A sacred place for Bolivian’s, the world’s largest salt flat (12,106 sq km) sits at 3653 metres above sea level and both access and environmental impact are carefully controlled.

Off in the distance I spot an attractive young couple wearing striped hippy pants. They are facing each other eyes closed, each with the ubiquitous white plugs in their ears. I quietly chuckle to myself as I imagine that they are French and bopping to Plastic Bertrand. After a few minutes of solitude, they notice me and my fancy camera and, figuring that I know what I’m doing, come over and ask me to take some shots. They had strong German accents (oops!) and for the next ten minutes I directed them until we capture the perfect shot they were after. The result was extraordinary – the man spitting out a miniature version of his gorgeous girlfriend!! I’m sure there’s a story there?

From all over the world, tourists flock here to take advantage of the exceptional light and limitless horizon to create amazing photos. Our family got into the spirit and had a bit of fun, producing a video of us being attacked by a six inch dinosaur. Archie, our tour guide went to amazing lengths to take one particular photo. He lay chest down on the sharp crunchy salt, camera in hand directing us as best he could, “Ten steps back, two to the right”, “Not you, her”, “No your right, not my right” and on it went.

By the time we got the money shot we were all feeling dehydrated and a bit cranky. My daughter Sheridan made the process even more difficult as she was plugged into Katy Perry, away with the fairies, no doubt living her own Teenage Dream. The final result had us each striking a different pose, balancing on a row of colourful felt hats that we’d found in the La Paz markets. Sheridan, posed on the blue hat, is probably imagining that she has matching blue hair, while the rest of us just did our upmost to appear interested.

Although Salar de Uyuni is a long way from everywhere, it’s right in the middle of the gringo trail. Most travellers hang at out at Uyuni, a stark town built in the middle of the windswept desert. Not a tree in sight, it feels like a long discarded western film set except the tumbleweeds have been replaced by rubbish – an unfortunate by-product of a town that depends on mining and adventure tourism for survival. Uyuni is a former railhead, and just out of town is a train graveyard lined with rows and rows of decommissioned steam trains – the rusty brown and orange tones contrasting with the pale desert and richness of the sky. In the centre of town is a single street that is somewhat in denial of its stark surroundings. With its wall to wall pizza joints, tour offices, trees, rotunda and wafting aroma of freshly brewed coffee Avenida Acre is a sure fire magnet for backpackers.

It always amazes me that wherever you go in the world, you find the same backpackers. There’s a confident Dutch couple, a group of loud Aussies, three blond tanned German girls and countless fit looking Israeli guys – one with a guitar. They generally wear baggy striped pants, a loose t-shirt with an inappropriate slogan and headwear recently purchased at a local market for a bargain. They eat pizza, drink the local beer, sit in circles and listen to music that has the same reggae beat. Somewhere along the line they appear to have forgotten that the real reason they hit the road in the first place was to find independence and search for their own identity.

There is good reason to congregate here – you need the numbers to fill a 4WD tour operated by one of the dozens of companies in town. As soon as a vehicle fills up and the gear is loaded on the roof, they go off on the standard 4 day / 3 night Uyuni tour. It’s an incredible circuit that takes you out into a high altitude mountainous desert wilderness unlike anywhere else on earth. Conditions can be harsh on both the travellers and the vehicles. Several times we passed land cruisers jacked up awaiting repair, or vehicles stopped and the occupants spread out across the desert, possibly relieving themselves of the contents of a recent meal.

We were either very lucky or the research I did before leaving home paid dividends. Our vehicle was in excellent condition, Rueben our driver skilful and patient, and Archie our guide a perfectionist. The clues were there early given his demanding precision during the photo shoot, meticulous food preparation and Swiss style time keeping. The only negative was his taste in music. It started out ok with some familiar Kylie, but then spiralled from bad to worse as Cher then Air Supply got a run. On the second day, I stared across a spectacular green lake to the strains of Careless Whisper and remembered that Wham had already ruined one otherwise pleasant summer in England many years ago. So we had a choice – have our view of the next three days tarnished by George Michael’s confusion or obsession with himself, or make a stand and paint our own picture. One by one we all donned various shapes of the travellers’ greatest asset, the iPod. Forget imodium, diamox etc – nano was the number one item in our first aid kit.

And what a masterpiece it was, a veritable moving feast of out of this world scenery. One minute you were driving through a giant cavernous bowl of loose rubble, and then would emerge onto a vast plain surrounded by perfectly shaped volcanoes, each one soaring to around 6000 metres. There was a valley where the rock formations are said to have inspired Salvador Dali, and contrasting coloured lakes side by side – each one hosting a different rare and valuable mineral.

On the final day, just outside Tupiza, we stood in awe at the hundreds of towering fins of rock that formed the incredible Quebrada de Palala mountain range, and wondered why they weren’t listed as one of the wonders of the world. We learned that if we were to return in winter it would be at least 30 degrees below zero, but there would not be a flake of snow in sight- in the high altitude desert it only snows in the summer, and then only at night!

Occasionally we came across herds of llamas or lakes inhabited by bright pink flamingos. On one occasion I incurred the wrath of our group after crawling in close on my belly to get that perfect shot of the birds strutting in the safety of the shallows. Proud that I had succeeded without the birds taking flight, I failed to notice I was covered in bird crap from head to toe – but was soon made aware.

Other than flamingos and llamas there’s not much wildlife in the desert. We didn’t see any scorpions, unless you count the veteran German heavy rock band that is an obsession in this part of the world. They have had more hits in Bolivia than the country has had presidents, and that’s saying something! Even Archie, renowned for his more delicate tastes, was consumed by the obsession. I must admit there was a rare moment when their music matched the landscape. A Moment in a Million Years captured one spectacular sunset.

Just when you were bored with a particular terrain, there would be a surprise around the next corner. Archie filled our minds with stories of the legend of Butch and Sundance who eventually met their keeper only a few miles off our path. So when we came across an abandoned ruined town with just a partial steeple remaining I felt like we had stepped back in time.

Keen to absorb the incredible atmosphere, I eagerly jumped out of the 4WD, however, in my haste, I had forgotten to turn off my iPod. It was playing White Rose, a haunting country song about an abandoned petrol station in Texas. I smiled to myself – for the first time on this trip the iPods’ shuffle technology had synchronised with its environment.

As each person stepped out of the vehicle I asked them what song they had just paused on. Our guide, as expected, was All Out of Love, my wife Michelle had Robbie Williams Angels playing, Sheridan had Today Was a Fairytale by Taylor Swift, while the others were sharing some grungy John Butler Trio tune. Not a bad effort but not good enough, so we all agreed that for the next hour the whole vehicle would listen to Jamiroquai on repeat, I know this corner of the earth, I’m sure it smiles at me.