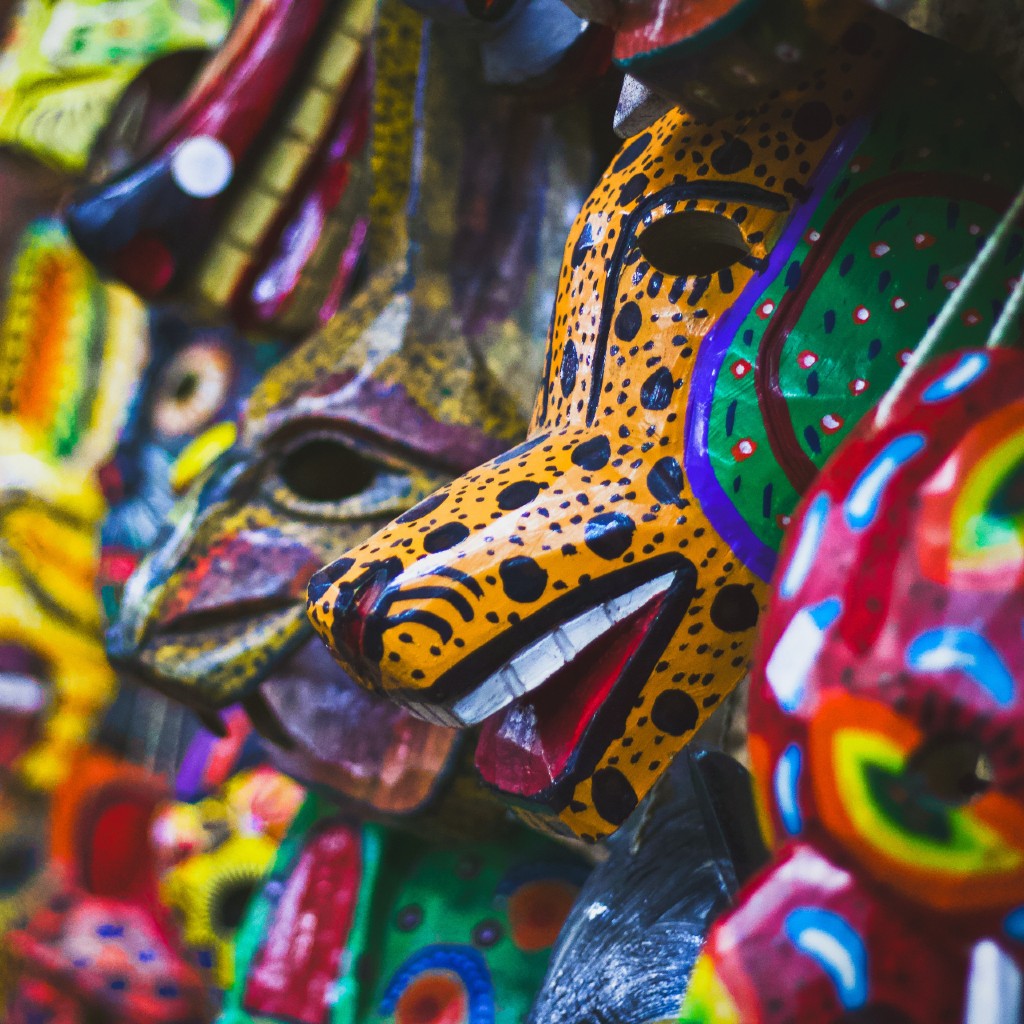 This village was tiny, had no tourists and were busy celebrating Easter in their own way, the church was adorned with pink flags and they were busy drawing intricate designs down the main street with coloured sawdust and seeds.

Crossing the border into Guatemala, the standard of living, already low, dropped even lower. This is one very poor country, but everyone seems quite happy with their lot and there doesn’t appear to be much crime or any tension of sorts. Maybe after 36 years of civil war, they are enjoying peace! Our first night was spent on the shores of Lake Peten Itza in a village called El Remate, the standard of hotel was OK, we had hot water and the rooms were clean. Next morning, I went for a run along the lakeshore at dawn, watching all the villagers washing their clothes on the rocks. Had to give up running though cause I got the attention of the mangy dogs from all around. Ok, now the reason we are here is that the magnificent Mayan ruins of Tikal are just down the road. This Mayan city was built between 700BC and 200BC and covers a large area of jungle. With our very knowledgeable guide we covered over 7km and learnt how to survive in the jungle! We climbed three of the temples up very steep steps, the last one you had to climb the equivalent of 20 household ladders one on top of the other – the others watched as Trev and I slowly made our way to the top, too scared to look back. The view from the top was incredible as you could look across the top of the jungle to the three other temples sticking up through the trees. Tikal was pretty amazing and if you were into old rocks, you could spend a few days here.

Guatemala on Good Friday, what a great place to be! Currently we are in Panajachel, a bit of a hippy hangout from the 70’s – it feels like Kuta without the glamour pattens1and absolutely packed with Guatemalans on Easter break. Pana sits on a huge lake surrounded by three volcanoes and dotted with villages; there is a main street that is closed to traffic and over a mile long. Teenagers are everywhere walking around drinking out of flagons of Gallo beer.

Just out the front here there are heaps of young guys on the balcony scoring all the girls that walk past. Last night we could hear the parties going all through the night, despite this or maybe because of it, the atmosphere is amazing – you don’t feel threatened in any way, everyone is here just to have a good time.

Today we caught a ferry to a nearby village called Santiago Atitlan, which was packed with tourists, and the whole place was a giant market. After 5 minutes I was over it, seen one market you have seen them all – we could have been in Vietnam, Thailand wherever! We then went on a tiny boat with a big outboard to another village called San Antonio, it was very funny as it was fast, bumpy and we all got soaked! Didn’t matter though as it has been very hot everyday! This village was tiny, had no tourists and were busy celebrating Easter in their own way, the church was adorned with pink flags and they were busy drawing intricate designs down the main street with coloured sawdust and seeds. Here we bought a few blankets and embroideries, as we didn’t feel pressured – every village has its own design and colour, most of the stuff here is blue and purple. This village was built up a steep slope and had great views down to the lake, had a hairy ride in the back of a ute into town. Couldn’t wipe the smile off Sheridan’s face as she held on for dear life as her braids were swept back in the wind! Did I mention that she was wearing the local costume at the time – OK so we are suckers and she is now stuck with a Guatemalan village girl outfit for her next fancy dress party! She also can’t believe that she is the same height as most of the mountain people here!

So then it was off to Flores, about an hour away back on the lake. This is a cool town that was also originally a Mayan city, but unlike Tikal, which was discovered in the 1800’s, this joint was wrecked by the Spanish who didn’t appreciate Paganism and liked to roam this part of the world erecting churches on any bit of solid ground. (OK, so I should have more respect on Good Friday – then what about the bloke passed out on the footpath nearby with the Jesus Christ tattoo?) Flores is on an island, connected by a causeway to the shore, it is only about a couple of hundred yards wide and packed tight with old buildings painted in bright colours. Spent an hour early one morning exploring the town’s cobbled streets before anyone was awake, it was magical – got some great shots too!

The next day was a long day driving right across Guatemala up into the highlands. The highlights were a swim in some hot waterfalls near Rio Dulce, there was one bit where you swim through a cave about three feet high and wide, you then drop into a pool of cold water, after climbing up a slippery slope you then emerge out of a hole under the full force of the hot waterfall – pretty scary but saved having a shower later!!

The other highlight of the day was our trip to a Guatemala City McDonald’s – Nikki was rapt! Imagine seven gringos in this big white bus ordering thru the drive thru. Patrick nearly got into a huge fight over Sheridan’s orange juice. It was the funniest sight – we just kept screaming out our requests and Patrick translated to Spanish. We missed out on a few drinks, but were all most impressed. OK, it’s Karsten again, Michelle just pushed me aside so she could write about McDonalds – me I’m quietly ashamed that my only view of a country’s capital city was whilst balancing a McMayaburger and a large coke on my lap!

Our destination after a long day on the road was Antigua, often described as one of the prettiest towns in all of the Americas – whoever wrote that hasn’t been to Springfield Missouri……just joking! Antigua is a colonial town with cobbled streets that date back to the 15th century, it was completely flattened by an earthquake in 1773 and parts of the town have been left exactly as they were after the quake. In 1979 it was declared a world heritage site. Our beautiful hotel was right in the heart of a parade of about 20 floats decorated with various activities that Jesus was involved it – mainly he was looking pretty angry as he was hanging on a cross! There were thousands of pilgrims in town, boys were dressed in purple as wise men, girls – well they wore crop tops and hipster jeans as they do the world over but that was OK, I could handle that! A brass band was playing and you literally had to join a conga line to move more than two feet – it was a great party and we scoffed ourselves with local delicacies of fried bananas and Churascos! Next morning we explored the town and saw some great old churches and reeled off a whole roll of photos of cobbled streets, doorways, archways and the mosaics that were being made in the streets with seeds, sawdust, branches, flowers etc. We were supposed to climb the volcano, which would have taken up the day but instead drove up to a village called Chichicastenango which was way up in the mountains and world famous for its market. You know my views on markets, I’d rather have looked down the mouth of an active volcano – doesn’t matter we will climb one some day, somewhere!

Well we are now ready to leave Guatemala and get back into Mexico – really looking forward to Chiapas State, which is a wild region with some thick jungle, Mayan ruins and a belief that possibly they shouldn’t be part of Mexico! We will soon find out if the rebels are waiting till Easter Sunday to declare their intentions!

Meanwhile Michelle, Sheridan and I are feeling slightly rebellious ourselves and getting into the party spirit! Dressed to the nines in our hipster jeans and singlets and donning brand new temporary tattoos we are ready to hit the street, which is rocking to the beat of Mana, Enrique, Paulina and Thalia!