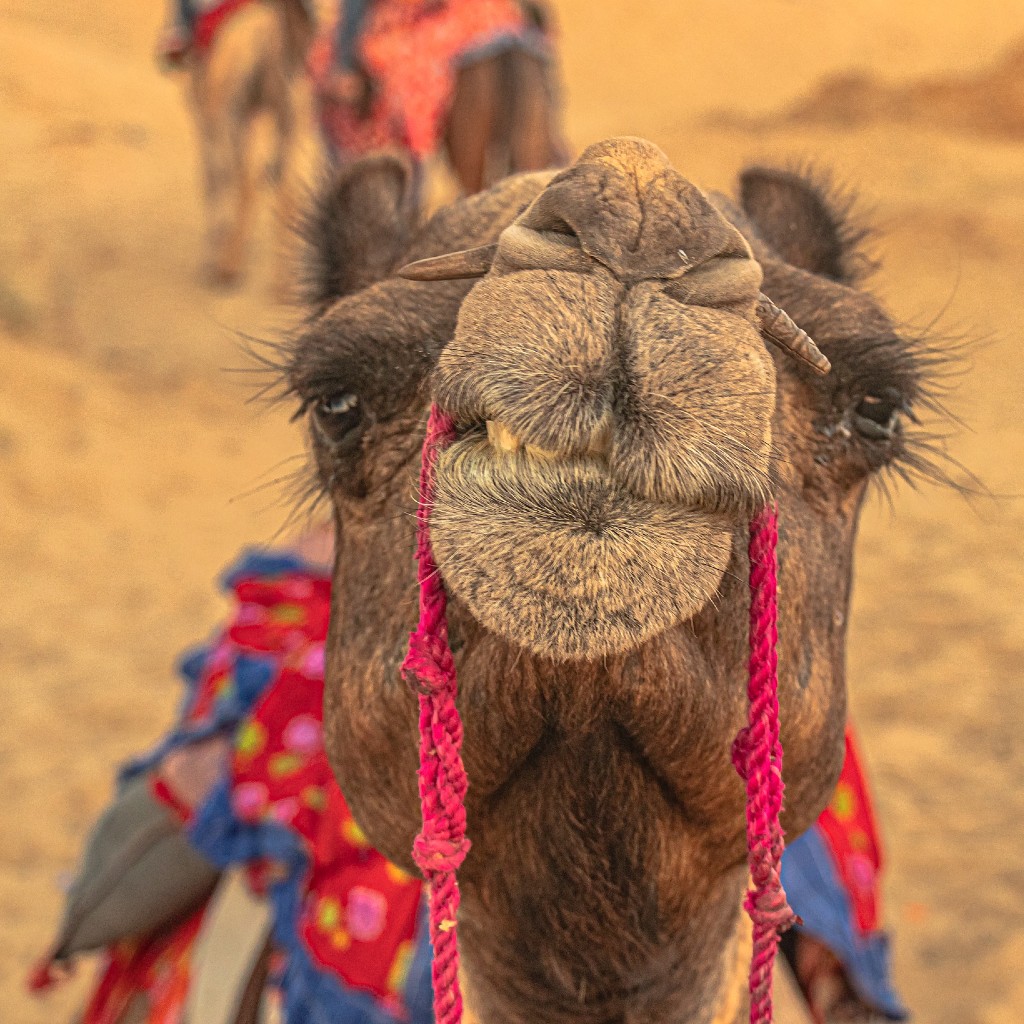 There are many options here for being hassled, the young mothers follow you wanting food and there are holy men everywhere. I discovered yesterday that getting duped once is the most effective way to avoid them.

Just stepped off a camel and still looking for my Jatz crackers – oh well I’m sure they will come back soon! Yesterday we rode out into the desert in a long line, down the main street of Pushkar. It sure looked a lot better from 8 feet in the air; my 8-year-old daughter – Sheridan loved it, waving down at the kids as she hung on for dear life. After a couple of hours, we were right out in the middle of the Rajasthan desert – ok so it wasn’t quite the Sahara, in spite of the powerlines and the irrigation channels we did feel like true adventurers. The evening was spent singing songs with the camel boys around the open fire; they were certainly more tuneful than us. Sleeping was fun, all of us slept on the sand, fully dressed and covered in heavy quilts which were certainly needed as it gets really cold in the desert. This morning a few couldn’t quite hack the riding, so they walked the 6km back to town.

Pushkar is a bit of a tourist mecca, a pretty place with a lake surrounded by a few temples, apparently the second most holy place in India for Hindus. It is very much like many other “in” hippy towns around the world. Lots of westerners are dressed in local garb, looking grubby whilst getting “in touch” with themselves. It could be Bali, Thailand, Guatemala etc.. Anyway, there is plenty of shopping and it is so cheap, I’m sitting here wearing a $3 pashmina I bought, a really nice lilac, which I’m sure, is my colour. Michelle and Sheridan are running around buying silver jewellery whilst avoiding being hassled too much. There are many options here for being hassled, the young mothers follow you wanting food and there are holy men everywhere. I discovered yesterday that getting duped once is the most effective way to avoid them.

Basically you get taken down to the lake shore, throw a flower blessing into the lake whist chanting the name of every member of the Indian cricket team, once done he blesses your family. The smaller the better coz you pay for every member. Once done you get a bit of string known as a “Pushkar Passport”. From then on you flash it at a holy man and he no longer hassles you. Good investment as there are more holy men than you can poke a sick at. Not that you would of course, religion is a serious business in this town! Leave the sticks for the cows who just love to get in your and everyone else’s way – I got head butted by a calf earlier and the whole street burst out laughing!

Cows rule India, they all look pretty healthy and they own the road, the footpath, the gardens and basically every foot of space they can take over. By now Michelle and Sheridan are back at the hotel pool, I think that’s one spot that cows don’t hang out. Unless you are thinking Israeli tourists…but that’s another story altogether!

Well about time I recapped the story, seeing we have been in India for nearly two weeks, I might start at Mumbai Airport. Thanks for the phone call Ranni. “Are you busy now?” No I was just fighting with 999 people who were trying to get through security whist the final boarding call was being made. I took one look at the queue and calculated that we would still be here after the flight took off so we barged to the front and all stood in the female line. I then jumped the barrier, went up to a security guard and asked him to pat me down. We then ran down to the aircraft and jumped on. Sheridan with both feet declaring; “Welcome to India, you are the 1st team to arrive” We were lucky to be on board as most flights to Delhi had been cancelled due to fog and one of the families we were due to meet up with were stuck there for 9 hours.

Arriving at Delhi Airport is like running into an avalanche, there are hundreds of touts and guides holding up names on bits of paper. We couldn’t find ours but you have to love mobiles, a quick call and we soon found him. In the meantime we were standing around shivering in our ski jackets. When we got to the hotel we saw a live news report from the airport where the reporter described the scene as “The passengers are chilly cold and running from pillar to post not knowing what is going on.” You have got to love Indian TV, there are about 90 channels, and many in English and Bollywood movies are on constant rotation. Local MTV is really cheesy and has 100% local content.

The hotel in Delhi was called “Hotel Good Times”, I really don’t know if it had ever seen better times…probably not? It did provide room service and the menu declared; “Every order takes 15-20 minutes in preparation – for any delay in service contact 911”. Another room service menu later in the trip declared “No service in the room”….what the?

Delhi looks like a giant earthquake, but we are going back in a couple of days so maybe I’ll have more to say about it then…or possibly not?

Anyway we eventually met up with the rest of the Intrepid group, a couple of families, a bit older than us and Nitin our tour leader. He’s pretty cool, smart, knowledgeable, cheeky, great with kids and a fun person to be around. Not keen on shopping either with is a real bonus! Our first real taste of India was the train to Agra, 2nd class was bearable, but anything was an escape from the chaos of the platform. Arriving in Agra, the beggars that surrounded us were very confronting, many with limbs missing, they touched your arms and legs. One that really touched our hearts was a kid with elephant size feet.

Our hotel in Agra, like many for the rest of the tour was a pretty high standard, marble floors, large bathroom and a swimming pool.

Agra has three amazing sights worth visiting, Akbars Tomb, The Red Fort and of course the Taj Mahal. The highlight was Akbars Tomb as it was there that Sheridan was “discovered” by several groups of school children from a remote district of central India. They all took turns in getting photos with her, loving her blue eyes and pale skin. In the meantime I was taking endless photos of the beautiful kids, some who were dressed in bright coloured saris others were dressed in the best outfit they could must for the excursion. We almost all forgot about the reason we were there. Agra’s Red Fort was probably the most impressive building we saw in Agra, endless palaces covering a massive area. Finally there was the Taj Mahal, impressive yes, no doubt but a bit of a let down as it left no surprises, it is so well documented and photographed that you are left searching for more. I’m not sure if the 100,000 or so people crawling all over it added or detracted from it. Anyway, Sheridan took away a “Pure marble” miniature model for $3 and I managed my usual crass “Stand in front of famous monument, don the Bulldogs guernsey and and jump” photo so we were both content.

So far our stomachs had held up ok, basically we ate “Thali” every day. Some rice, dahl, curried veges, roti and what looked like spinach soup.

Now it was time to get out of the city and get in touch with some Indian wildlife. A couple of hours of a suicide taxi ride, dodging ox carts, tractors, trucks, cow and families of five on motor bike got us to Bharatpur. Apparently this is one of the most important bird parks in the world, look the birds were pretty cool but seen a couple of cranes and a few deer and it starts to get boring. We did notice a few Poms with their cords tucked into their socks looking very excited but each to their own and anyway were going to see some tigers tomorrow!

Ranthambhore National Park is the best place in the world to see tigers. Getting up at 4.30 we headed into the park in open top jeeps, freezing our buts off but ready to see the kings of the jungle. Sheridan and I had names ready for each of them, Arnold, Huddo, Leon – even Richo for when we saw a big dopey one. Five hours, sore butts, our bones still rattling from the rough tracks and all we could claim was a few pad marks where Richo had been two minutes earlier. We then came across a truck full of Indian school kids that had seen a mother and three cubs! We felt ripped off but you sure couldn’t wipe the smiles off their faces!

Anyway we were compensated by two days in the beautiful old town of Bundi with lots of narrow streets. Way off the tourist route, we weren’t hassled, you could wander through the market – pay local prices and everybody would smile and say “Namaste” without you thinking they were going to hassle you. On the hill above Bundi was a giant run down fort and as we were staying with a distant relative of the Maharajah we were let into some locked up areas. Every visit to every palace we are told some great stories but all I remember is that they were built from about 1500 onwards and every religion is usually represented in the same building which is unusual anywhere in the world. We had dinner on the roof of the palace looking out over the town.

Between most of these towns we travelled on a minibus, our driver declaring that he was king of the road several times by refusing to budge out of the way as overladen trucks were forced to the side. Sometimes a stand off would last for several minutes, as neither driver would budge. A long discussion would ensue as to the value of wheat over humans. Our tour leader told us of a time that he was stuck like that for eight hours once!

New Years Eve was spent in a Maharajas Palace in the village of Bijaipur. It was quite impressive, surrounded by a high wall; dozens of rooms but spoilt somewhat by a dozen English tourists. The Maharajah himself drove us out into the countryside, every second person saluted as they saw him drive past. It was only then that I realized he was the boss man…good thing I didn’t tip him! In one of the villages I came across this lady in a bright yellow sari who was hard at work in the courtyard of her house. I asked her if I could take a photo, she was happy to oblige but couldn’t work out why I wanted to photograph her? Imagine being that beautiful and not realising it!