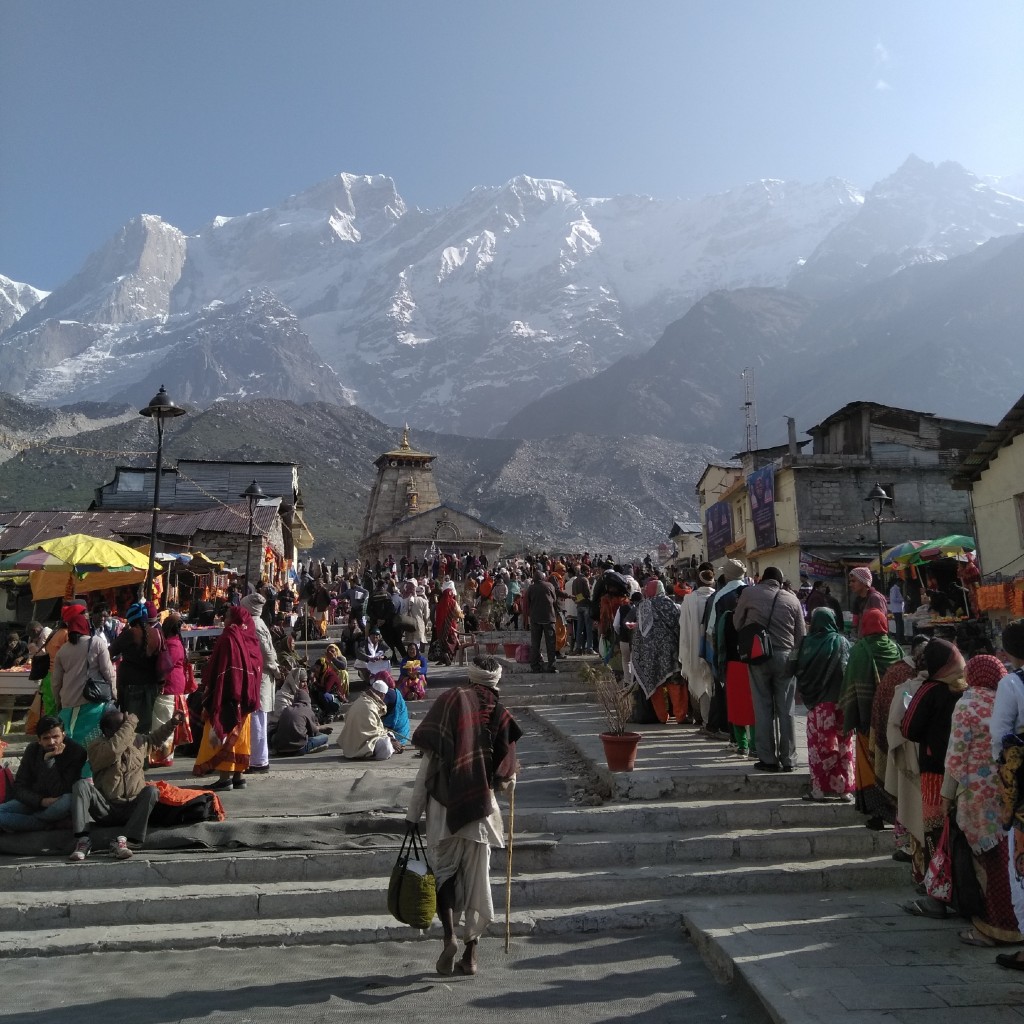 On top of the World – Poetry in motion

Showing off slightly, my final run took me past an impressed Carlos at some speed and as I reached the Indian Army I ground to a clean and even stop waving my stocks at the smiling and clapping troops.

Picture this….
Magnificent blue sky, an amazing view across the world’s highest mountain range. I feel I can reach out and touch the dramatic snow capped peaks of Nanda Devi (7816m), Kemet (7756m) and Dunga Giri (7066m). Just to my right is a regiment of the Indian Army Border Patrol in identical jungle green garb all standing in a perfect line, patiently listening to their ski instructor. Just below me is the only other skier on the mountain, Carlos from Goa – at 46 years of age he is attempting to ski for the first time, actually he tells me that before today he had never even seen snow! One last look down the slope, I push off, a nice smooth turn to the left a slide to the right, a smooth straight run and a quick skid as I reach the end of the snowline. I unclip my skis, hand them to Sanjay my porter and we slowly climb the 100 metres back up to the top of the run! Welcome to skiing Indian Style at Auli – India’s premier ski resort!
Auli is situated in the Gharwal Himalayas about 500km north east of Delhi and only a few kilometres from India’s border with Tibet. Auli is the world’s highest winter resort at 4,000 metres, yet despite the altitude and recent snow down to 1,000 metres in nearby Kashmir the region hasn’t had a decent fall since before Christmas. The authorities have decided to close the lifts until the snow improves.
There are only two places to stay in Auli, a government guesthouse at the base of one of two lifts or The Cliff Top Resort, which is about halfway up the slope. Like most buildings in India, The Cliff Top Resort looks like it is either still under construction or is mid way through being demolished. Either way, the efforts and number of staff on hand make up for the lack of aesthetics.

We counted at least forty for the half a dozen or so guests, at some stage I’d say we met every one of them. When the TV flickered out, an electrician was on hand, when you needed hot water a boy with a bucket would appear, when the power died a candle boy appeared and somewhere between turn down and nightfall the “hot bottle” boys would tuck hot water bottles into the foot of your bed. Without this added luxury we would be in for some very cold nights as the insulation was virtually non-existent and the heating could drop out at anytime.

As in most world-class ski resorts, Auli has a full range of equipment for hire. You can choose between a dozen pairs of skis and one snowboard! I had come to Auli to snowboard but nobody could work out how to use it – a set of bindings might have been a good place to start! Anyway, undeterred I settled on a pair of Kastle skis identical to the set I put out on my nature strip over a decade ago. Luckily I had a jacket to go with the red Honda motorcycle pants that the instructor rented me for 50 rupees.

To even get to the base of the run we had to walk a kilometre up the slope and as a result my heart is racing and my head is pounding from the exertion. I have been drinking lots of bottled water and taking Ginkgo Biloba tablets but surely at this stage shouldn’t I be sitting in a chair going up the slope? Anyway I came all this way to ski and there is nothing going to stop me. Sanjay hands me my skis but before commencing my second and final run I wait for half the Indian army to attempt their first run. All I can say is that if China ever invades from the north in the winter then India is in a lot of trouble. Carlos meanwhile was getting personal tuition from Ashok his porter/ski instructor. In teaching Carlos to snow plough, Ashok would kneel in front of the skis holding the tips together with one hand whilst crawling backwards as fast as he could. Invariably this would last for about 3 meters and would end with Carlos straddling Ashok who would be flat on his face in the mud/snow. Ashok unperturbed was determined that his man was going to ski and the process kept repeating itself all the way down the slope.

Before stepping into my skis, I take in the dramatic view down the valley to the town of Joshimath 1200 metres below and remember the journey we had undertaken to arrive at this magnificent place.

It started outside The Hotel Goodtimes in Delhi, one of the thousands of inappropriately named hotels throughout India, where we were met by our guide Madan from ‘Indian Moments’ and handed an introduction letter with our vouchers.

The opportune day for us comes today when we share with you our experiences and understanding about India. In this journey of yours, our entire team will work in the best way you can be assisted and guided. We wish you all the very best in your efforts to unravel the Enigma spelled India!

Day one involved a six hour, 230km drive through mostly flat country on typical Indian roads which generally means a piece of asphalt about 3 metres wide. Competing for this thin black strip would be ox carts, motor scooters (with a family of five on board), overladen trucks, jeeps, buses, tractors and auto-rickshaws. Our destination was Rishikesh, the place where the Beatles hung out in the 60’s and wrote songs for ‘The White Album’. Rishikesh consists mostly of Ashrams, Monasteries and Yoga schools – many westerners can be seen wandering around in robes relaxing, meditating or just simply trying to find themselves. Despite being the self proclaimed ‘Yoga capital of the world’ Rishikesh could also be described as the adventure capital of India, as it is here that the sacred Ganges emerges from the mighty Himalaya and the result is impressive with some fantastic rapids, beautiful beaches, thick jungle and turquoise blue water laying the foundation. Many adventure companies are based just out of town offering white-water rafting, kayaking and trekking – we stayed at the world class Glasshouse on the Ganges resort.

The second day involved an eight and a half hour, 253km drive ~ that translates to an average of 30km per hour. This should give you some idea of the terrain and condition of the roads. All day we climbed and climbed up a thin road that snaked along ridges, hung on to cliff faces and crossed dozens of rickety bridges. For several kilometers the road would turn to gravel then just as you thought it couldn’t get any worse the road became no better than a four-wheel drive track. Passing other vehicles often meant reversing several hundred metres until a suitable width in the road was found. The further north we drove, the more remote the villages, even the peoples faces started to change looking more and more Tibetan or Nepalese. Many times inches from the edge peering down a 1000 meter cliff I considered that my life was nearing its end and I started making plans and thinking about my friends back home. In the end the iPod was my only salvation, declaring that the Himalayas would make a great film clip for a Country music song. My wife and daughter kept themselves sane by writing down the words of some great Indian poet who had been conscripted by the Border Roads Board as their chief sign writer. His work was everywhere, painted carefully and placed strategically on the tightest corners and steepest inclines. I am pleased to be able to share some of his work with you now, I like to call it “Poetry in motion”:-

Time is money, but life is precious

Eager to last then why fast

No worry when no hurry

Do not gossip let him drive

Be soft on curves

On the bend go slow my friend

This is not a rally or race drive with grace

If you are married divorce speed

No race no rally enjoy the beauty of valley

Finally the combination of laughing, praying, the prospect of 2 metres of powder snow and a very good driver got us through to Joshimath at the base of the ski resort. Here the 4 km ropeway cable car was waiting to take us to Auli. Strict safety measures were in place, the driver going through a long checklist prior to departure. For the first time that day I felt safe when reading the back of the ticket:- “If the system fails completely, escape route from the cabin has been given from where the passengers can descend by rope”

Showing off slightly, my final run took me past an impressed Carlos at some speed and as I reached the Indian Army I ground to a clean and even stop waving my stocks at the smiling and clapping troops. Just for a moment I was the best skier in the world and all the fears I had for the long drive back to Delhi were gone.

In the words of the great Indian poet in the hills, “Life is a journey – compleat it”