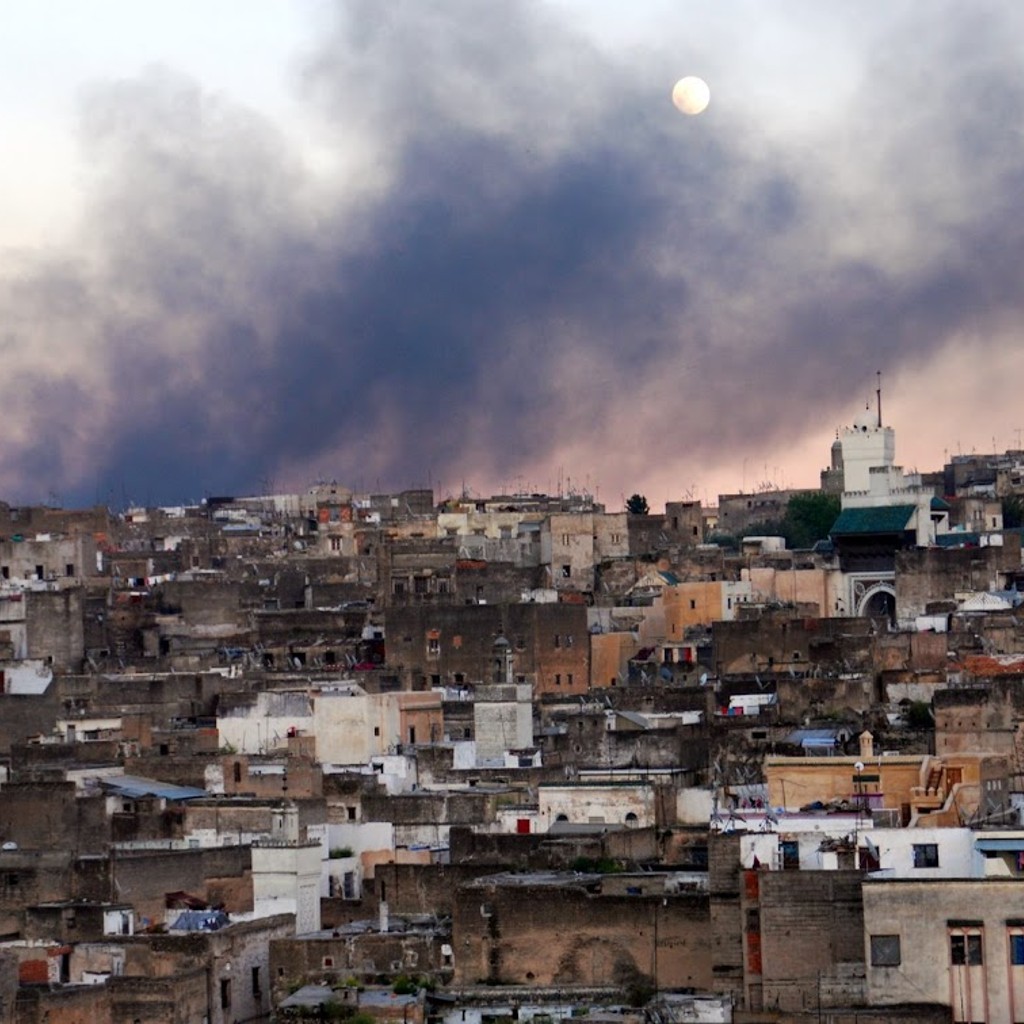 No Huggies in the Medina

You constantly have to flatten yourself against the wall as a mule laden with produce pushes past, first the Coca Cola donkey, then the cooking utensils donkey, then the gas donkey and on it goes.

The Riad
I’m here looking down on thousands of roof tops, all joined together by brownish grey walls dating back over a thousand years. The only evidence of change in that time is the sea of tiny satellite dishes that are perched proudly like sea gulls into a storm all facing the same way, the sun reflecting to create the effect of sparkling diamonds against the muddy backdrop. The almost eerie silence is suddenly punctuated by the Imans at over a dozen mosques who simultaneously commence the daily Islam teaching via speakers placed on top of the minarets. Between breaks, the Faqihs lead a chorus of chanting and singing that penetrates your very soul, the pitch rising and falling and the volumes changing with the wind. There is no escaping the performance, then again it’s not every day you get to spend Good Friday in Fes, I have a feeling the Easter Bunny won’t be visiting this year.

We arrived in Fes very late a couple of days ago after a long journey from Gibraltar, one of those places that you can tick off your list but would certainly not rank in your top 100.

Gibraltar
Gibraltar is a giant rock, controlled by the British, covered in monkeys, hollowed out with lots of military installations and caves. Good place for a pub meal, cup of tea and a slice of England if you must. The day started badly when we couldn’t find the Avis depot at the port of Algeciras. But eventually after driving the wrong way up a one-way street and doing a reverse park on the footpath, we made it to the ferry. It was supposed to take an hour but on arrival circled for two hours before docking which meant we would miss the Fes train, no real drama though as the next train was only 5 hours away.

The train’s are German rolling stock from the 80’s, a bit tatty but built to last so we could relax and watch the surprisingly green hills roll on past. There was a fun moment when we had to change trains and Denise was left standing on the platform, as the train started moving, another fellow traveler was hanging onto the train for dear life screaming at the top of her lungs. Eventually the train stopped when enough men on the platform heard her cries and alerted the driver. Later on, the conductor came to visit to ask who was screaming, we were very quick to point back up the carriage at the French chick who we had already dubbed “The Screamer”!

The unusually eventful day didn’t end there when a guide who we met on the train got into a near full on brawl with a bunch of taxi drivers just outside the medina. He claims he was protecting us, but who knows, it was probably more about protecting his commissions.

Life in the Medina
On arrival in Fes, we were met by Gail, who led us thru the dark alleyways and secret passages to a door. Wow!, as she opened this inconspicuous hole in the mud brick wall, we were welcomed into what looked like a palace, towering ceilings, dramatic archways, carved wood reliefs and tiny mosaic tiles on every wall. Our rooms opened out onto a courtyard, which was beautifully appointed with giant carved doors that were about 20 feet tall. Our host Gail was an interesting character, typical of the new wave of migrants, she was from the north of England, visited Fes for the first time a couple of years ago and couldn’t leave. A single mother with a young child she was adapting to the change, using humour as her guide. Quick with the lines, she told us some great stories of life in the medina. Learning how to use the communal oven, shopping for daily necessities and coping with one million people living in such a tight space. Everything comes in and out by donkey, you constantly have to flatten yourself against the wall as a mule laden with produce pushes past, first the Coca Cola donkey, then the cooking utensils donkey, then the gas donkey and on it goes. I asked her what would happen if the water donkey crashed into the nappy donkey? Would it create a giant blockage and traffic jams for miles? She replied “Oh no Karsten, that would never happen, there’s no Huggies in the medina!

Shopping in the Medina
Next day with the assistance of our wonderful guide Hakima we set out to explore the largest medina in the world. Without a guide, you have no chance of finding your way, every doorway looks the same, alleys twist and turn on themselves and occasionally it gets very dark and cold. We spent hours exploring the different souks, watched the ceramic makers creating beautiful bowls and plates. Imagine spending your whole life being the guy who fills in the blue colour on a plate, 8 hours a day for 50 years at a dollar a day. Near Place El Saffarine we watched an old guy carving a bronze dish, amazing intricate designs, all in his head. He will spend the next week bent over that same plate; polish it up, then onto the next! Standing in another shop, looking down at the tanners at work, knee deep in the red vats, I could only imagine what years of bending over scraping and dying skins could do to your mind.

Meanwhile the girls bought some bright colorful pointy shoes. Michelle got caught showing interest in a red leather jacket and I spent the next half an hour amused watching her politely trying to get out of the deal, refusing to get involved. She got me back at the carpet shop when she told the guy that you just need to keep showing me carpets until I find one and I’ll buy it. As in all the shops you just leave smiling, they say “welcome” and you merge back into the medina. Another dark alleyway, cooking smells emulating from hidden doorways, chanting and prayers from above and the huffing and puffing of fully laden donkeys. Walking through the medina is a little like life’s journey; even with guidance you can never be quite sure what is around the corner. As we were heading back to the riad, I suddenly stopped, before me was something I never expected to see today. There in a small shop in a dark corner, behind the toilet paper was a lone packet of nappies. A wry smile crossed my face, “who said there’s no Huggies in the medina?”