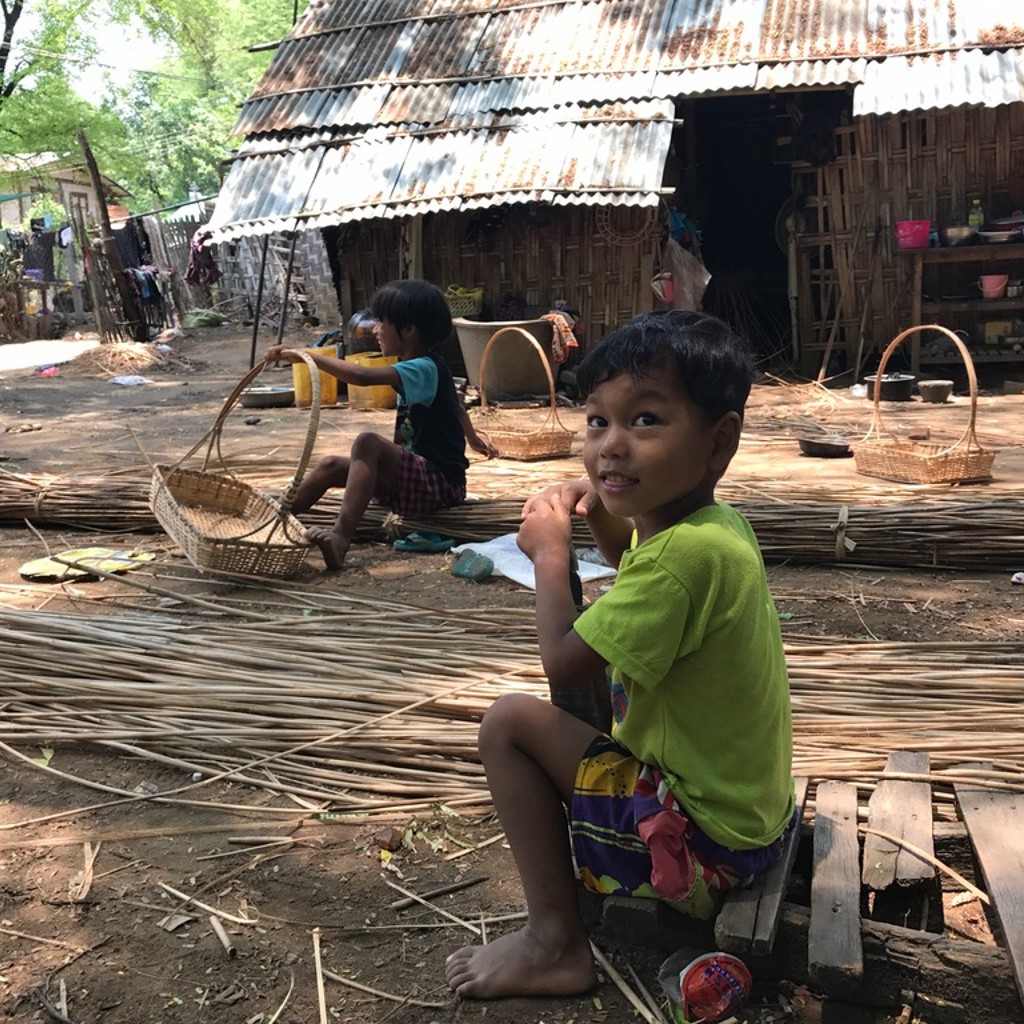 Myanmar gets a helping hand

On another occasion a youth group danced for us, it was only later that I realised that one of the dances was a lesson on what to do if you are approached by a child smuggler.

The seatbelt sign finally goes off which is what I have been impatiently waiting for. For the last twenty minutes I’ve been sitting upright, sipping champagne, munching on the gourmet food basket in front of me and flicking channels on the giant touch screen. I really just want to have a shower, jump into my pyjamas, lay the bed flat and start watching La-La Land. I get up and wander toward the front of the aircraft, noting that there is only one other person in the Emirates first class cabin which means that in reality we have one bathroom each. As I open the bathroom door I’m overwhelmed by the space and amenities, it feels like a Hollywood dressing room. As I’m getting changed my first thought is that although I have over 1,500 flights under my belt, I’ve never been naked on a plane. Yeah I know, weird thinking huh?

It is in that same moment, I look at the space on the floor and immediately think back to one day earlier in a village on the outskirts of Mandalay in Myanmar, where several of us where debating how a family of seven could survive in a house with an identical size floor space to the one I was standing in. The question of a toilet or shower never even entered the discussion.

Thidar, 58 years old is the head of that family of seven who survive by growing flowers in a field they rent out the front of their tiny house, which is just an A-frame bamboo shelter, the result of their more permanent home being destroyed in a storm. Until recently he was earning less than a dollar a day as a hired help.

However, a couple of years ago he heard about Vision Fund and over the course of several micro loans he has managed to establish his business, settle debt and provide better for his children. The family’s income is now closer to $20 a day which means they can start to improve their living arrangement and potentially send one of their children to university.

When I was offered the opportunity to join a group of high achieving, influential, purpose driven people on a World Vision/Vision Fund study tour to learn about the work they do in Myanmar, I couldn’t say yes quick enough.

Even the name Myanmar conjures up the exotic. Formerly known as Burma, it is the land of spectacular gold pagodas, beautiful people and an inspirational leader and Nobel laureate in Aung San Suu Kyi, whose image adorns bags and t-shirts across the country. Post war Burma was considered the country with the greatest potential in the region, with a high literacy rate and abundant natural resources. It is also a country with a dark past, with over 60 years of conflict which in the main, has dissipated although there is civil unrest in several border areas.

The guidebooks tell you that Myanmar has a population of 52 million with 135 distinct ethnic groups who are predominately Buddhist. What they don’t tell you is that there are over 600,000 displaced persons, 230,000 refugees and 17 large rebel factions that live within its borders. In addition, 25% of the population live on less than $1 a day and 50,000 women and children are trafficked each year across the Thai border.

VisionFund view Myanmar as the last great frontier of microfinance as there are very few of these operations in the country and given that 70% of the population has limited access to finance, they see their role as one of unlocking potential.

Microfinance provides the economic engine to enable the world’s poorest communities to turn business ideas and opportunities into successful enterprises. ‘Micro’ refers to the relatively small sums needed to provide start-up capital or funding for growth. Microfinance providers work with communities who don’t have access to mainstream financial services.

What is a Microloan?

Microloans involve lending small sums of money, often just a few hundred dollars, to people who do not have a measurable credit history, assets to secure the loans, or access to mainstream financial providers. They are designed to be realistic and affordable for borrowers. When they are repaid, the funds are recycled to other borrowers. This way a fund can support a number of different enterprises and help build a diverse and sustainable local economy.

In Myanmar, VisionFund currently has a portfolio of over 100,000 clients, 87% of which are women. The average loan size is $230 with a 6-month repayment cycle, remarkably the default rate sits at only 0.3% which is, in part, a result of the education and mentoring provided by loan officers but is also largely due to the tenacity of the individual lenders and the support they get from their community.

During our time in Myanmar we met many inspiring individuals who were either just starting to see some hope or were well on the way to unlocking their potential.

In Yangon we met Kuhin who at 39 years of age is a single mother with 3 young daughters, her youngest due to an intellectual disability demands her full time attention. Every day Kuhin rides her rickety bike 3 kilometres to her “shop” which is a 2 x 2 metre platform on a hot dusty street corner. She is accompanied by her youngest daughter and they sit there all day. Next to her is a large metal bowl filled with frozen chicken pieces, a large chunk of ice and a constant buzz of flies. For Kuhin the meagre contents of that bowl represent hope and a future for her family. A loan from VisionFund will enable her to expand her business and take that first step out of poverty.

In Yangon we also met Hla, 52 years of age. She is married and has four children who all attend school. She runs a business that trades in fried onions. Only four years ago she entered into this line of work and now she is into her 9th loan cycle. The result is a bustling business that has transformed her house into a factory that employs 30 workers. The conditions are not great, after only a few minutes the heat of the ovens and the smell is overpowering, however the fact that Hla had not only secured her family’s future but created job opportunities for her community, inspired all of us.

Thae is in her early 20’s and is another one of the lucky ones. To support her family as a child she earned money by washing plastic bags after school. A dangerous task as she would often walk home alone after dark. Then, one-day World Vision came to her village and introduced her to vocational training. This changed her life, roll on a few years and she has become a designer who teaches and employs several young women. It is not uncommon for desperate families to sell their own daughters into slavery, however with Thae’s mentoring these young women are no longer a burden, instead they represent a sustainable future to their families.

One day an entire school founded by a loan recipient, performed a concert for us. Each of us were welcomed with a flower garland, I can still picture the ear to ear smile from the tiny girl that was assigned to welcome me as I knelt down to receive it. On another occasion a youth group danced for us, it was only later that I realised that one of the dances was a lesson on what to do if you are approached by a child smuggler. Then we stood in awe as one of the dancers revealed she had escaped from her abductor and was here to empower other young woman by sharing her story.

As I return to my seat, I notice that in my absence the air hostess has made my bed and a cup of tea is waiting for me. I reflect that I am at the pointy end of the plane because it is my great fortune that I was born in the right place at the right time. Also, I am lucky enough to have ended up in an industry where occasionally, an outrageous level of luxury is offered to us in the hope that we will convince our clients that it is a responsible way to invest their hard earned.

A trip like this works to raise your consciousness and understanding but then it can go can two ways, you can use the experience as a means to justify our superior existence or it can motivate you!

It has motivated me to continue investing in microfinance and to use my influential position in the travel industry to change the world. #traveltochangetheworld

VisionFund International, World Vision’s microfinance arm, has been improving the lives of children in the developing world for more than a decade. By offering small loans and other financial services to families living in poverty, its clients develop successful businesses, enabling their children to grow up healthy and educated. In 2015, VisionFund International MFIs provided 1.3 million loans, with nearly three-quarters of these going to women, and over half to clients actively involved in farming. Repayment rates were 98%. Also in 2015, close to four million children were impacted through its MFI network located across more than 30 countries in Africa, Latin America, Asia, and Eastern Europe. For further information, please visit www.VisionFundInternational.org