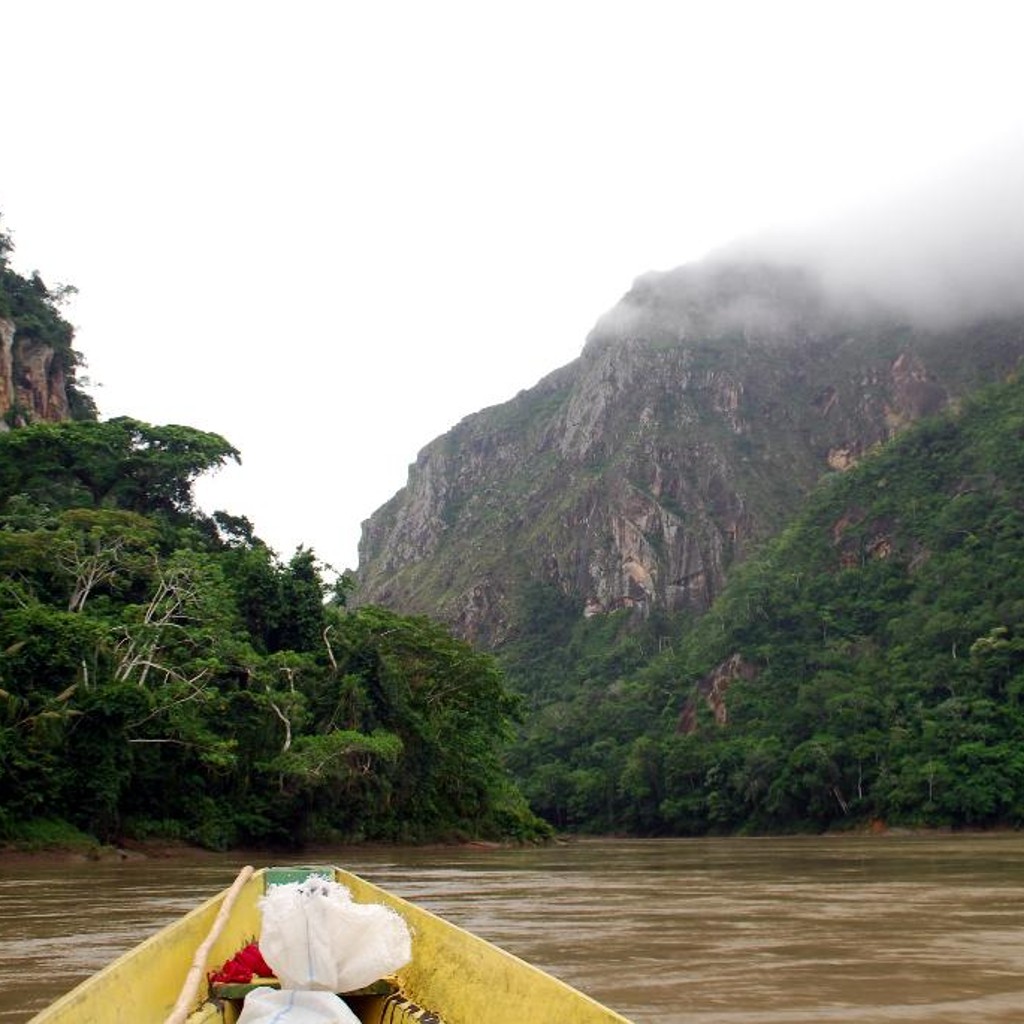 The hair on his thick black legs stuck up like the effect of static electricity whilst his rump had this orange hue that contrasted severely with the rich dark browns of the wet jungle floor.

It was pitch black, so dark that we momentarily lost our awareness of being – however, with one sense shut down the others slowly gain strength. The noise around us was deafening, shrill screeches, sharp whistles, crashing sounds, cracks in the distance and this constant buzzing noise around our heads. Breathing was easy as the air was incredibly rich, but the oxygenic benefits were overridden by an intense damp rotting smell. I was sweating intensely which was countered by a constant dripping which kept me cool, I shifted my weight slightly to ease the tension and was met by a whispered – “iestate quieto” (don’t move).

Suddenly the guide’s torch flicked on, there down at our feet was a giant tarantula, exposed at the entrance to his burrow – like us he just stood there rigid. He appeared to be staring up at us, no doubt blinded by the bright white light. The hair on his thick black legs stuck up like the effect of static electricity whilst his rump had this orange hue that contrasted severely with the rich dark browns of the wet jungle floor. Whist he was no doubt contemplating his next move; we just stood there in silence admiring this beautiful creature which must have had a diameter of least 15 centimetres. The tension was finally broken by a sobbing that grew louder and louder, I turned around to see the girls embraced in a tight hug, tears running down their faces. I think it was time to return to the comforts of our lodge; our hairy friend felt the same and took the opportunity to make an honourable retreat back down his hole.

Our lodge, known as Chalalan is a world class eco lodge located in one of the richest and most protected areas of the planet, known by scientists as a biodiversity hotspot. It is host to some 45,000 different plant species and over 1,000 tropical bird species. It straddles the shore of Chalalan Lake, in the Tui valley at the heart of the Madidi National Park in the Bolivian Amazon.

We arrived at Chalalan after a journey which started in La Paz where we boarded a long cigar shaped plane of questionable heritage and pockmarked scratchy windows. After taking off we skimmed across the top of a snow-capped range then flew downhill over craggy hills that quickly gave way to the tree tops of the thick impenetrable jungle. We spent a night in a primitive prison like hotel in a dilapidated frontier town known as Rurrenabaque which is the gateway to the Bolivian Amazon. The next morning we boarded a long boat for an enthralling five hour journey along the Beni and Tui rivers, the fast flowing brown water constantly changed from being full on white water that surged between steep escarpments to a wide and smooth flow that was fringed by the overhanging jungle. The boatmen clearly knew every inch of the river, navigating around any obstacles with ease – a small path with a discreet wooden sign marking the entrance to the lodge was the only clue that our journey had ended.

However my journey to Bolivia started many years earlier in Peru. Back in 1982 I spent six months backpacking through South America during what were turbulent times for the continent. Being only seventeen I was guided and influenced by others on the road. I still remember one night in Cuzco, where a group of German backpackers tried to talk me into following them south to Bolivia, momentarily tempted I eventually resisted as my ultimate destination was Colombia to the north.

It would be 20 years before Bolivia again came to the forefront for me. This happened in a most unexpected fashion when one day I was sitting in a travel agents conference amongst 100’s of delegates and as usual they roll out a guest motivational speaker to get you all inspired before they equip you with the tools to change your world. This time it was this Israeli guy called Yossi Ghinsberg who apparently got lost in the Amazon. Yossi told this self-described “harrowing true story of adventure and survival” that had us all enthralled, the audience were transfixed by his description of the jungle and how he not only battled with but how he worked with elements.

Although, I too was lost in his story, as I listened I drifted back to my first trip to South America and realised that coincidentally our timelines crossed within days. It appears that Yossi was also in Cuzco, planning to head north but was talked into an adventure further south in Bolivia, that ultimately changed his life. Yossi and I never got to compare notes as the autograph queue was too long and the muffins were fresh, but one of my colleagues scored a signed copy of his book which I eventually secured many years later once she lost interest in it.

My dream involving giant spiders, life changing decisions and hot Amazonian jungle women is cut short when I’m awakened by the sound of the shower turning on and my wife reacting to the cold water. The warm sun is already streaming in through the windows as I untangle myself from the mosquito net that is so thick I feel like I’m trapped inside a royal wedding dress. I jump out of bed, walk barefoot across the polished floorboards down the steps, and then wander alone along the jungle path toward the community house where a handful of guests are tucking into a spread that is fit for a king.

Sergio, our guide has mapped out a full day for us utilising the maze of paths around Chalalan that have been meticulously designed to show off the forest, ecological processes, natural history, medicinal plants, hardwood trees, birds, mammals, amphibians, insects and a variety of fungi native to the tropical rainforest. It turns out to be one of the most fulfilling days of our lives, every few minutes we stop and marvel at something we have discovered. The yellow tailed monkeys follow our every move showing off trying to get our attention, way above them the cappuccino monkeys just look down bemused at their flashy brethren below. Sheridan is fascinated by the fungi, running from log to log, camera in hand, zooming in to try her best to capture their rare beauty and fragility in the low light of the jungle floor. Every few metres we stumble across a new species that is more exotic than the last – we learn later that there are 15,000 species of fungi within 15 minutes’ walk of the lodge.

After lunch, we explore the lake by dugout canoe and I get the opportunity to chat to Sergio Apana, our 28 year old guide who like all the other guides is from the community of San Jos?e Uchupiamonas. He has been at the lodge for six years and tells me that he has been trained in environmental education, natural interpretation of the forest and ecological processes. He maintains an incredible knowledge of medicinal plants, trees, animal behaviour, and myths and beliefs. He interprets the forest using a combination of traditional knowledge handed down by his ancestors and incorporates scientific knowledge gained from three years of constant reading after leaving secondary school in Rurrenabaque. He speaks perfect English, Spanish and the local Aymara dialect and knows the Latin term for thousands of species.

I ask Sergio how the lodge came about and he tells me that the village decided that the only way they could save the forests, animals, rivers and lakes was through ecological tourism. The current generation was struggling and they believed that creating Chalalan Eco Lodge was their only hope in passing on the culture and traditions of their people. I was then surprised when he related the story, told to him by his father, of the legendary Yossi Ghinsberg who was rescued by his father’s friends on a beach near his village, the year before Sergio’s birth. Yossi made a commitment to return to the village where he helped raise funds and was instrumental in the construction of the lodge. Sergio had never met the man but was surprised that the Israeli was my inspiration for coming to Bolivia, although until Sergio told me I was not aware of Yossi’s connection with the lodge.

Our conversation was interrupted by a small caiman that quietly slipped past the stern, unnoticed by a magnificent cormorant perched on a branch nearby but identified immediately by Sergio as a Caiman crocodilus. After a full day of taking in so much knowledge and appreciating the wonders of nature we wound down with a traditional farewell dinner. This involved the guides playing instruments fashioned out of indigenous hardwood whilst we danced with some of the local women, much to their amusement I was completely out of time but tall and exotic enough to hold their interest. The final act of the night was a ceremony thanking the earth deity Pachamama (Mother Earth) which involved chewing coca leaves mixed with palm root and bicarb of soda, followed by sculling a mixture that was rumoured to be puma milk but was actually a mixture of milk, water and pisco sour. We all did our best not to choke on the leaves but fell about laughing as one by one we spat this milky green mixture onto the jungle floor.

It got me wondering why we have to travel so far off the beaten track to find a place where mother earth gets the respect she deserves, yet there were so few of us here to pay her respect or even take it seriously.

Upon returning home from Bolivia I read an uplifting article that took me back to that moment and wished I had of observed the ceremony with a just a little more respect. Bolivian parliament has recently passed a law that totally reassess existing values and adopts the viewpoint of their ancestors. It is called the Law of Mother Earth which includes rights such as the right to life and to exist; the right to continue vital cycles and processes free from human alteration; the right to pure water and clean air; the right to balance; the right not to be polluted; and the right to not have cellular structure modified or genetically altered.

The Bolivian government has said that it will in future develop projects that affect the balance of the ecosystems and the local inhabitant communities.

The Law of Mother Earth suggests that both Yossi and the villagers of San Jose Uchupiamonas were well ahead of their time.