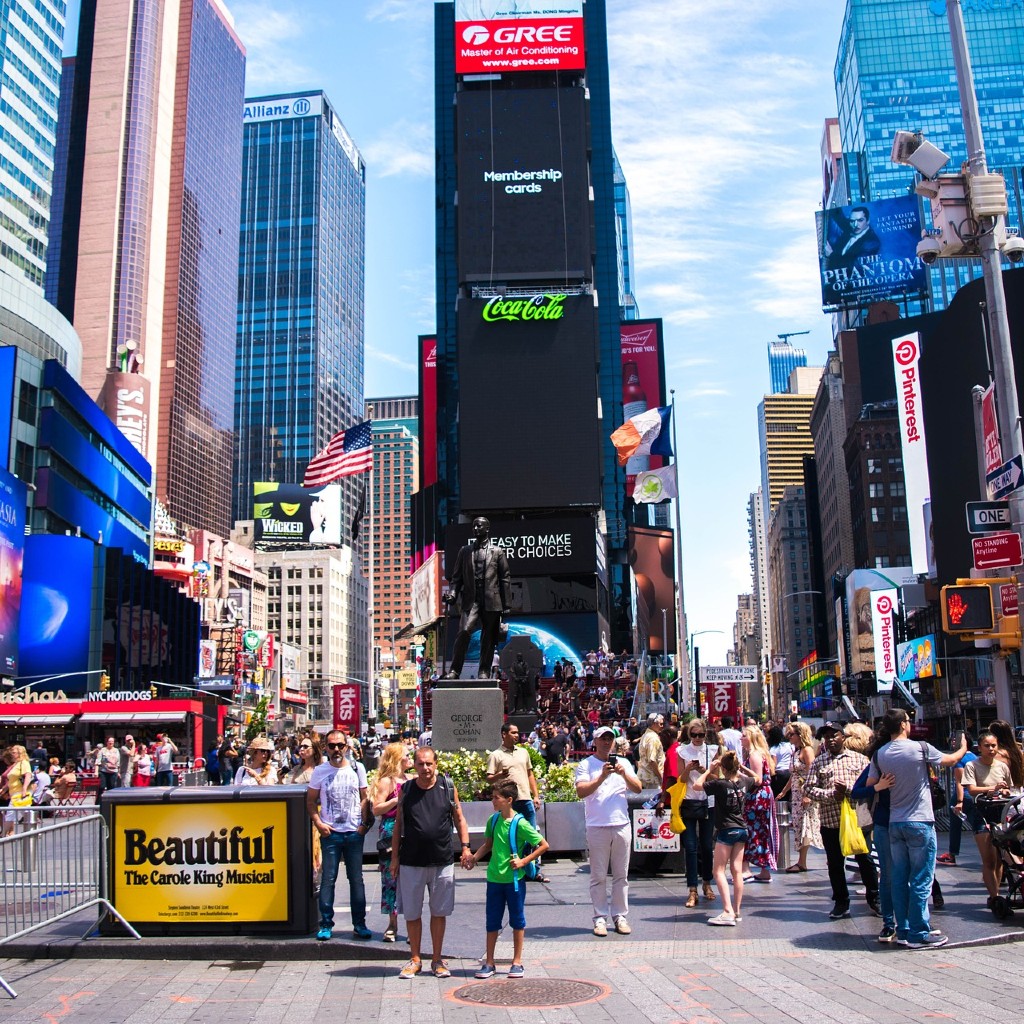 We were taken by stretch limo, indulging in champagne and chocolate dipped strawberries as we drove through the streets of New York, to Chelsea Pier, where the boat waited for us.

Everyone I know that’s ever been to New York has absolutely loved it.  I have to confess the first time I went this was not the case, I really didn’t like it at all!  It was many years ago, when there were lots of areas of Manhattan that weren’t safe for tourists to be in.  If you were brave enough to use the subway, then you were told not make eye contact with anyone!  The main reason I didn’t like it was I just didn’t feel safe.

Thanks to Delta Airline and Octopus Travel, I’ve now experienced New York for a second time, and what a different experience it was!

I was very impressed with Delta Airlines, the cabin crews were all very friendly and attentive, and the Sydney to Los Angeles flight was amazing!  On boarding our flight in Sydney we were warmly greeted by the friendliest cabin crew I’ve ever come across.  As we settled into our very comfortable business class seats, with our pre-departure drinks, the captain came along and individually introduced himself shaking hands with all the business class passengers.  I got the impression he would have done the same with the economy class passengers if he’d had the time.   The seats recline to a fully flat position, that combined with the doona and two pillows made for a really good sleep.   There was a wide range of movies to choose from, and the meal service was unbelievable.  There was so much food, and our drinks were constantly topped up, nothing was too much trouble.  It was refreshing to fly with an airline where the crew made you feel extremely welcome and they seemed to actually enjoy their jobs!  One of the crew we spoke with during the flight said she had been a flight attendant for 50 years and still loved it!

Octopus Travel organised the land arrangements for our 5 days in New York and we managed to cram a lot into that time.

Andaz all Street Hotel – which is part of the Hyatt Hotel Group, I really liked the Andaz, even though there are 253 rooms it has the feel of a much smaller boutique hotel about it.  Our “New York Loft-style” rooms were huge.  The large widow’s letting in plenty of natural light, wooden floors and light furnishings made them feel even bigger.   The bathrooms area was quite dark in comparison, but are also very large.   The rotating wardrobe was very cleaver use of space and a bit of a novelty.  It’s  4 sided, mirror on one side, wardrobe on another,  bathrobes and shelves on the next and the last side is the minibar.

Grand Hyatt at Grand Central Station – is where we spent the next 2 nights. It’s a very busy very large hotel in a great location, attached the beautiful Grand Central Station.  My room was spacious but it only had two small windows, so it didn’t have that light airy feel to it.  The bathroom was fairly small, with just a shower and no bath. We did inspect a few hotels they are all 4 star and have the all facilities you’d expect in a 4 star hotel.  Each inspection coincided with a meal so here is a rundown of my thoughts on the hotels and the food.

The Marriott Marquis – This is a massive multi story hotel in a great location at Times Square, with   fairly large rooms.   We had dinner in The View Restaurant, which is a revolving restaurant on the top floor.  Of course the views were amazing and the hot/cold buffet was nice but nothing special.  Until it came to desert that is, I think the desert bar was bigger than rest of the actual buffet.

The Beacon Hotel –   I really liked this hotel.  It’s on the Upper West Side, close to Central Park.  The rooms are large and homey, they all have kitchenettes.  It felt more like you were in someone’s apartment rather than a hotel.   The Beacon Bar has just been renovated and looks like a great place for a few drinks, they also serve light snacks.  We didn’t eat in the bar, instead a breakfast was provided for us in one of the meeting rooms, which added to the feel of being hosted in someone’s home.

The London New York –  Very impressive all-suite boutique hotel.   Being suites the rooms are very large, beautifully decorated and very luxurious.  We were thoroughly spoilt with lunch at MAZE by Gordon Ramsay, it’s a bistro style restaurant and the food was amazing!   I can only imagine what dinner in the fine dining restaurant Gordon Ramsay At The London would be like.  We did get to look inside and have a tour of kitchen as well.  Unfortunately Gordon wasn’t there but he’d left a signed menu for each of us.

Kitano New York – A Japanese owned boutique hotel,  with a Japanese influence throughout.  The rooms were a nice and most have great views.   We were treated to a Japanese seafood banquet in the Hakubai restaurant for dinner.  Both the food and the service were fantastic!

Affinai Manhattan – This hotel has recently been renovated and is still undergoing renovations to the lobby.   There are about 10 different room types.  Ranging from the rather small “Petite Guest Room”, which would be fine for a couple of nights stay.  Up to the Two Bedroom apartments , with 2 bathrooms and a kitchen.    We had breakfast at Niles New York City Restaurant & Bar, which is attached to the hotel lobby.  It’s not owned by the hotel but, meals can be charged to the rooms and they also provide the hotels room service.

The Sofitel New York –  This is a very elegant hotel.  The rooms we saw were very spacious and light with great views.   The Gaby Restaurant serves Contemporary French Cuisine which is of no surprise as it’s a Sofitel.   Breakfast was lovely, but my favourite part was the plunger coffee.  Gaby is a great place to sit with a coffee and watch New York pass by.

In between hotel inspections we found time to for some sightseeing.

The hop on hop off bus was great way to see New York.  A 48 hour pass covers Downtown, Uptown and Brooklyn.  The only down point is it can take a lot longer than the suggested time because the traffic can be very slow.

We also did The Top of the Rock, which is the observation deck at the Rockefeller centre.   The sun was shining and the sky blue and the 360 views of Manhattan from the 70th floor open air viewing deck were amazing.

Times Square at night, with all the lights, people and constant sound of sirens was quite an experience.   If all the noise and craziness isn’t your thing, I can highly recommend heading to the R Lounge at Two Times Square.  It’s a bar at the Renaissance Hotel, that sits right in the middle of Times Square, the view is amazing and the Martini’s are good but very strong.

We even managed to fit in some shopping.  With their seasons being the opposite to ours there were plenty of winter clothing bargains to be had.  Luckily Delta Airlines have a very generous luggage allowance!

No trip to New York would be complete without seeing the Statue Of Liberty.   Most people take a ferry and do a day trip, but Octopus Travel had something a little different planned for us.  We were taken from the Grand Hyatt by stretch limo, indulging in champagne and chocolate dipped strawberries as we drove through the streets of New York, to Chelsea Pier, where the boat for our Bateaux Dinner Cruise waited us.  The boat cruises the Hudson and East Rivers, under the Brooklyn and Manhattan Bridges.  The huge windows mean very one gets a great view, as you cruise along watching the changing city skyline in the setting sun.  With food, drinks, entertainment and dancing it’s a fun way to see the New York skyline.   The highlight of the night is cruising right up close to the Statue of Liberty.

I’m so glad I got the opportunity to go back to New York, to catch the subways and wander around Manhattan.  The best part was I felt safe the whole time I was there.

Now I can finally say what everyone else that’s been there says ……..   I love New York!