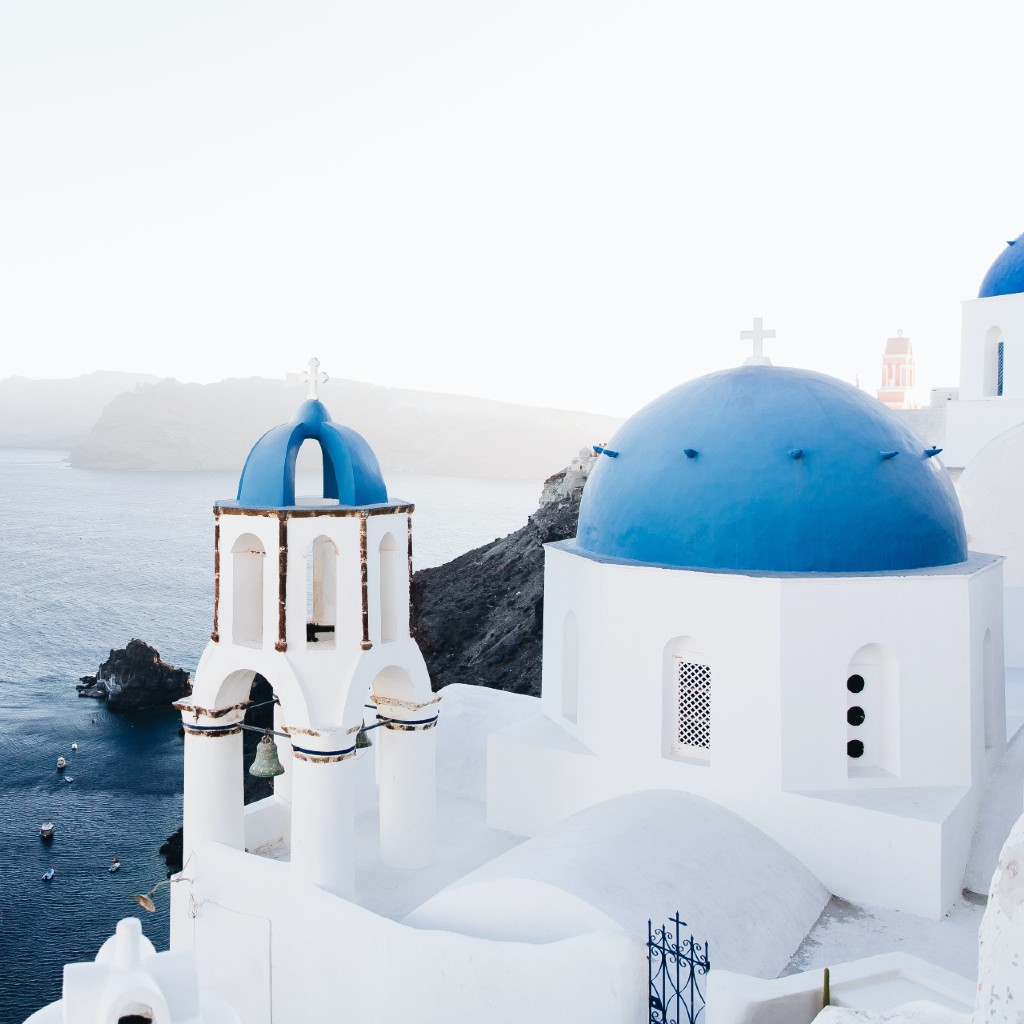 Meteora is included on the UNESCO world heritage monument. The monasteries are perched on top of towers of sandstone, which for centuries provided totally inaccessible retreats for the monks.

When I booked my trip to Greece I would never have imagined a mere 8 months later, they would tumble into an economic crisis….we had no idea what we were flying into, all we knew was that we had to take a lot of cash because there was a limit on withdrawals at the ATMs (or there was no money left in them at all!) However, after all the ‘stress’ we were very lucky and had an amazing time – the crisis, for us, was a non-event!

My airline of choice was British Airways.

Premium Economy Sydney – London / Economy London – Athens
I flew British Airways (BA) World Traveller Plus (their premium economy class) over 10 years ago, the product has certainly improved considerably since then. BA has one flight daily to Sydney and they fly a 777, it is their newest product in all classes, the seats are wider with a greater recline, there is a foot rest and also extra leg room.

I try to time when I sleep on such long flights to enable my body to adjust to the time difference, so I stayed awake SYD-SIN ready to sleep on the long flight from SIN-LON. It worked; I watched a few good movies on the first flight and got a good 8 hours sleep on the next.

We allowed 2 hours for our connection in London from Terminal 5 to our onward flight to Athens.

As we disembarked a British Airways staff member was there to transfer us to our next gate, this was a big help, we were tired and delirious, but we made it and so did our luggage!

Be warned check in at Santorini airport is a nightmare!! Even in business class, there was no organisation and no control for any flights departing. Check in began around 2 hours prior to departure, however there was only one staff member. Thankfully, a second BA line started for business class so we jumped into this queue, but we had already been lined up for at least an hour…..once checked in we walked our bags over the x-ray machine and put them on ourselves, they are then taken away for the flight.

Once we were through security we were faced with hundreds of people waiting for their buses to take them to their plane….there were three departures within the hour and the airport is pretty much like a tin shed. I have had better experiences in third world countries, I really didn’t expect it. There is NO lounge in Santorini airport!

On board we were able to de-stress, change into clean clothes for our arrival into London.

The Club Europe seats are not larger but in between 2 seats is a spare seat with a tray so you have more room. The meal on board was sensational and the staff were fantastic!

Coming Home – Business Class
Our flight ex-London was delayed by one hour. We enjoyed the BA lounge, lots of food and beverages.

I was really tired on this flight, by the time the flight took off my seat was reclined to the fully flat position and I was fast asleep. No ear phones, no eye mask I slept solid for 11 hours. When I woke it was time for breakfast, watch another movie and we were on our descent into Singapore.

As the flight was delayed out of London, our connection in Singapore was very tight. We had time to stretch our legs and walk to the Qantas Lounge. The Qantas lounge in Singapore is really impressive and the food and drinks available are the best I’ve had in a long time!

I would definitely fly British Airways again, whether it’s just to Singapore, London or onto Europe their connections are fantastic!

Where to stay and what to do in Greece:-

Athens
Landing in Athens, we went to our hotel – The Athenian Callirhoe Hotel, showered and put on our walking shoes….the hotel was in a great location and walking distance to everything. Said to be a 4 star hotel, the rooms were clean but nothing special. The hotel has a roof top bar with great views of the Parthenon.

We left the hotel and explored, had an amazing lunch, did a lap around the Parthenon and went to the museum before the sunset….I love European summer and the long days!

We did a half day coach tour, with a drive around Syntagma square, passing by National Garden, Hadrian’s Arch, St. Paul’s Church, Parliament, Tomb of the Unknown Soldier, Catholic Cathedral & Schliemann’s House. We stopped for a photo at Panathinaiko Stadium where the first Olympic Games took place in 1896, then finished at the Temple of Zeus.

We had passed most of these places when we walked around, so I probably wouldn’t pay to do a city tour, just jump on the hop on hop off bus.

I really loved Athens and it was the perfect start to our holiday, I would recommend 2-3 days there.

After our stay in Athens we were off on a 2 Day Meteora Monasteries Tour with Delphi, the tour included coach transportation, guide, entrance fees, breakfast, dinner and ‘’first class’’ hotel.

Day One Athens – Kalambaka
We departed through Thebes, Levadia and Arachova for DELPHI. Famous for its theatre, Temple Of Apollo and ancient ruins and known for being the naval of the universe. The site is amazing, make sure you have good shoes, hat and sunscreen with plenty of water!

Overnight accommodation at Divani Kalambaka Hotel – a good pool and lovely rooms! It was nice to swim after a long day of walking in extreme heat!

Left in the morning for nearby Meteora for a tour of the cliff-top monasteries and to visit two different Byzantine Monasteries built on top of rock towers. Meteora is included on the UNESCO world heritage monument. The monasteries are perched on top of towers of sandstone, which for centuries provided totally inaccessible retreats for the monks. Meteora is one of the most unique and mesmerizing places I have ever visited.

The drive home is long….and frustrating but it was worth the journey. On the way back we stopped at the heroic monument of Leonidas King of Sparta in Thermopylae (War of 300 Spartans- I’m sure everyone has seen the movie?!)

Greek Island hopping
High Speed ferries are the ONLY way!

We booked first class, which I would strongly suggest. There was no hierarchy for boarding, it was more like a herd of cows trying to get on board in each location….luggage and people everywhere, but it seemed to work.

On one ferry we didn’t think our luggage would make it given it was placed on the back of the boat and we hit some big waves….but we all made it safely. On board in first class, you have a different area for seating which made the journey more comfortable.

Mykonos
The boutique Myconian K Hotel a 15 minute walk from Mykonos Town, had everything! The pool was freezing, but we had a Jacuzzi which we spent most of our time in. The hotel also had an amazing restaurant, expensive but worth it!

Our view was over Mykonos Town and the famous windmills. I was not prepared for how windy Mykonos was but was a fun island. The hotel is close to all of the famous beaches, Omos, Paradise, Super Paradise and many more.

We found the best way around was to hire a quad bike and we did this on every island. Once you are used to driving on the other side of the road and dodging backpackers riding like idiots and no helmets….it was fine! We paid between 30-45EUR per day depending on the island and that included insurance and helmets!

Great shopping and restaurants and make sure you have dinner in little Venice and watch the amazing sunset. Watch out for Petros the Pelican, he is famous around little Venice- we saw him!

If you are into partying then Mykonos is your island!! We spent 3 nights here which was enough to see the sites.

Paros
After the hustle and bustle of Mykonos, Paros was our time to relax. Our hotel was located in Naoussa Village which is around 25km from the town which is a beautiful little fishing port. Kanale’s hotel is set on different levels on a hillside overlooking Piperi Beach, Naoussa harbor & the Aegean Sea across to Mykonos

The Kanales Hotel was quaint and the room spacious. There is a roof-top lounge-bar with stunning views, and the food on Paros was amazing, everywhere we ate was sensational!

We had quads in Paros so road around the island finding secluded beaches. We hired a boat for half a day with Captain Theo, we swam in blue lagoons, went to the pirates cave and went to Antiparos. Snacks and drinks were included, it was a truly amazing day and well worth it! Make sure you book!!

Santorini
After two amazing islands I was not prepared for how stunning Santorini was! Villa Renos is located in Fira, with a view out across to the Volcano and the famous Santorini Sunset, it is the perfect location, you really don’t need to leave your room. Breakfast is included and has to be one of the strangest I’ve had…it’s too hard to explain.

We spent our days on our balcony and in the Jacuzzi, watching the magnificent sunset.

We took our quad to Oia, everyone warned us to be careful on the roads because of the amount of accidents. It was pretty daunting, but lots of fun! It is said that the sunset is better at Oia, but when we arrived at the town so did 5 cruise ships, it was hectic….so we made our way back to our side of the island.

Santorini was the most amazing way to top off our Greek holiday and I would certainly go back! The people were extremely friendly, the food was to die for and the heat and beaches were spectacular!