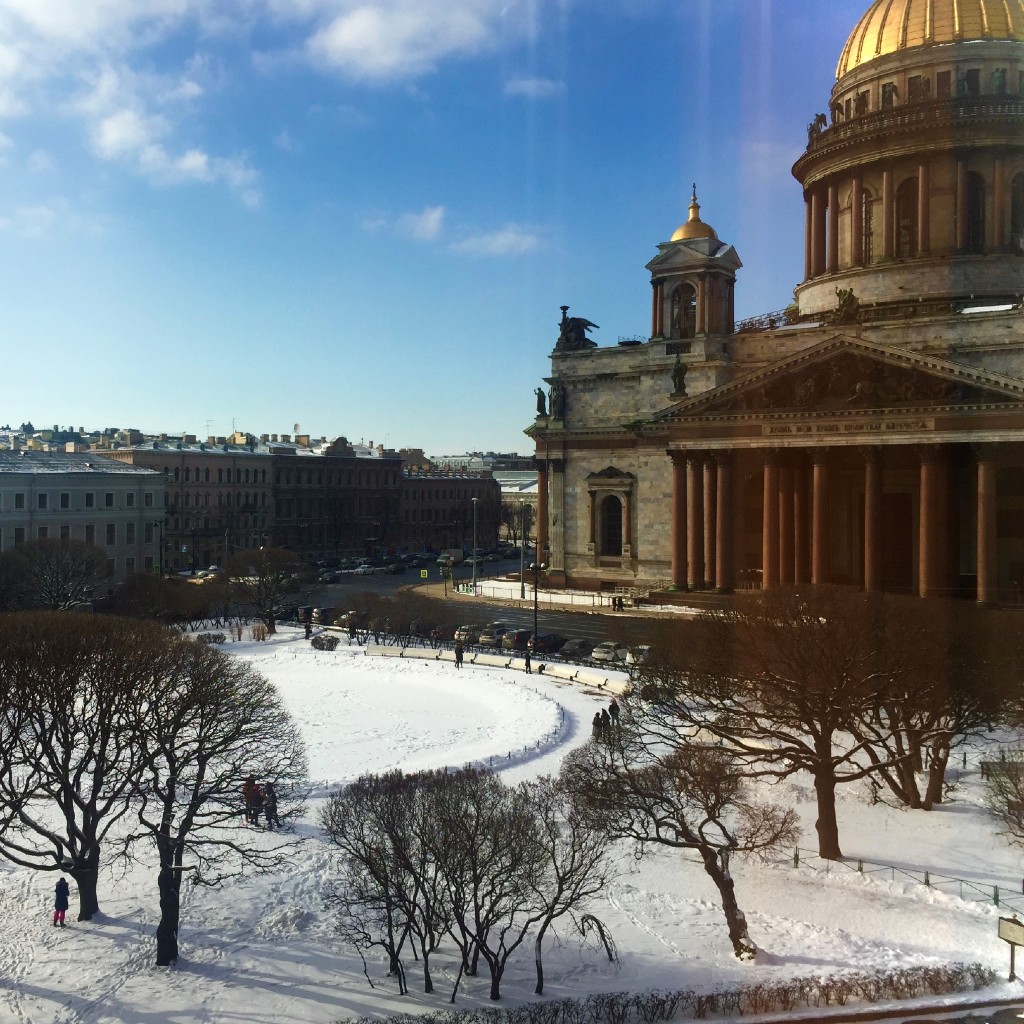 From Russia with love

The three-hour trip between cities was convenient and comfortable, particularly as we travelled in First Class. Check-in involved a security check point for your luggage with duty-free sales available.

An educational to Russia doesn’t come up very often, so when I was offered a trip to St. Petersburg thanks to 50 Degrees North and Qatar Airways I jumped at the chance!

I was excited as the trip included some time in Helsinki, Finland and then I realised snow was still falling and temperatures were below zero in both cities, so I started pulling out the winter woollies!

Qatar operates an Airbus A380 aircraft on the flights between Melbourne and Doha (and return). Our departure from Melbourne was at 10.30pm, allowing for some late evening dining accompanied with some alcoholic or non-alcoholic refreshments. Business Class on the A380, located on the upper deck of the aircraft, I found to be much quieter than the main deck. The take-off from Melbourne was also incredibly smooth; it didn’t feel like we were flying at all! The seating was in a 1-2-1 configuration, with the two seats in the middle sporting a privacy screen. The seat can be electronically moved into various positions for comfort, and fully reclined into a flatbed for sleeping. The hostess provided a thin mattress to prepare the flatbed for sleep, along with pyjamas and a duvet. With the seat fully reclined, I was able to completely stretch out and get into a comfortable position for sleep.

The dining options for business class were “Dine on Demand”, an a la carte menu allowing us to enjoy as much or as little food as desired at any stage during the flight. There were many options from light snacks all the way through to desserts, I enjoyed most of the food I ordered.

The inflight entertainment system called ORYX offered many latest release movies as well as a back catalogue of classic films, TV series, documentaries, music and kids movies and games. Noise cancelling headphones are provided in Business Class which were a great addition and make the viewing experience more enjoyable.

A great feature of travelling in Business or First Class on the A380 is the lounge area where travellers can gather for some light snacks and drinks. The space is quite large, with comfortable seating. The lounge was surprisingly quiet, perhaps because of the late-night flight when most wanted to relax in their seat and get some rest. For those that couldn’t sleep, or wish to have a nightcap, the lounge is a pleasant place to hang out.

For our flight between Doha and Moscow, the aircraft was a smaller Airbus A321. Business Class on this service was in a 2-2 configuration with only 12 seats in total. The seat was slightly larger than Economy Class and reclined further, although not to a complete flat-bed. I would compare the seat to a premium economy option.

The “On Demand” dining and in-flight entertainment was the same as on the A380 aircraft. I did notice that the tray table was slightly small for the size of the plates that the food was served on, making things a little awkward for the flight attendants.

On our return, we flew out of Helsinki on an Airbus A330 aircraft. The Business Class seats on this flight converted into a fully flat-bed, however the seat was narrower and a little cramped around my feet when moving around, however still a good product to relax and sleep. Once again the dining and entertainment options were the same, keeping the experience consistent for all flights.

Overall the Business Class product and service on Qatar Airways was fantastic, and, considering there are often very competitive airfares in Business Class available on Qatar, great value for money!

Siberia Airlines – Economy Class
Our connecting flight from Moscow to St. Petersburg was operated by Siberia Airlines. On the short one-hour flight I wasn’t sure what to expect but was pleasantly surprised. Passengers are offered a complimentary snack (choice of sandwich on this flight) and drink. Seating on the aircraft is all Economy Class in a 3-3 configuration. There is no in-flight entertainment, however for the short flight this was manageable. An efficient and friendly service for this domestic connection.

Allegro Train Service St. Petersburg to Helsinki
The three-hour trip between cities was convenient and comfortable, particularly as we travelled in First Class. Check-in involved a security check point for your luggage with duty-free sales available. Customs and immigration clearance for both Russia and Finland was completed on the train as we travelled. Breakfast is offered in First Class, with a choice of several options including a reindeer sandwich, free Wi-Fi is also offered. Overall an easy way to travel between St. Petersburg and Helsinki.

The hotel is very new, with clean modern rooms containing marble bathrooms. There are two onsite restaurants, the main one, Parc, also hosts the buffet breakfast each morning. The hotel also offers a bar to relax in the evenings. The hotel has recreational facilities including a spa, beauty salon, gymnasium and a fantastic indoor pool.

A slick, modern hotel best used to explore the Pushkin Area for a day or two, or whilst attending a local conference in the Expoforum, before relocating to a more city central hotel.

Kempinski Hotel Moika 22 – St. Petersburg
Located in the centre of the city and on the Moika River, this classic and elegant luxury hotel is a short stroll away from St. Petersburg’s Nevsky Prospect, where all the main shopping outlets can be found.

Our rooms were sophisticated and spacious, with high quality fittings and a Room Comfort Menu available to select aromas, bedding, pillows and a selection of toiletries including bath salts and oils. The bathrooms were large with a luxurious bathtub and quality amenities.

The hotel had a choice between five restaurants and bars and served both English and Russian high tea in their Tea Rooms. The Kempinski Hotel is also the location of The Von Witte Bar, a popular bar in St. Petersburg, that features views over the Moika River and has the feel of a gentlemen’s club, with dark wood, leather chairs and a library. Another popular feature of this hotel is the rooftop restaurant and bar, Bellevue Brasserie. The restaurant has 360-degree views of the city, serving French cuisine and local Russian favourites. We were lucky enough to enjoy a dinner in this restaurant and were stunned by the amazing views.

I highly recommend this hotel as it is in a great location, and has fantastic service and facilities.

Hotel Astoria – St. Petersburg
A local St Petersburg landmark and the most famous hotel in the city, Hotel Astoria is an amazing property. This grand hotel opened in 1912 and is situated the centre of the city, opposite St. Isaacs Cathedral and within walking distance to the Hermitage Museum.

We were accommodated in a Deluxe Junior Suite, which was enormous, with a separate sitting area containing a work desk and sofa. The rooms overlooked St. Isaacs Cathedral and Square and provided us with amazing views. As the hotel was featured in the movie From Russia with Love, the marble bathrooms were decorated with prints from the James Bond film.

There are four restaurants and bars to choose from at the hotel, including the Lichfield Bar. Open 24hrs, you can relax and unwind to live jazz during certain times of the day. The Rotonda Lounge serves afternoon tea which is known to be the best in St. Petersburg. The hotel also contains the Astoria Spa, with a 24hr gym, hair salon, treatment rooms, sauna and steam room. Guests can also use the swimming pool located at the adjacent Angleterre Hotel.

Of the three hotels we stayed at in St. Petersburg, this was my favourite. An elegant luxury hotel in a fantastic location.

Hotel Lilla Roberts – Helsinki
This hotel is a small boutique luxury offering, part of the Small Luxury Hotels of the World. Situated in the design district of Helsinki on a quiet street, the hotel is a short walk away from the hustle and bustle of downtown.

The hotel contains 130 rooms, all decorated with Art Deco furnishings. There is a work station and large armchair in the room, along with complimentary Wi-Fi. The bathrooms are also Art Deco inspired, with a separate shower.

The adjacent restaurant, Krog Roba, is available for breakfast, lunch and dinner, as well as evening drinks and the hotel lobby bar is a relaxing place to sit with friends. There is also a 24/7 fitness centre on site.

A funky hotel that’s gives a feeling of stepping back in time with its Art Deco styling, it’s a great choice for a stay in Helsinki.

St. Petersburg Attractions
St. Petersburg is a city rich with history, and its many palaces and cathedrals give it a real European feel. The Neva River running through the city made me feel like I was in Paris at times, and the many canals also made it feel like Venice.

During our stay we visited many of the cities attractions. The Peter and Paul Fortress & Cathedral had many functions over the years, it has been used as a military base, a jail, and the burial ground of the Russian Imperial family to name a few.

The Church of the Spilled Blood was built to honour Emperor Alexander II who was assassinated at its location. St Isaac’s Cathedral was originally the largest cathedral in Russia and is an impressive site in the skyline of St. Petersburg.

The State Hermitage Museum is the most popular attraction in St. Petersburg. Containing over 3 million items in the exhibit, it is one of the world’s largest museums. Yusopov Palace is the residence of the very wealthy Yusopov Family and is most famous for being the location of the assassination of Grigory Rasputin.

Helsinki Attractions
Helsinki is very easy to get around as the city is quite compact. There are trams throughout the city, similar to Melbourne, however most places can be reached by foot. With a laid-back atmosphere, the seaside city is known for its many bars and restaurants as well as shopping, architecture and culture.

Our visit included Senate Square, home to many gatherings celebrating the history of Finland, surrounded by amazing architecture. Temppeliaukio Church (Rock Church), built into natural bedrock, is one of Helsinki’s most popular attractions. A famous Helsinki landmark, the Sibelius Monument was built to honour Finland’s national composer.

Allas Sea Pool is a venue with many facilities including a sea pool, heated pool, saunas and restaurants. Flytour XD is a 4D simulator experience flying over and through the many sites of Helsinki.

A walking tour of Porvoo, a medieval city located approximately 50kms from Helsinki, an absolute must do.

To see and visit this Nordic part of the world in winter was something special……..I can’t wait to return and see how different everything looks during summer!