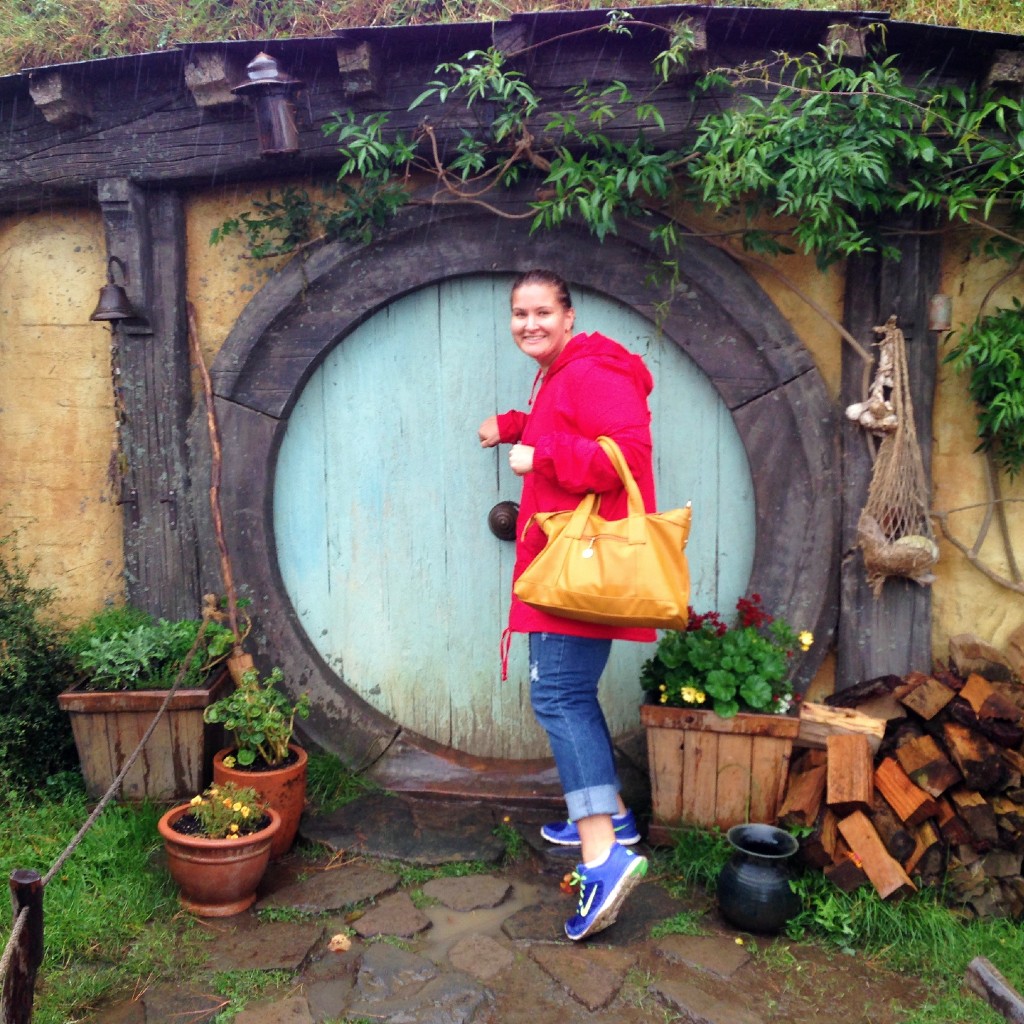 From one Shire to another

When Peter Jackson spotted the Alexander Farm during a search for the best possible locations to film The Lord of The Rings film trilogy, he immediately thought it was perfect for Hobbiton.

Flying out on the afternoon flight which is a 777, painted with the Dragon from the Hobbit, yeah we are going on the Hobbit plane!

The flight was great, good food, plenty of entertainment and great staff, even with a cyclone on its way there was very little turbulence. After a 40 minute taxi ride we arrived at the Rendezvous Grand Auckland where we will spend the next 2 nights.

Our plans for the Saturday were to take the Ferry to Waiheke Island. However with the weather report anticipating a cyclone, the whole of Auckland on lock down so we weren’t too confident that our plans would go ahead.

Up nice and early, and realising it wasn’t weather for a ferry ride, we decided to hire a car and head south to Hobbiton. The drive is approximately 2 hours, heading south towards Hamilton.

We drove into Matamata, where we parked and purchased tickets for the two- hour guided tour of Hobiton, adult tickets are $75 NZD and include the return bus transfer which includes commentary along the way.

Through this commentary, we learned why this location was chosen and how it was transformed into The Shire from Middle-Earth. When Peter Jackson spotted the Alexander Farm during an aerial search of the North Island for the best possible locations to film The Lord of The Rings film trilogy, he immediately thought it was perfect for Hobbiton. Nevertheless, a lot of work was still needed to be completed before it was up to the director’s high standards.

Site construction started in March 1999 and filming commenced in December that year, continuing for three months, a lot of work needed to be done to have it ready for the movies.

The New Zealand Army was contracted to build 1.5 km of road into the site and the initial set development. They brought diggers, bulldozers and other heavy machinery to the site.
Barberry hedges and trees were brought in and gardens were nurtured throughout winter.
Thirty-seven hobbit holes were created with untreated timber, ply and polystyrene.
The Mill and double arch bridge were built out of scaffolding, ply and polystyrene, then glued and painted. The thatch on the pub and mill was cut from rushes around the Alexander farm. The oak tree overlooking Bag End was cut down and brought in from near Matamata. Each branch was numbered and chopped, then transported and bolted together on top of Bag End (weighing 26 tonne). Artificial leaves were imported from Taiwan and individually wired onto the dead tree.
Generators were brought in to run the base camp and filming equipment. Logistics of power, water and sewerage all had to be considered. Catering was organised for up to 400 people a day, with three 2-course meals required for all of the cast and crew.

It is now a permanent attraction complete with hobbit holes, gardens, bridge, Mill and The Green Dragon™ Inn.

The tour was great, we were able to walk around each little hobbit hole, the vegetable gardens which are working and carefully taken care of daily.

We saw the famous hobbit hole of Bilbo with the green door. We stopped to dry off and try the home brewed ale and cider at The Green Dragon Inn. We took in the sites of The Mill and crossed the very well-known double arched bridge that was in all the movies.

I have never seen The Lord of the Rings movies, but am familiar with The Hobbit, even though we walked around in the rain for over 1 hour, it was still a fantastic day out, and really worth seeing. I’m really happy that we did this rather than spending the day in Auckland.

For anyone who is a fan of the books and movies, it is a MUST. I would suggest you pre book; we had to wait 30 minutes as we could not get on the first tour.

It was a lovely weekend but I was happy to get home to my Shire…..the Sutherland Shire.