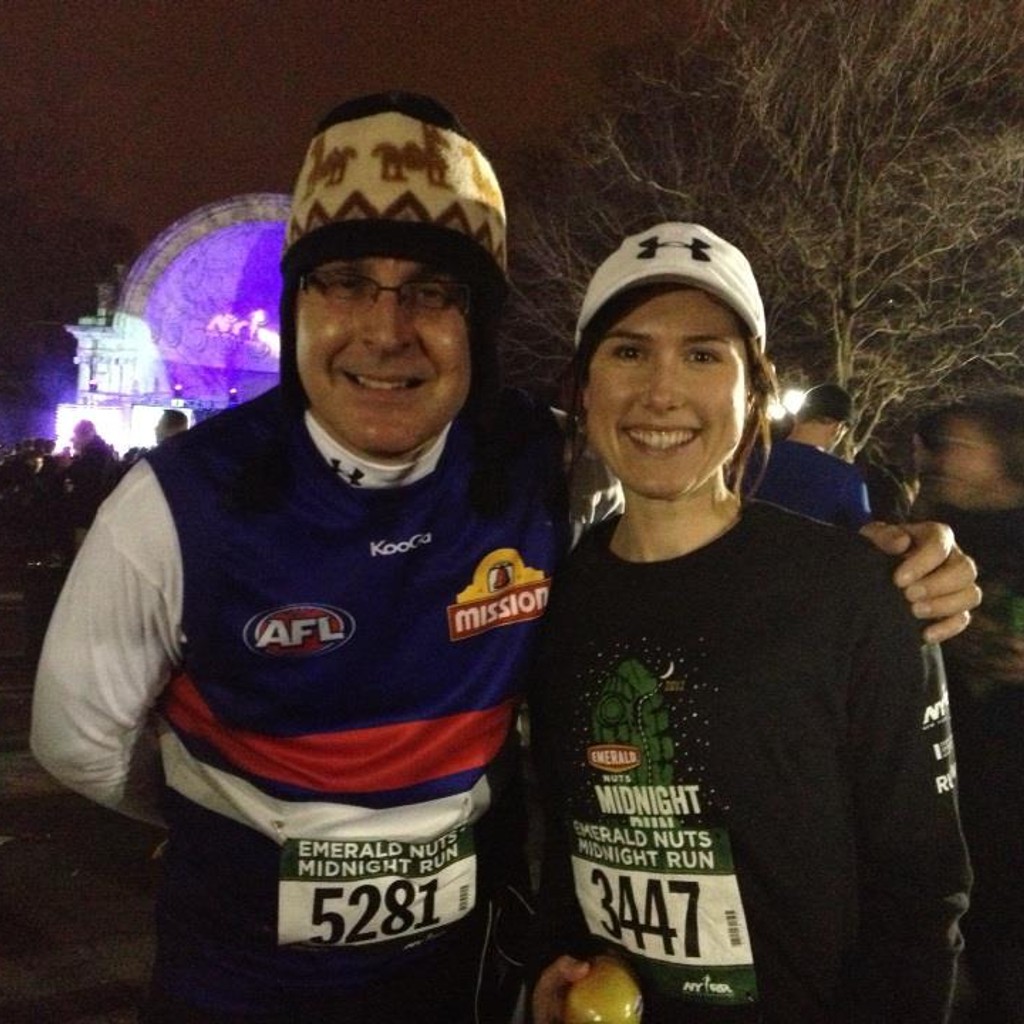 Can’t be far now. I remember reading the course notes and noticed that most of the last mile is downhill so I pick up the pace and ahead of me notice that the Smurf has stopped for a rest.

We start sprinting down the hill toward the noise and the lights, as we get closer chanting starts. 30, 29, 28. We push our way through the crowd and suddenly as we leap the fence it gets down to 3, 2, 1. We cross the start line amidst the deafening roar of fireworks, people screaming and hugging and get pushed in a sea of runners that are all heading into the darkness. I look across at Chelsea and yell out, “Wow, imagine an AFL Night Grand Final” just as a massive round of fireworks illuminates the sky.

The pace is fast, I mean seriously fast, last time I ran this fast a security guard at Western Oval was chasing me. I still feel bad about that as I think he tore a hamstring. It was worth it though, especially when you look closely at the pictures of Doug Hawkins being carried off on his last game and you see my hand on his arse.

For the first mile I stay with the group and am really proud of myself. Given it comprises of Chelsea (who despite being a goal umpire, has been secretly training for this with daily crossings of Brooklyn Bridge) her marathon running, wholefood eating friends and me, the old man. Central Park at this time of the year is so beautiful, the air is clear and crisp and the path is lined ten deep with well-wishers. Every chance I get I divert off my line and put up a high five. I feel like king of the world, dressed in several layers of fancy running gear proudly topped off by my bulldog’s jumper, which always keeps me one step ahead of the fashion police. Several times my mind drifts off and I imagine what would happen if I accidently turned off the path and in the morning the team from CSI New York discover yet another frozen bundle in Central Park. Or have visions of Hugh Jackman on a horse leaping across the path in front of me.

As I reach the half way mark I start to question what I am doing here. Three hours ago I was comfortably locked away in a pen at Broadway and 51st St with a million of my closest friends ready to welcome in the New Year by watching the ball drop in the traditional style. It was quite simple really; you stop drinking liquid around midday, stock your pockets with energy snacks and wait and wait in the sub zero temperatures. A few hours in we discovered that although we could see Times Square way off in the distance, there was no sound. That is correct; over 1,000,000 people are prepared to stand around for nine hours with no entertainment. WTF? I decided to take on the role of entertainment coordinator by playing and singing along to “We will never get back together” on the iPhone, which amused the crowd for about 30 seconds. Especially the way I sang “I hate you, we break up, you call me, I love you” with such conviction. Some Kiwi’s then donated “Better be home soon” which got us all huggy for a while but I knew it was over when a bunch of Koreans started playing Psy’s lesser known works. After climbing the worlds largest sand dune and completing the Inca Trail for recent New Year’s Eve’s this was threatening to become a real flop.

Suddenly I remembered Chelsea’s invitation to join her on the Emerald Nuts Midnight Run in Central Park. “It’s a really easy run just for fun, not competitive at all” were her exact words. I looked at my watch and had just enough time to get across town register and line up at Strawberry Fields for the start. I managed to register as runner number 5281 only minutes before closing but almost didn’t make it to the start when I got caught on a downtown train and emerged in the middle of a pen at 48th St, 20 blocks in the wrong direction. One of New York’s finest took one look at my outfit, wished me luck and waived me through the barriers and I ran the 20 blocks, dodging strange looks and weaving between drunk partygoers in 2013 glasses and giant Nivea Uncle Sam hats. Hardly the right preparation for a run with my mind racing – torn between finding my way and wondering what giant furry hats have to do with skin care.

Approaching the half way mark of the run, I’m really starting to struggle. In the first mile I feel like I’m passing people but the trend is reversing and I know I’m in trouble when I get passed by a smurf who looks to be doing it easy. It was hard to tell though as his expression never changed. He ignored me as I yelled out at him to slow down, as it was only a fun run! Clearly nobody told the smurf! I pull over for a breather at the drink station, plug some music in and resolve to catch the smurf. Ahead I see him pause at the cider stand (smart arse) and disappear around the next bend.

In plugging in the music I’ve somehow selected my daughters trash metal mix and some idiots screaming at me. Determined not to stop again I remember back to the time I wandered into the Panamanian Presidents compound and was chased by his machine gun toting bodyguard down a jungle path, the same screaming only in Spanish. No Karsten, you need to relax, get in the moment. Think of something positive, like Katie Holmes smiling at you yesterday, now that was a New York moment.

The clock says 00:30, that means I’ve been running for nearly half an hour. Can’t be far now. I remember reading the course notes and noticed that most of the last mile is downhill so I pick up the pace and ahead of me notice that the Smurf has stopped for a rest. I attempt to high five him but clip the back of his head by mistake, poor thing he looks stuffed. The last few hundred yards seem to go on forever, my music’s gone instrumental, spectators are yelling some thing out that sounds like a marketing slogan. I think it was “Every person counts” and I try to high five anything that is not moving but don’t connect once. In the final straight I look for someone holding a flag, anyone would do just like in the movies – so I can cross the line holding it above my head but to no avail, instead I raise my arms which won’t go above my shoulders and end up looking like a goose.

I look up my time is 39:40 and look behind me to see the smurf shuffling down the hill with Santa Claus, Superman and Catwoman. At least he is amongst friends.

Somebody thrusts a bagel, an apple and a bag of nuts in my direction and that’s it. All over, no fanfare. Yeah um that was fun!

24 Hours later I sat in front of a Seth Godin lecture and this is what he said.

“Your art is vitally important, and what makes it art is that it is personal, important and fraught with the whiff of failure. This is precisely why it’s scarce and thus valuable—it’s difficult to stand up and own it and say, “here, I made this.”

This is my art.
4 Miles
40 Minutes
48 Years of preparation