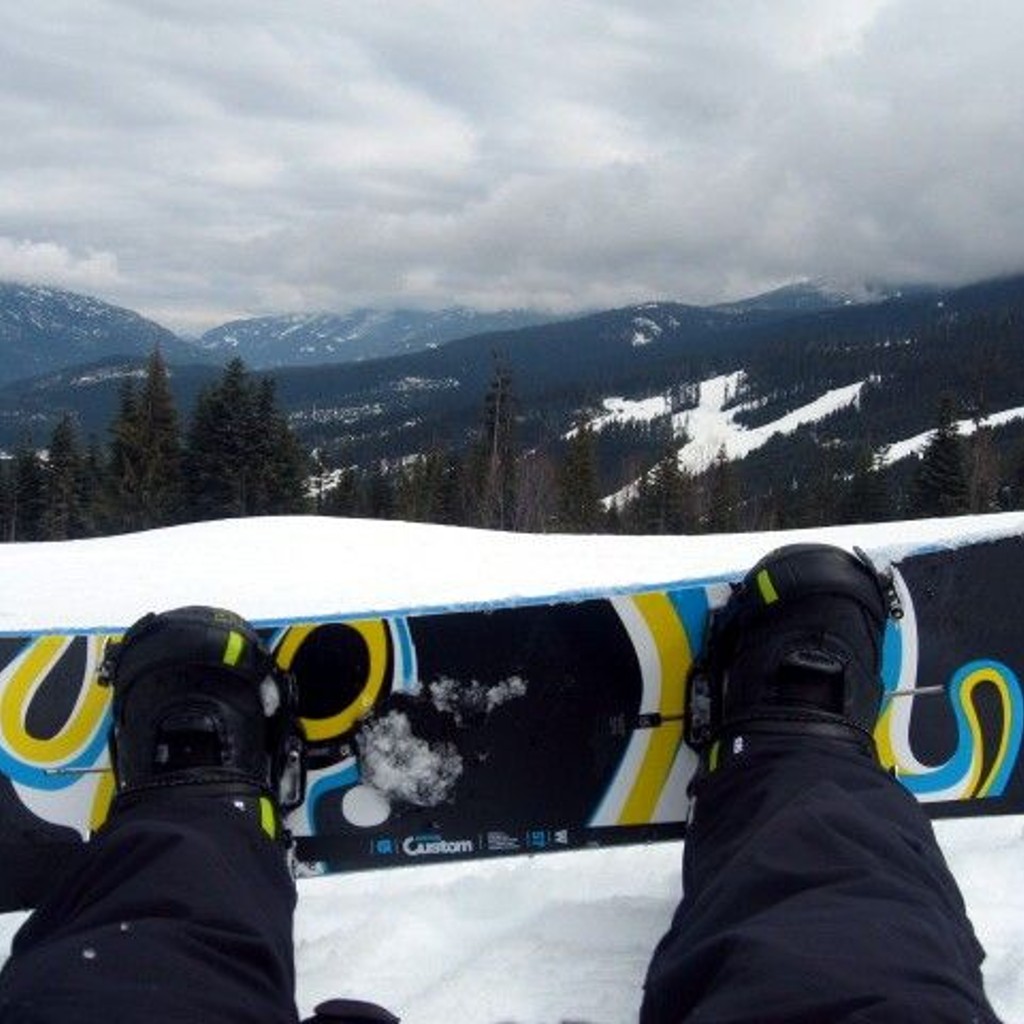 The crowd is dotted with a number of incredibly skilled individuals who have developed a method of carrying their boards or skis, drink a Starbucks skinny latte and talk on the mobile phone at the same time.

I look down at my brand new Burton snowboard the bright yellow swirling graphics shining, almost daring me to cause the first inevitable blemish. The revolutionary EST bindings, with leather toecaps look like mini Ferraris lined up on the starting grid, except the front one is on a funny angle!

I look up and way off in the distance I see Blackcomb Peak, still another couple of lift rides and a T-bar away. On the chair ahead of me are my skiing buddies excitedly chatting away, being the only boarder I’m alone on the lift as we are considered a danger to inexperienced skiers but you know I don’t care I’ve got my ipod and it’s playing one of my favourite songs Big Time by country rockers Big and Rich. Just don’t tell the boarders on the chair behind me with their pants hanging halfway down their arse; they would assume I’m listening to Black Swade or De La Soul.

Soon I reach the top, raise the restraining device, hold up the group as they wait for me to strap in and make some quick adjustments. I take in the incredible view below us and before I know it we are tearing down Buzz Cut, into Espresso and finally across to Shorthorn and home! Sweating profusely, heart pounding I look down at my new toy, brush the snow away and am pleased to see that the couple of stacks that I didn’t mention have left no marks. My legs are sore, toes are throbbing but hey nothing that a sleeve of Kokanee at the Longhorn Saloon won’t fix.

Welcome to Whistler – the largest mountain resort in North America!

I am in Whistler for the week with a group of travel agents, we are being hosted by Ski Express, arguably Australia’s best ski wholesaler and flew here by Air New Zealand, great airline, new aircraft and a real quick way to get to Vancouver! Whistler Tourism is also spoiling us rotten. During our time here we have inspected 12 different properties, several shouting us breakfast, lunch or dinner. It’s hard to pick my favourite as they all have different offerings to cover every demographic – I guess for me the nearest to the slopes would be my choice every time.

Visiting Whistler is all about having a big time, initially the village seems enormous and confusing, Upper Village, Lower Village, Blackcomb, Whistler etc. Soon however it comes together and you can get around quite easily, a free shuttle bus links the community very efficiently. Once you get your bearings you then decide what to do, great shopping, brilliant restaurants (we never had a bad meal) and parties galore! We are here during the Telus World Ski and Snowboard festival, every minute of every day there is something on. You can ride the bucking Schick razor, spin the wheel and get your photo with a cute Kokanee hostess or sample numerous energy drinks. All this to the beat of some of Canada’s best bands, there seems to be a stage on every corner. On Sunday it gets ever bigger as Michael Franti will close the festival which was opened by John Butler Trio earlier in the week, apparently the show went off with Aussies running around everywhere draped in flags their faces painted in the green and gold!

The atmosphere is incredible, the diversity of characters parading in the streets make people watching a major pastime. There are the Japanese in their bright ski gear taking photos of their bright ski gear, boarders trying to out grunge each other with their hoodies up and pants down. The bars and restaurants have boards and skis parked out the front; I guess they are the pick-ups of the mountains. The crowd is dotted with a number of incredibly skilled individuals who have developed a method of carrying their boards or skis, drink a Starbucks skinny latte and talk on the mobile phone at the same time. Maybe it is going to be an Olympic event when Whistler hosts the 2010 winter games!

The winter games are big news in Whistler; you can buy $80 polartec sweatshirts in all the shops or Quatchi, Miga or Sumi keyrings. Someone told me that Quatchi is an abominable snowman, anyway I didn’t meet him – as for Miga and Sumi I guess they are bears or beavers – who knows! Apart from rebuilding the road from Vancouver which is a massive investment in itself, Whistler is constructing a new gondola between the two mountains, apparently at four miles long it is the worlds longest span, I hear it will have a glass floor – scary stuff!

Speaking of scary stuff, the other day we did a Ziptrek Tour in the foothills of Whistler Mountain. Cathie, a local lady big on excitement and enthusiasm for the environment, took care of us. Whilst zipping between the treetops she also led us on an interpretive educational adventure. Maybe to keep our minds off the 100 metre drop below or the 1000 metres of line ahead of us she asked us to consider the big picture and reminded us the damage that man has done to this earth during our short tenure on the planet. Each time we were clipped on to the line and pushed into the chasm ahead we only had a few seconds to feel guilty as our minds were too busy taking in the rampaging rapids below us which whizzed past at 80kmh. At some stage on the tour we learned all about bears hibernating but mixed amongst that were instructions on how to do the final zip line hands free – ok fair enough I tried that. Some of the others however were taught to do it upside down – seriously what’s going on there, wasn’t this whole exercise scary enough, anyway I’d had salmon for lunch and wasn’t prepared to drop it back in the river!

Many years ago in the southern highlands of Chile I learned that salmon is the elixir of life and I eat it whenever I can, anything to hold back the fast encroaching middle age! We met a man who must be related to John West, at 71, well past his middle age he can out ski the best of us and given that he has lived in Whistler every season since it opened in 1965, I guess he should be pretty good by now. Dennis was our guide for two full days; during this time he took us to areas of the two mountains that we would never have found on our own. The wide-open expanses of Symphony Amphitheatre, way above the tree line, just a single express chair up but dozens of ways to descend. Or Harmony Ridge, one false move and you are condemned to one of the gun barrel straight seemingly vertical black runs. Our favourite area and the best snow was 7th Heaven on Blackcomb Glacier, it took a steep T-bar to get there but the run down Upper Panorama was spectacular with the sun shining on Whistler Mountain opposite providing a dramatic backdrop. Over a mountain top lunch consisting of a salmon sandwich and cranberry juice Dennis entertained us with stories of his charmed retirement. For the last 16 years he has divided his time between his apartment in Whistler, yacht in Vancouver, beach house in Hawaii and overseas trips – no one ever thought to ask him what he did! Then again it is what he is doing now that counts, guiding guests in return for a free lift ticket and meeting interesting people, probably commutes to “work” on a snowmobile too!

Are snowmobile drivers the bikies of the winter world or did they just make us get into the giant bulky black outfits and motorcycle helmets for their own amusement? Either way, here we were all geared up ready for a snowmobile adventure – for some reason I thought we would just jump on the back and get a commentary tour of the countryside. Hell no, we got to drive the buggers – 5 minutes of basic instruction and we were let loose tearing through the wilderness, up the mountainside, burning around corners, did circle work on a frozen lake and even a couple of jumps. It was unexpectedly one of the most fun things I have done; by the end we were racing neck and neck reaching speeds of up to 46kph. It was a true Canadian adventure, out there in the wilderness; pine trees heavy with snow, big mountains filled every horizon.

I slowly exhale, push my shoulders back in the seat, stretch my weary legs, eagerly open the unread Jeffery Archer hardback that I dragged halfway across the world, take a quick sip of a free sample energy drink, plug in my ipod and settle in for the two hour coach ride back to Vancouver. As we leave the village and hit the highway I take a quick glance back for a final look up at the slopes of Blackcomb but it’s too late, already the view has been obscured by yet another flurry of fresh powder snow!