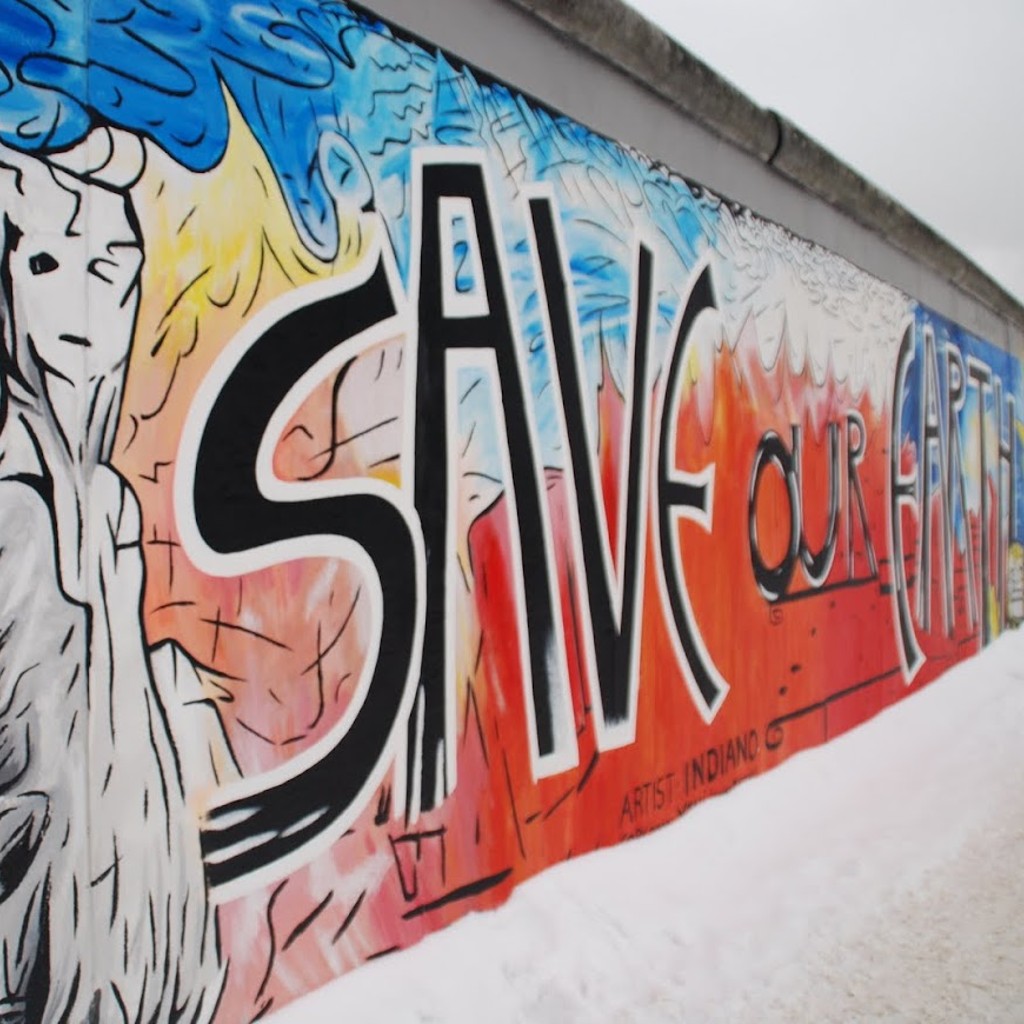 The sight of so many Russian uniforms did not surprise us anymore, we did not get excited either, we kept away from the noisy street and quietly played by ourselves in the corner of the living room.

We couldn’t really see much, just a bit of rough brown overcoat and big, long black boots covered partly with melting snow. The Russian soldier seemed quiet friendly; he even smiled at Mutti when he spoke. My sister and I did not dare to move; instead we sat very still and watched as the snow slowly melted leaving the man standing in little puddles of dirty water. We didn’t want to but couldn’t help it, suddenly we started to giggle.

I looked up from my reading when a strong American accent yelled out my name. I wandered up to the counter grabbed my hot steaming Starbucks mug and returned to the couch. I glanced out the window amused by the tourists slipping and sliding on icy Friedrichstra? working the angles trying to get a photo of themselves in front of the “You are now leaving the American sector” sign without being run over.

The sight of so many Russian uniforms did not surprise us anymore, we did not get excited either, we kept away from the noisy street and quietly played by ourselves in the corner of the living room, the only warm room of the house. Papa was getting restless staying indoors for days on end. His office in town was closed, there was chaos on the streets, the shops did not sell much, because the shelves were empty. One day Papa decided to go to town to try and find some food.

Looking at my watch I suddenly realised that we were going to be late for our tour; before rushing out the door I quickly scoffed the rest of my New York cheesecake and sculled the remains of my coffee. It was bitterly cold outside, the ground was covered in deep snow but I had a warm scarf a thick Burton jacket and snowboard gloves on so I really didn’t notice.

Turning the key there was a slight splutter but then quickly the tiny two stroke engine sprung to life, I pressed down hard on the accelerator and slowly we moved forward, slipping slightly on the fresh snow. Now it was time to change gear, only 5 minutes earlier I had been given specific instructions but already I had forgotten them. Ok here goes, clutch in, push the leaver up – cool that worked now we were on the street and moving at a rapid 20kh. Michaela’s crackling voice came through the radio – “Ok Karsten now off we go, on the left you will see the high-rise of Potzdammer Platz, until only a few years ago there was…”

I am on a Trabi Safari; several years ago an entrepreneurial Berliner came up with the idea of restoring some Trabants and providing tours of the city in a self drive convoy. The Trabant or Trabi is an iconic car that was built in East Germany from 1957-1989, due to the high price of steel the outer body of the car was made of durplast, a form of plastic containing resin strengthened by wool or cotton. Over 3 million Trabis were produced however East Germans had to wait up to 15 years for a new one, subsequently they became very careful with them and kept them in perfect condition. The average lifespan of a Trabi was 28 years.

We were on a brand new tour which celebrated 20 years since the wall came down. The “Wall Ride” is designed as a mission through the heart of East Berlin. They kit you out in Russian hats, serve you tea from a samovar and welcome you with bread and salt. During the drive you are regaled with stories of escape. “Pull over here, see that house number 60 with the blue door, well from that house they dug a tunnel under where we are standing, imagine the wall ran along this street, they came up over by the traffic lights, now let me tell you how they hid the dirt…”

Traffic lights in the former GDR have become a cultural icon; the Appelmann with his distinctive hat and outstretched arms is often the only clue as to whether you are in the East or West. Not long after the wall came down, the German authorities attempted to westernise the traffic signals and were met with strong resistance. Now twenty years on you can go to the Appelmann website to purchase your distinctive green or red handbag, mouse pad or key ring.

In 1989 as the wind of change swept through Berlin there was a strong movement that wanted to eradicate all memories of the once divided city. You have to look closely to find the former border, the snow covered roads hide a twin row of stones embedded in the street as a memorial, the drab architecture should be a clue but very quickly whole districts are being rebuilt or at the very least getting a touch of colour.

There is one place where over 1km of the wall has been turned into the longest open air gallery in the world. East Side Gallery is one of the few stretches of wall that hasn’t been chopped up mounted on perspex and sold for 5 euro in a tacky souvenir shop. This original stretch of the wall was painted in 1990 by 118 artists from 21 countries and is a significant document of the political changes that occurred during that period.

Papa looked up at us but quickly averted his eyes, we hardly recognised him, he looked such a mess, his clothes were torn, his gold rimmed glasses were gone – how can he see without them? He tried to smile but only managed a lopsided grin, a Russian soldier noticed it and hit him hard across the face, poor Papa nearly collapsed but was helped up by my brothers. Mutti screamed, I held tightly on to her apron and through the tears we watched the pathetic group of prisoners disappear out of view.

You get the impression that Berliners are now starting to realise that they may have moved on too fast to eradicate a terrible chapter in the history of the city. GDR kitsch is celebrated and replicated in bars, theme hotels and countless souvenir shops. Socialist architecture is back in vogue and there is even a rumour that an electric version of the Trabant will be released soon. Every piece of the wall that is still standing has been turned into a piece of art. Berlin is a hub of creativity, rent is relatively cheap, there is plenty of space and there are over 400 galleries for artists to exhibit their work.

Musically Berlin has come a long way too, we all remember the haunting sounds of The Scorpions with their “Winds of Change” or chuckle to ourselves as we remember The Hoff standing in front of Brandenburg Gate singing “Looking for Freedom”. I say chuckle to ourselves as the German’s take David Hasselhoff seriously, very seriously. I met Jerome, a trainer for a company that makes high quality engraved pens, a job he takes seriously along with his music. He’s still getting his head around my idea of turning the recently closed Art Deco wonder that is Tempelhof Airport into a Temple of worship…for The Hoff!! Despite my reluctance Jerome insisted I take home 3GB worth of quality German rock music. Amongst the rubble of Rammstein and Milli Vanilli I discovered a gem in a Berlin trio called The Baseballs, a band that has recreated the sounds of the 50’s by doing cover versions of current hits. You haven’t lived until you hear The Baseballs singing Rihanna’s “Umbrella” as Elvis.

Several years ago I took my mother to the premiere of “Goodbye Lenin”, a comedy about a son who tries to hide the collapse of the wall from his bedridden mother who is a strong party activist. My mum had a pretty good sense of humour for a German but just didn’t get the joke in the movie; to her it was a stark reminder of her childhood. Last year when my mother passed away, I promised myself that one day I would visit the city that played an important role in her upbringing.

Settling in to a first class compartment as the DB ICE train smoothly pulled out of Berlin’s sparkling new ultra modern Hauptbahnof, I took one last look at the snow covered glass dome of the Reichstag and imagined what life in Germany must have been like for her generation. I continued reading the short story titled “The Russians are coming” that I recently discovered amongst my mother’s belongings. Her childhood memories were penned in 1989, only weeks before the wall came down. They provided a chapter of our family history that until now remained unanswered.

Forty two years later the Red Cross informed us that Papa was suspected of being a Nazi criminal, put on a train to Siberia but never made it. His frail delicate body could not stand the cold and disease; he died of starvation and typhus fever. He suffered the same fate as thousands of Germans before him; his frozen body was thrown out of a moving wagon to litter the silent frozen Russian countryside. A soft deep carpet was his grave.