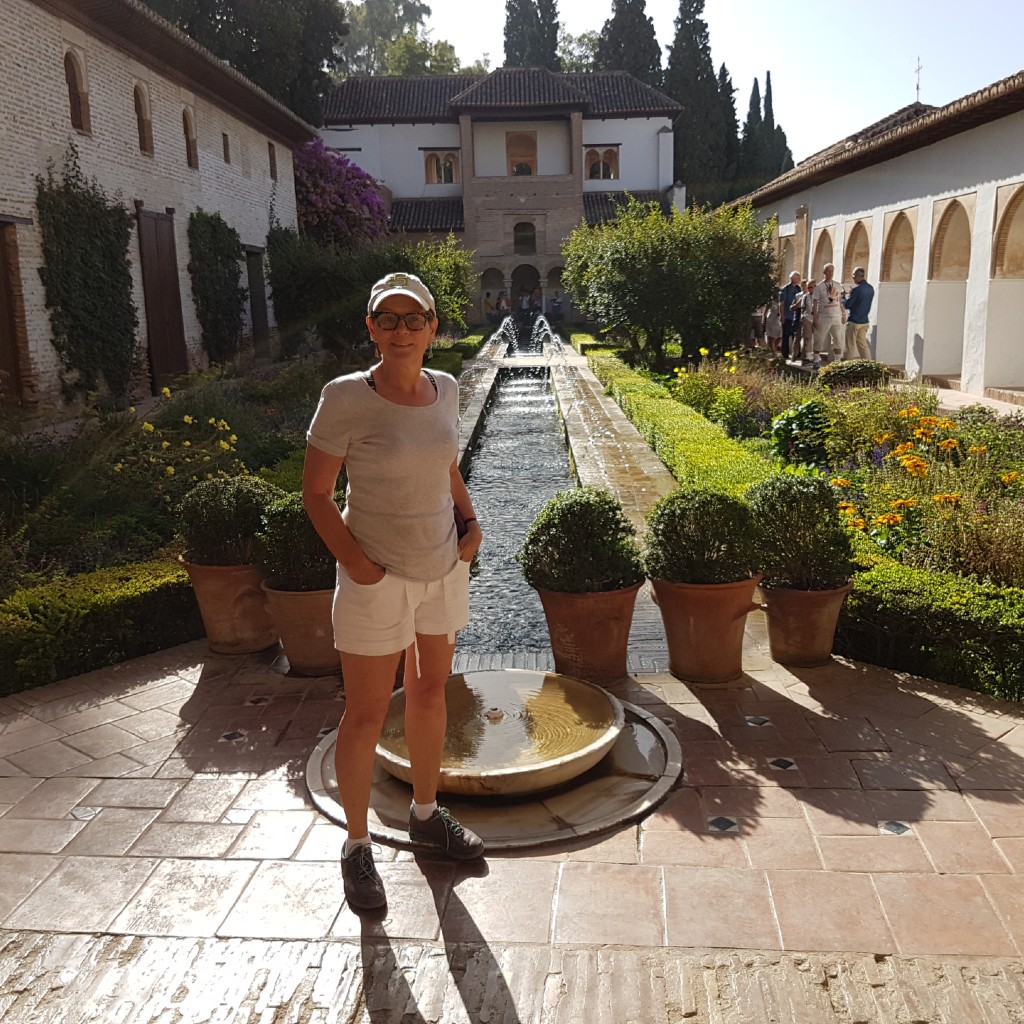 Andalusia at its best

October is the perfect time to travel to Andalusia, the southern part of Spain. The weather was perfect, high twenties every day and the most beautiful blue skies. The people are beautiful, very friendly.

I was the very lucky person to win two business class flights to anywhere in the world with Etihad Airlines….so first of all I must say a great big thank you to Etihad, who got us to Spain in style!! Business class with Etihad is fabulous the lie flat beds were very comfortable and the crew were amazing. They knew when to attend to you and when to leave you alone. Flying business class came with the privilege of access to the new business class lounge in Melbourne…WOW, out of this world, absolutely amazing!! It really is worthwhile going early and totally relax and enjoy the lounge.

October is the perfect time to travel to Andalusia, the southern part of Spain. The weather was perfect, high twenties every day and the most beautiful blue skies. The people are beautiful, very friendly, however there is very little English spoken. We travelled everywhere by train, the train system is perfect and security is very good.

Our first top was Seville, beautiful old city with lots of little streets and pathways. We stayed in a beautiful apartment in the Triana District which is bustling at night and is walking distance to the old city.

On our first night we went to a Flamenco show at the Museo del Baile Flamenco. It was a special show for only a small group which was wonderful, you could see everything! It is so important to see all the moves and the rhythm.

We spent the following day exploring Seville. Through all the gorgeous little streets with lots of beautiful eateries. We walked through the beautiful Parque de Maria Luisa to get to the impressive Plaza de Espagna.

The next day we got up really early to be one of the first ones in line to go to The Alcazar of Seville. This is a royal palace, originally owned by Moorish Muslim Kings. It is an absolutely amazing place with beautiful gardens, the Moroccan and Arab influence shows throughout. The Palace is a very busy place and the queues are usually enormous, which is why we got there early! We managed to find the Jewish Quarter, there are no synagogues left in Seville as they have all been turned into churches, we found the same throughout Andalusia.

Travelling by train through hundreds of beautifully manicured olive groves was amazing, and olives do taste different in Spain…we loved them!!

Ronda is a beautiful quaint little mountaintop city that is set above a deep gorge. One of the attractions in Ronda is the medieval Arab Bridge, which connects two big rocks with an enormous drop, it is beautifully lit at night.

We stayed at the Parador de Ronda which stunning views. I can just imagine in spring time, when it is beautifully green everywhere. The hotel is in an old town hall, the interior is beautifully decorated.

We did manage a good hike. Down to the bottom of the gorge and back up again. I am sure there are lots of good hiking opportunities. Also Ronda, like so many other cities in Spain, has a legendary old bullring.

Granada was our next stop. The train goes as far as Antequerra St Ana and then you get transferred to a special bus, all part of the train ticket. The bus is very comfortable and there is space for luggage.

In Granada we stayed in a cave apartment called Cuevas El Abanico.

This was such an experience. We took a taxi from the train station, as far as we could and then we had to walk over the cobblestones up a very steep hill – not easy with luggage but it was worth it! It was a great setup; the sleeping area was in the cave. The hotel had great views. It was quiet and there were not many tourists around. The location is good if you don’t mind a 15-minute walk into town and only 10 minutes to The Alhambra.

We had not prepaid for tickets for Alhambra as yet, that would have been too easy. We were still will be able to get in, but needed to line up at least 2 hours prior to opening….the Alhambra hours are 0830hrs & 1430hrs. The alternative to both those options is go to the information centre, where people go to get their tickets if they have booked online and hope for cancelled tickets. We were two very lucky people and got tickets for the following day, no need to line up for 2 hours!

We went to the local supermarket and the local bakery, what a great idea, enough for a nice supper and breakfast and lunch to have at The Alhambra gardens.

Our ticket for The Alhambra was for 9.30am, you must be on time if you are running late, you will not be let in. The ticket also included entry to The Palacio de Generalife, again you have to be careful because you get given a time when the entrance expires.

The grounds The Alhambra Gardens are absolutely stunning, so easy to spend the day there and just find yourself a spot and relax and take it all in. The history of The Alhambra is amazing, imagine just a few years ago, it was a derelict place and now it is Unesco Heritage listed. If you do have time it is also a beautiful place to go for a walk at night time it is very well lit up.

Had a wonderful meal that night, a Moroccan Tajine. The Moroccan influence is amazing, it was all around us, in the streets and buildings with all the mosaic tiling…and the meals!!

Then of to our last stop in Andalusia, Cordoba.

Back on the bus to Antequerra St Ana to connect with the train, in Cordoba we stayed in a beautiful apartment in San Fernando street the old city which had easy access to everything. Cordoba is another old city with lots of little streets and eateries and it is nice to walk cross the old Roma bridge and walk along the river, there is lots of street art.

We had an early start the next day to go to Mezquita de Cordoba which is a cathedral within a mosque. WOW. Stunning place. I was totally blown away by the beauty and the overwhelming mixture of two religions, Catholicism and Islam, couldn’t get enough of it!!

It was really nice to finish of our visit to Andalusia with Cordoba, I had no idea what to expect and it left me with great memories full of Moroccan influence.

Spain is a country with lots of regions, lots of conflicting identities, like Galicia with its capital Santiago de Compostella; Catalonia with its capital Barcelona; historic region of Castile around the capitol of Madrid; Valencia and Murcia region.

So much more to explore.