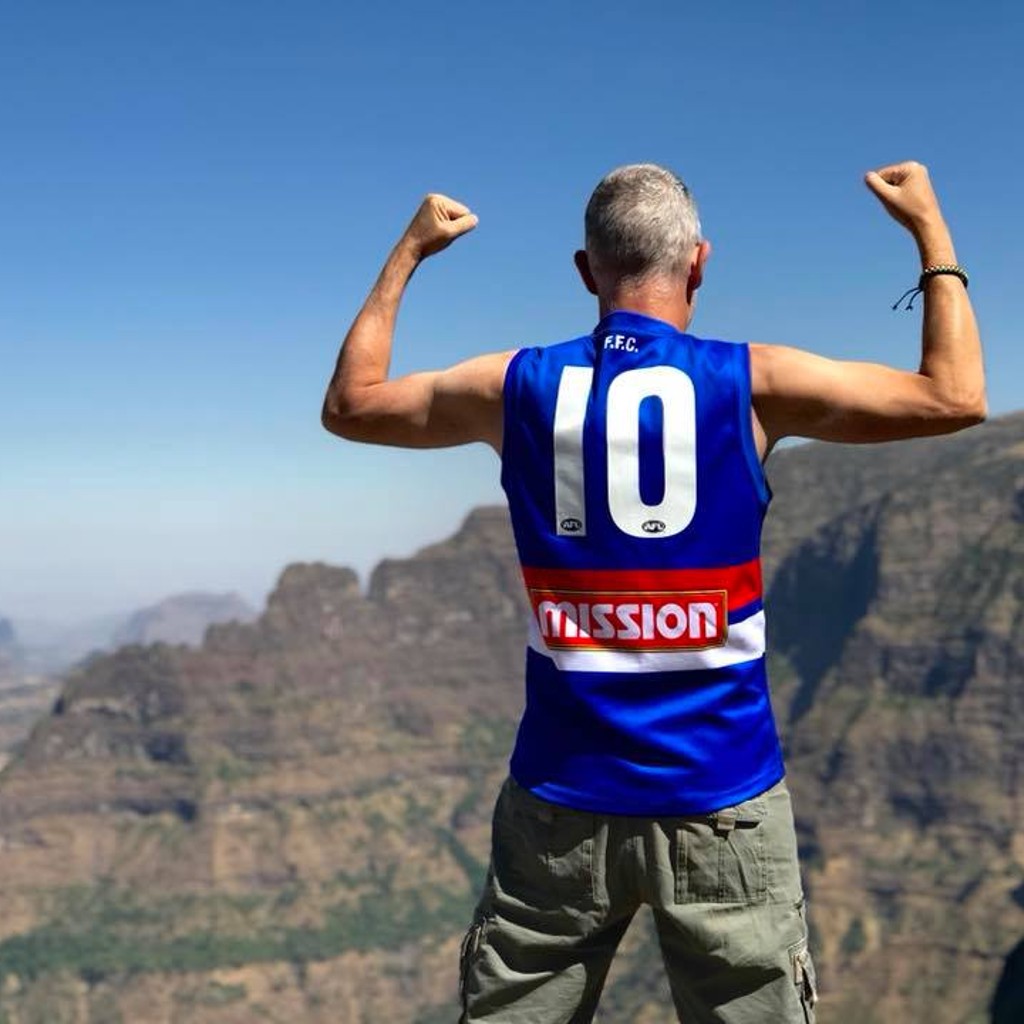 Several gates mark the entrance to the ancient city, at each gate traders compete to sell fruits, vegetables, coffee and the ubiquitous khat. Virtually the entire population of Harar is on khat.

A young boy, barefoot in an old Arsenal shirt and grubby, dusty shorts stands with his goat. He has walked over the hills and across the high plains for many days, hoping to sell his companion for a good price so he can make his family proud. Behind him is the shell of a giant football stadium, being constructed by the Chinese, it will house 60,000 fans and cost over a US$100m. In the shadow of the giant dome, goat herders huddle together not prepared for the unseasonal cold snap. A few months ago, a giant gas explosion rocked the construction site, a dozen were killed however it never made the press, not that the goat herders were able to read anyway.
We weaved our way through the goat market, waved to the herders and received enthusiastic waves and big smiles in response. Further along the road the contrast of old and new evaporated and the hustle and bustle and chaos of one of Africa’s largest cities soon engulfed us. Blue and white rusty Peugeot taxis that were at least 50 years old, competed for space with trucks, minibuses and pedestrians with no apparent right of way. Aiming for a renowned coffee shop we attempted to cross the busy road just as a kid grabbed my arm and yelled something incoherent in my ear, annoyed, I pushed him away and continued to the other side. Instinctively I felt for my iPhone in my pocket and it was gone, last I saw of it was the kid with the afro and his accomplice merging into the crowd.
Welcome to Addis Ababa, the capital of Ethiopia!

Addis Ababa is a big city with all the usual big city issues, however, other than pick pockets in several districts, crime is virtually non-existent. This is evidenced by the lack of police on the streets, even their HQ was an unmarked non-descript building with around half a dozen officers, their only ammunition an antique broken typewriter and a pile of carbon paper.

You soon learn in Ethiopia that their history runs deep, and Addis has its fair share of impressive museums, so when you are standing in the bowels of the National Museum staring at “Lucy”, a 3.2-million-year-old fossil, suddenly many aspects of the city start to look decidedly modern. The Ethnological Museum, which is in the grounds of the university, is one of the best I have ever seen. Initially you are welcomed by a tortoise who has been there through the fall of the kingdom, the rise of communism and the move to democracy. As you enter the building you are reminded by the young student guide that this is the former residential palace of Emperor Haile Selassie, the stuffed lion at the top of the stairs, with the creepy glass eyes, was a pet of the Emperor. The lion has long been the symbol of Ethiopia, it represents strength, kinship and pride, originating with the Hebrew tribe of Judah and is a now a prominent symbol of the Rastafarian movement.

Throughout Ethiopia we came across the legend of Haile Selassie, we stood in his bathroom, showed respect at his grave, accidently showed a lack of respect by sitting on his throne in a church and ran around practicing the Rastafarian greeting “Jah Haile Selassie”. Haile Selassie was Emperor of Ethiopia from 1930-1974, known globally as both an extraordinary and controversial leader who ensured that Ethiopia was the only African nation not to be colonised. His life ended ingloriously as he was murdered by the communists in 1975 and buried beneath a toilet block in his own palace.

The Rastafarian movement revere Haile Selassie as the messiah who “will lead a future golden age of eternal peace, righteousness, and prosperity”. It is believed that he was a descendant of King Solomon and the Queen of Sheba, a dynasty that lasted over 3,000 years – the longest in history.

Arriving in the town of Harar in Eastern Ethiopia is like stepping back into biblical times. It is a world heritage listed walled city that dates back to the 14th century, it has over 100 mosques and is considered the 4th Holy City of Islam. Harar is also famous for the hyenas who come in at night and clean the streets, given the overall cleanliness around us, this system seemed to be pretty effective.

Several gates mark the entrance to the ancient city, at each gate traders compete to sell fruits, vegetables, coffee and the ubiquitous khat. Virtually the entire population of Harar is on khat, a plant whose stem tips are chewed for their stimulating effect. Subsequently the locals are on a sustained high and are very friendly, constantly laughing and really keen to be photographed. Very few tourists venture out this way, so the women are keen to show off their amazing brightly coloured wraps whilst the boys just want a selfie. Once inside the old city the chaos subsides, replaced by steep, narrow cobbled streets, each house painted brighter than its neighbor. Occasionally a small child will pop their head around a corner, smiling and waving, I joined in a game of soccer with a few young boys, eventually succumbing to the altitude which can wipe you out quickly.

Ethiopia is known as “The Roof of Africa” as most of the country is above 2400m, this makes for a comfortable temperate climate throughout the year. It is only once you are in the Simeon Mountains that you really appreciate how high you are. The peaks rise up to 4500m however the mountains are dramatic in that you are not surrounded by them, you are on top of them, looking down into the gorges, gullies and rock formations. For several hours we walked along the cliff edges, stopping to watch the gelato monkeys cavorting all around us. These majestic creatures were pretty much oblivious to our presence, although I suspect the younger monkeys were showing off.

Outside the national park we came across a group of children who were waiting patiently for us, they greeted Sue, our tour leader like she was a rock star. We had no idea what the excitement was about until Sue reached into her backpack and pulled out an envelope containing photos of the children that she had taken several weeks earlier. For many of these children it is the only picture they will ever have of themselves. On a recent stop a young mother accompanied the children, desperate to collect a photo of her only child who had died a few days prior. Sue, an Englishwoman who has lived in Ethiopia for 17 years, is an incredible individual who spreads her love of the people of Ethiopia in so many ways. At every village, roadblock, restaurant or local shop Sue would motivate, enthuse, respect and provide hope to individuals. It was like being in the presence of a modern-day Jesus, her simple caring gestures drew everyone in.

Christianity is a big deal in Ethiopia and dates back to 330AD, so there is a diverse range of places of worship. At Bahar Dar we visited two circular churches that dated back to medieval times, both with bright and colourful murals that coated the entire ceiling and walls. Don’t get me wrong, they were fascinating, but when the local guide describes every painting in detail, relating it back to a scripture in the bible I tend to tune out. I amused myself by making up modern day stories to match the paintings, which I respectfully kept to myself.

At Axum we marveled at giant obelisks known as “stelae” which dated back to the 4th century. The industrious locals carved cool miniature versions that made for nice keyring souvenirs, for an extra dollar they’d even scratch a personal message on the back.

We also visited the tomb of King Balthazar, one of the three wise men. Carved deep into the rock, the chamber was cool and surprisingly smelt fresh. At one stage I quietly moved into one of the antechambers and meditated for a few minutes, only spoiling my own solitude when I couldn’t resist a selfie and the flash went off.

Axum claims to be the resting place of the sacred Ark of Covenant, it is kept strictly under wraps and apparently only one living person, the guardian, has ever seen it. It’s quite incredible that one of the most important documents in the history of mankind is sitting in a small church in Ethiopia guarded by one man. Then again, back in Addis Ababa we found a dusty Sydney 2000 Olympic Gold Medal, sitting amongst ancient scriptures in a tiny museum behind a church.

Further south in Lalibela we explored Ethiopia’s best-known attractions, the medieval rock cut churches. Deemed the “New Jerusalem”, the complex of 11 churches were believed to be built over 800 years ago. These churches took 40,000 people with chisels over 27 years to build. That’s a fair level of commitment.

Compared to the rest of Ethiopia, Lalibela has a large number of tourists, so the best way to get away is to ride a mule up a mountain. After inspecting the mules to ensure they were well looked after, together with our muleteer, we slowly climbed up the steep mountainside and away from the town. As we passed through villages, children came out and waived greeting us with “Salam Neh” which by now I’d worked out meant hello. We bought several primitive stone carvings to spread some love and happiness which ensured their masonry skills would survive another generation.

From the top, way off in the distance, was the town of Lalibela and beyond that were brown and dusty hills that continued as far as the eye could see.

I sat down on a rock, looked up at the sky and said a word that I’d been struggling with from day one. It was Amaseganalehu – Thank you!