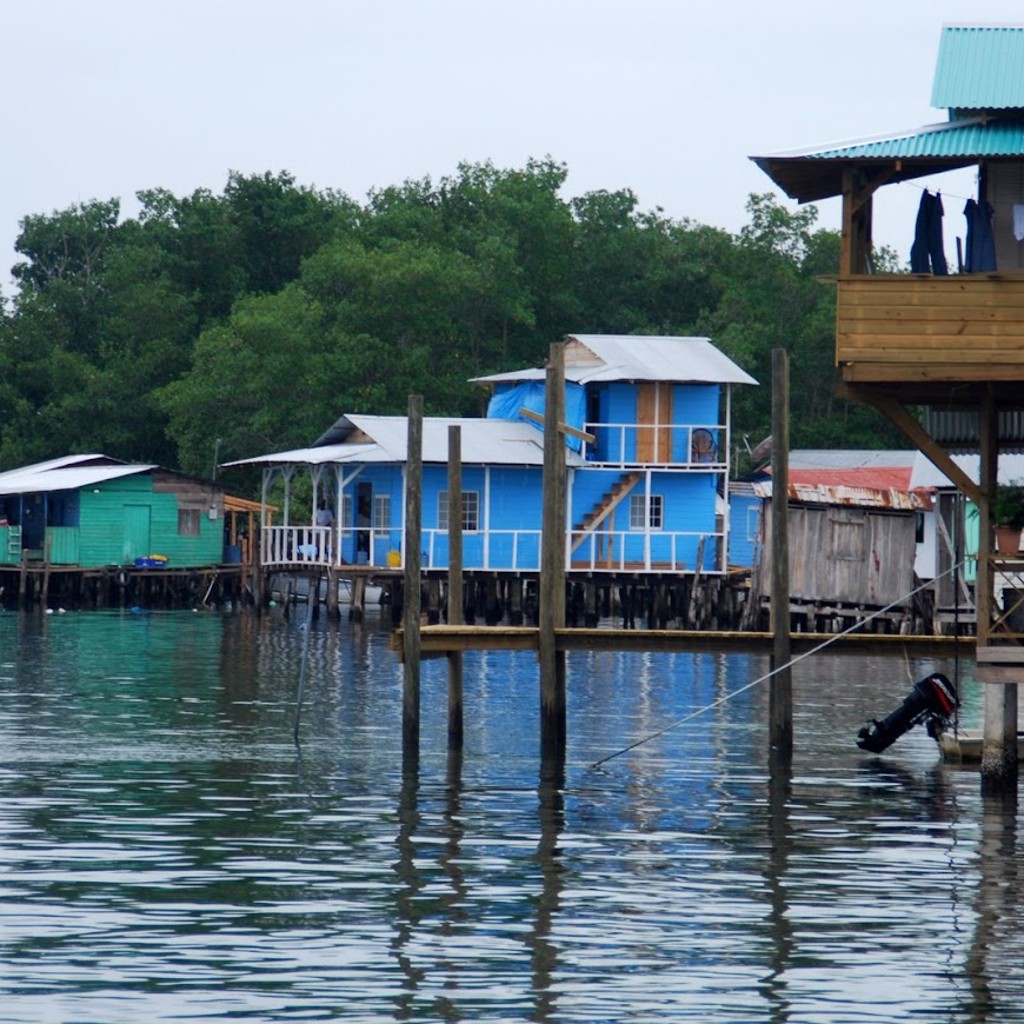 All roads lead to Panama

On the way back a bit disoriented I took a “short cut” and ended up being chased by a fully armed paratrooper. Somehow I had wandered into the President of Panama’s compound and didn’t hear him yelling.

The road wound increasingly higher up through the clouds, by now the traffic had reduced to the occasional pickup truck and the odd horse but otherwise it was pretty much deserted. We had just reached the cusp of the Continental Divide, where for a moment you could just see the Pacific on one side and far off in the distance on the other coast was the Caribbean Sea. Above us towered Volcan Baru, Panama’s highest point, flanked on all sides by lush thick rainforest as far as the eye could see. Compared to Costa Rica, Panama’s roads were in great condition, then again there are basically three main roads in the whole country, The Trans America Highway that almost runs the length of the country and two roads that cross through the middle.

As we cross the divide it is amazing how within minutes the country has changed, not so much the terrain but the level and style of development. On the Pacific coast the foreign money is moving in, with planned retirement villages and resorts dotted from the Costa Rican border through to Panama City. However, most of the land on the Caribbean side of the nation is a wilderness area, just off the main road were villages with thatched roofs, where the local tribes exist exactly as they have for thousands of years. Also hidden amongst the rainforest are 15,000 US Marines, working on infrastructure projects, improving the water systems, building schools etc. I guess that explains the quality of the roads in Panama! Later on we passed a regiment of Engineers building a hospital, all decked out in the latest worksafe gear – a far cry from the local building sites with their bamboo scaffolds.

Panama is the midst of a property boom, everywhere you look changes are happening at a very quick pace. It makes you wonder what is so bad about retiring in the States when everyone is looking south. Then you start asking questions and you work out how easy and cheap it is to get an investment visa, an apartment in the city and a house in the hills, a full-time maid, and it starts to become clear.

They predict that within 10 years there will be one million Americans in Panama, quite overwhelming for a country with a current population of 3.5 million! Must say though, beautiful country, great weather, incredible natural wonders, vibrant capital city, stable government, no army – sure beats many parts of USA. No need to worry about the neighbors either coz Costa Rica and Colombia are puppet states of the US as well.

We took the long road into Panama, 9 hours on a local bus from San Jose – which included an hour at a very confusing border. I think I handed a “tip” to every second person, it was hard to work out which country we were in. I’m sure the stamps in my passport say “You just paid a dollar for nothing”!

Our first destination in Panama was Boquete, a pretty town at the foot of the now dormant Baru Volcano – they say that this area is the breadbasket of Panama, 80% of the fresh produce is grown on the rich slopes of the mountain. We were there during Semana Santa and inadvertently got caught in the midst of a parade on Good Friday, just bowed the head, looked solemn and tried to refrain with the religious jokes for a few minutes before we found refuge in a cave, ok no cave but couldn’t help myself.

The real highlight was a tour of the Kotowa coffee factory. In 3 hours we learned everything you ever want to know about the stuff and can now appreciate the difference between most of the junk on the shelves in the supermarket and the world class stuff. We found out why Panama has won the worlds best coffee trophy for two years running. A long story but basically 20 years back, other countries invested in new technology and grafting concepts to increase their yields whilst Panama couldn’t afford to do this as the country was basically at war and nobody would invest here. Anyway 4 or 5 years ago it was discovered that the new system made lower quality coffee so Brazil, Colombia, Jamaica etc are going back to the old ways and Panama is way out in front. We also learnt that Free Trade coffee doesn’t support those it should, it’s more about the teaching the pickers to pick the bean at the perfect time, anyway long story – we can leave that for now. Afterwards we sampled a few varieties which was brave given that none of us touch the stuff and given that we hated the best coffee in the world it looks like there is no chance of me joining anyone for a latte in South Yarra anytime soon. I did however buy some beans for the office, so currently everything in my pack smells of world class Arabica and will for a long time to come – should impress the beagle at Tulla anyway!

Ok, enough about coffee! Our second destination in Panama was Bocas del Toro, a group of islands, mostly uninhabited just off the Caribbean coast. We stayed in a rented room on the island of Carinaro, a small atoll where Christopher Columbus used to stop to clean his ships in the early 1500’s, it seems that 500 years of junk had built up on the island and it was quite ugly. The Pickled Parrot where we were staying was a restaurant/bar that sat over the water. Despite the positive fact that they played Jimmy Buffet’s music constantly and had a lovely view we decided on arrival that the guy had such an attitude that we would only stay a couple of days and move on. He was similar to many expats on the islands that had “escaped” to Bocas but were still whinging about the same things that they had escaped from…all looking for “Margaritaville” which in reality can only exist in ones own imagination.

A day trip out to nearby Isla Basimentos National Park was the highlight so far of our trip. We snorkeled off the beach of a beautiful island with a white sand beach, aqua blue water, thick rainforest teeming with wildlife that ran right to the shoreline, lots of colourful fish and uninhabited apart from the park ranger who wanted $5 for the privilege of visiting his piece of paradise. Last year Survivor Panama was filmed on a neighboring island and it really made you appreciate, despite the beauty how rugged the conditions were.

Flying from Bocas to Panama City was a lot of fun, given the plane was circa 1950 and a storm was brewing. Despite Sheridan preparing to be in the 3rd series of “Lost”, by reciting scenes word for word…as she does, me dreaming of Kate and Michelle of the Doctor, it was actually an uneventful flight and an hour later we flew over the miniature Sydney Harbour Bridge known locally as “The Bridge of The Americas” and arrived here slightly disappointed not to be marooned on a beach but looking forward to a taste of the city.

It feels like we are living here, we have an apartment in a brilliant B&B which was a former residence of a senior army officer in the US Canal Zone. It is halfway up Ancon Hill, a small mountain in the middle of the city covered in rainforest. The other morning I ran to the top well before the heat of the day and after getting my breath back I surveyed the city below me. In one direction the canal stretched out with ships patiently waiting their turn to go through the locks, whilst in the other direction the city, first the old quarter below then the new part disappeared into the horizon for over 20km. On the way back a bit disoriented I took a “short cut” and ended up being chased by a fully armed paratrooper. Somehow I had wandered into the President of Panama’s compound and didn’t hear him yelling coz I had Mana blasting through my ipod! You can only imagine how fast my heart was beating then!

Having spent a few days here visiting nearly every district you appreciate all the different zones and the unique way the city has grown. First there is Panama Vieja, the original city, now in ruins, built in the 1500’s. They then moved it a few miles down the road and built a new city in the 1700’s. Then in the late 1800’s first the French, then the Americans built another new city at the mouth of the Canal, this was in American hands until 1999 when it was handed back to Panama. In between you have your typical Central American slums amongst art deco buildings and on reclaimed land near the original old city you have a brand new city with dozens of skyscrapers and mega shopping malls. Confused? Don’t worry there is more to come with plans announced this week of a massive development in the former canal zone that will rival what is happening in Dubai. We saw pictures of Trump Tower which looks suspiciously like Burj Al Arab! I even read that Singapore Airlines are investing millions in a new aircraft servicing complex just down the road!

Yesterday we visited Miraflores Locks, watched a ship go through then spent a couple of hours in the museum, earlier in the week we wandered through the old colonial part of town which looked very much like Havana, much of it in really poor condition. I wish they would spend more time and money restoring some of their history rather than constantly breaking new ground in fresh areas, already the traffic is crazy yet in the middle of the city there are rows and rows of desolate buildings whilst the new city composed of row upon row of lacklustre skyscrapers just gets bigger and bigger extending along the shoreline. We have done civilized stuff like hang out at shopping malls, go to the races and generally just absorb ourselves into the lifestyle of the city. This weekend we are doing a tour that takes you though the canal on board a ship which will be pretty excited. I’m not going to go on about it but once you have read everything there is to read about it and you witness the enormity of the project and remind yourself that it is nearly 100 years old you soon realize that the Panama Canal is the greatest engineering feat ever achieved by mankind. There you go, I managed to cover the canal in one sentence and didn’t even get overly excited about it.

On Sunday we are going to join the throng of locals that catch a ferry out to Taboga Island, little church, white sand beach, no cars sounds nice! Well that is about it from me, next week we are off to Cartagena in Colombia which I have been looking forward to returning to for 25 years now! I hope I haven’t bored you too much with politics, I even forgot a whole piece that I was going to write about deforestation of Darien Province which is a result of the fact that the Trans America Highway has almost reached the Colombian border – actually that was supposed to be the irony in the title as that road leads out of Panama. Ok, I admit it, the heat is getting to me – it is time to sign off but before I do I’m going to see if I can get a few good night shots of the bridge!